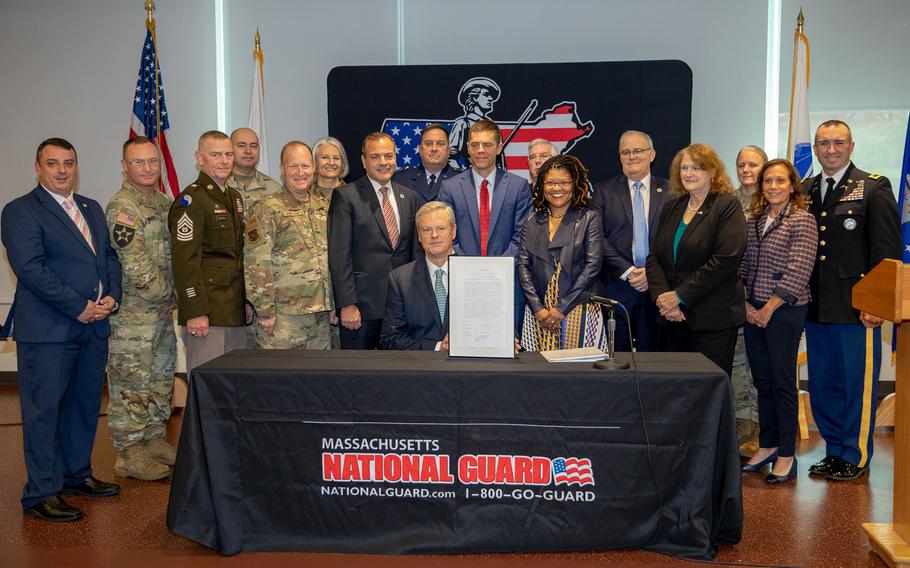 Gov. Charlie Baker formally signed a law that will make it easier for military spouses to expedite the transfer of professional licenses if they move to Massachusetts because their husband or wife is transferred to a base there. (Massachusetts National Guard)

(Tribune News Service) — Gov. Charlie Baker formally signed a law that will make it easier for military spouses to expedite the transfer of professional licenses if they move to Massachusetts because their husband or wife is transferred to a base there.

The law also will grant "in-state" status at public colleges and universities to any active-duty military member, their spouse or children, thereby allowing them to pay a much lower tuition. It also allows moving families to enroll students in school in advance and without having to physically appear so they miss little to no class time.

Sen. John Velis, D-Westfield, a major in the U.S. Army Reserve, first filed the bill Feb. 16, 2021, to ease the transition a family needs to make when a member of the military is transferred to a base in Massachusetts. It was approved by the House and Senate unanimously, went to conference committee where differences in the proposals were reconciled on July 28 and received a final vote from legislators the next day.

"At the most fundamental level, this law is about recognizing that when an individual signs up for the United States Armed Services, it is not just them that is signing up, it is their entire family," he said.

Baker signed the Spouse Licensure Portability Education and Enrollment of Dependents act, better known as the SPEED Act, in a ceremony at Hanscom Air Force Base in Bedford on Tuesday with multiple military and veterans officials watching.

"The SPEED Act makes Massachusetts a more welcoming place for military families transferring here by streamlining the occupational licensing process so military spouses can continue their professional careers and by making it easier for those families to access educational opportunities in the Commonwealth," Baker said.

The law comes as Barnes Air National Guard Base, in Westfield, is one of several being considered as a home for the new F-35A Lightning II fighter jets, which would be an upgrade from the F-15 Falcon jets the 104th Fighter Wing has been flying since 2007.

The new law could give the base an edge over others when the military is making the decision.

"From speeding up the professional licensure process for military spouses so that they can continue their careers, to allowing advanced and virtual enrollment for military children to resolve disruptions in education, this law ensures that we are taking care of our military families here in Massachusetts," Velis said.

The law creates a 30-day expedited certification process for spouses applying for licenses from the Division of Occupational Licensure and the Department of Public Health if they are credentialed in another state and meet necessary requirements, according to an announcement from Baker's office.

Teachers licensed in another state will be granted a three-year teaching certificate so they can work immediately while completing testing requirements for their regular license, it said.

"This is a historic bill. This is most likely the most encompassing military and veterans bill passed in the Commonwealth in the last century," Major Gen. Gary W. Keefe, adjutant general of the Massachusetts National Guard, said during the ceremony. "This bill will make it clear to every state in the republic that Massachusetts is unmatched in its care and support of its military members, veterans, and their families."

The law also grants new benefits and services for veterans and National Guard members and expands the ways the state recognizes service members, the statement said.

— Establishing the Massachusetts Medal of Fidelity to be awarded to the next-of-kin of service members who died as the result of service-connected diseases, conditions, or injuries, including PTSD, traumatic brain injury, or exposure to harmful toxins.

— Establishing resources for service members exposed to burn pits and airborne hazards, and requiring the state to assist service members in signing up for federal Veterans Administration burn pit registry;

— Establishing a $2,000 tax credit for businesses with less than 100 employees who hire and retain National Guard members.