A profound change is coming to American school buses A common smell of American childhood, the diesel fumes wafting through yellow school buses, may soon be obsolete, as school districts across the nation turn to electric buses amid falling costs and growing concerns about global warming.

The shift would spell a major change to children’s experience of school, replacing the sweet-noxious scent of diesel with the whizz and whir of electric motors underneath a school bus floor. The rollout is happening quickly — orders expanded more than tenfold since the beginning of 2021 — and the Biden administration aims to speed it up even faster with a Wednesday announcement of the winners of $965 million in subsidies for electric and low-emissions bus purchases around the country. Some advocates say they are hopeful they can electrify the entire American school bus fleet by 2030.

Proponents argue that school transportation is a natural candidate for electrification, since the buses operate on fixed routes with regular breaks that can be used to charge batteries. They say the children most dependent on school buses to get to classrooms — students of color and lower-income families — also suffer disproportionately from asthma and other illnesses that are worsened by constant exposure to diesel fumes. Studies also show that exposure to pollution worsens school performance.

“We are forever changing school bus fleets across the United States,” the head of the Environmental Protection Administration, Michael Regan, told reporters ahead of the announcement, which he planned to make with Vice President Harris in Seattle.

Although the upfront cost of electric school buses can be up to four times more expensive than their rumbling combustion-powered forebears, advocates and climate-friendly policymakers are trying to find ways to make up the difference. Already, fuel costs are lower, and so is maintenance, since electric buses have fewer parts that wear down. 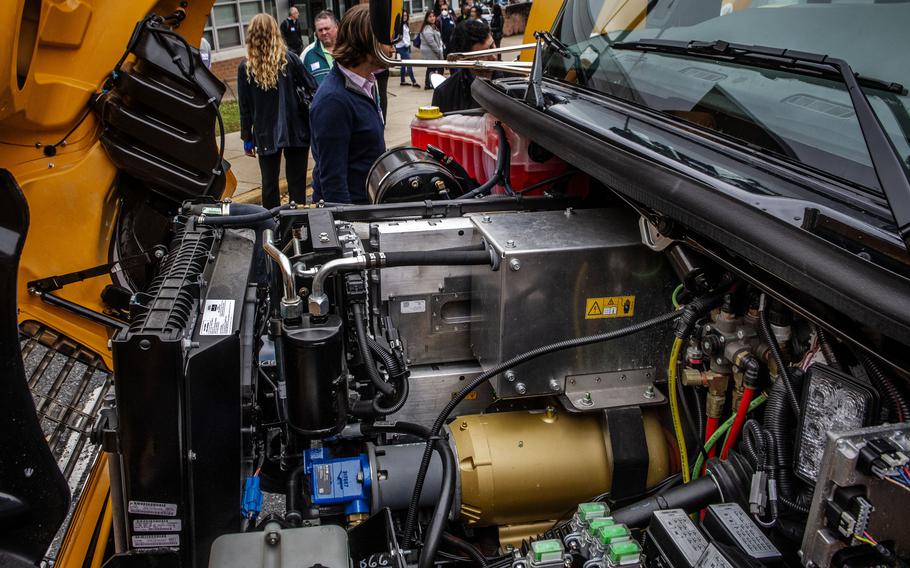 Hoods up for inspection during a news event in Bethesda, Md. (Bill O'Leary, The Washington Post)

Diesel engines account for nearly a quarter of the U.S. transportation sector’s greenhouse gas emissions. Burning the fuel is a significant source of harmful pollutants including ground-level ozone and particulate matter that can lead to respiratory diseases in children.

The Biden administration is trying to spur cheaper electric vehicles by supporting the U.S. battery industry and through incentives to school districts that it hopes will help spark more orders for buses, bringing down costs. Last year’s Bipartisan Infrastructure Bill funded the grants to be announced Wednesday, and it dedicates another $4 billion toward electric and low-emission school bus purchases over the next four years.

The result has been a burst of electric school bus purchases across the United States, including in the Washington, D.C., region, where Maryland’s Montgomery County Public Schools last year ordered the single biggest fleet in the nation, 326 of them by 2025. By the end of this school year, 86 will be on the road. The sprawling school district is a major consumer of diesel fuel, with its 1,400 school buses burning 17,000 gallons of diesel a day as they crisscross the roads. So, any effort to electrify them quickly has an impact.

“This project is momentous, not just because of its size, but because it demonstrates something pretty remarkable, which is that electrifying a municipal fleet is not a pipe dream. It’s not something that should be pushed off another year,” said Duncan McIntyre, the chief executive of Highland Electric Fleets, the company that the Montgomery County schools hired to deliver the buses along with the entire charging and maintenance infrastructure around them. The school system is paying the company $1.3 million annually for 12 years to lease the buses and provide the electricity for them, which it says is the same as it costs to buy, fuel and maintain diesel buses.

“This sets an example for the entire country,” McIntyre said. 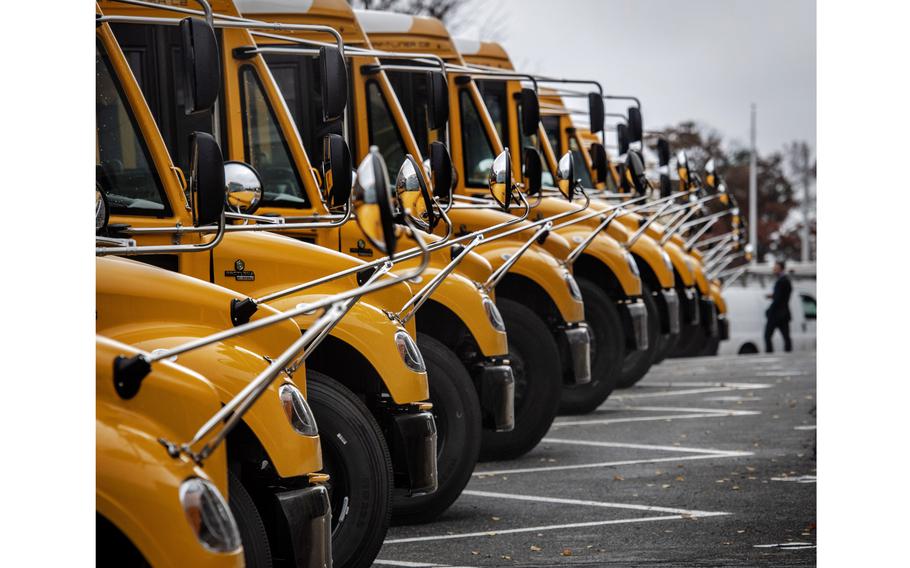 Montgomery County, Md., schools have placed an order for the largest electric fleet in the country, with Highland Electric Fleets in Bethesda, Md. (Bill O'Leary, The Washington Post)

More than a dozen of the new electric buses sat in the parking lot outside Walter Johnson High School in Bethesda, Md., this week. Had they been conventional diesels, they would have created a smelly cacophony as they idled. Instead, they were perfectly silent. When they pulled away, they made a slight whir, then a whine, as the electric motors whisked them forward. Inside the buses, the seats were just as tight as they were decades ago. But conversation was perfectly audible, and the dominant smell was of the fabric of the new seats and the wet air outside.

“Kids are going to grow up with this. They’re not going to know what it’s like,” said Rep. Jamie B. Raskin (D-Md.), whose congressional district encompasses much of Montgomery Country and who has pushed for greater funding for climate initiatives. “Your bus used to smell really bad? The transmission was always broken?”

Painted a shiny yellow, the buses were otherwise nearly indistinguishable in appearance from the diesel ones whose technology has barely evolved in a generation. The body was made by Thomas Built Buses, one of the largest bus manufacturers in the country. The electric guts — the batteries and the motors — were supplied by Proterra, which makes heavy-duty electric vehicles, including transit buses. Up front, where the engine normally sits, there were electronic components. Nothing rumbled.

At the school system’s Bethesda school bus depot, Highland has built a long new row of electric chargers where the buses replenish their batteries during their free hours. Doing so was a major undertaking: The depot used to have enough electric cables to keep on the lights and air conditioning for a couple of offices. Now it needs 10 to 20 times as much power, McIntyre said, about as much as 10 big hospitals. That’s one challenge in electrifying the national school bus fleet: doing so requires a lot more grid capacity than exists. That means more high-voltage cables, more transformers and substations — and a whole effort that will take time and cash. It’s the same problem facing other electrification efforts, as climate advocates urge a wider use of electric cars and a shift from gas stoves and furnaces to electric-powered ones.

Skeptics of efforts to electrify buses say the extra cash could better be spent on teachers, classrooms or lower taxes. They question whether the current price premium makes them first in line. Some say going slower might save money for school districts in the long run, if other industry efforts can do the work of bringing down the price of batteries over the next few years.

But statewide efforts are going even faster than national ones: In March, Maryland passed a law requiring all new school bus purchases to be electric by 2025. In April, New York required the same by 2027. Maryland buses have a 12-year operating life by law, so the transition will not be immediate.

To recharge electric buses, drivers pirouette backward into a parking spot at an angle so that a port near the rear end — hidden under a flap that looks just like a gas cap — can be connected to a charger with a cable. Charging from zero to full takes about four hours. Each bus has about 140 miles of range. Since the average bus route in Montgomery is about 65 miles, there’s little worry about running out of juice, unlike with municipal buses, whose longer routes and greater daily usage makes them more complicated to electrify.

“This is great. It’s really smooth,” said Johnny Chiang, who has been driving buses for the Montgomery schools for three years. “Diesels are much heavier to drive. This wheel feels much easier to control.”

When the buses aren’t in use, they can feed electricity back into the grid during hours of peak demand, acting as giant batteries that spare power companies the need to fire up extra coal-fired plants during hours when solar, wind and other renewable sources aren’t creating enough juice. Highland plans to start doing that in Montgomery Country later this school year, earning money from Pepco, the Washington, D.C.-area power company, in the process and further reducing its costs.

Electric school bus experts say they see a quick shift from where the market was in 2014, when the first handful of school buses were put into service, until today.

“It’s where the market is going and where the demand is moving,” said Sue Gander, the head of the Electric School Bus Initiative at the World Resources Institute, which is tracking the rollout of electric buses and advocating for policies that encourage their use.

“Within this next decade, we are going to be seeing electric school buses as the option of choice,” she said.