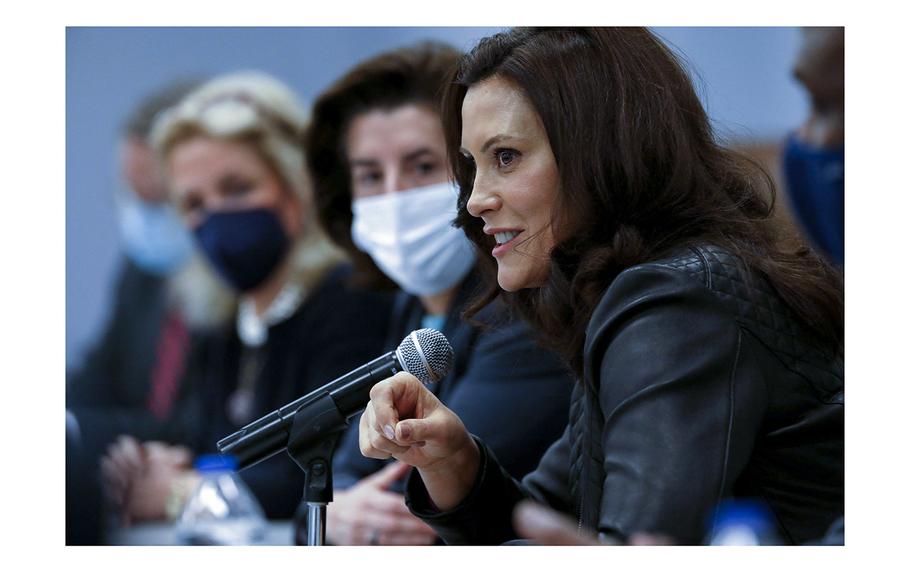 JACKSON, Mich. — Three men have been found guilty by a Jackson County jury of materially aiding a terrorist and being a member of a gang as part of a plot to kidnap Michigan Gov. Gretchen Whitmer.

This verdict comes after a three-week trial in which the Michigan Attorney General’s Office had to prove that Paul Bellar, Joseph Morrison and Pete Musico provided aid to Adam Fox or Barry Croft, both of whom were convicted in an August federal trial of being ringleaders in the Whitmer kidnapping plot. Jurors spent two weeks listening to each side present testimony in the largest domestic terrorism case in a generation that has shed light on political extremism in Michigan.

It also was the first state trial connected to the Whitmer kidnapping plot allegations. Croft and Fox are appealing their convictions.

The jury spent about five hours deliberating before coming back with the verdict. They found Bellar, Morrison and Musico guilty of providing material support to a terrorist, being a member of a gang and a felony weapons charge.

The men face up to 42 years in prison, 20 for the charges of providing material support and gang membership and an additional two years for a felony weapons charge. The gang membership sentence may run consecutively to other sentences. Sentencing for all three men is scheduled for Dec. 15.

Bellar looked down at the table as the verdict was read but had no visible response. His attorney, Andrew Kirkpatrick, said he was very nervous in the period leading up to the verdict and was practically hyperventilating in the elevator on the way up to the courtroom.

Morrison tested positive for COVID-19 Sunday and Musico showed symptoms, so neither was in the courtroom while the verdict was read. Over Zoom, both Musico and Morrison closed their eyes, and Morrison appeared to cry.

Prosecutors argued that the three men were early members or founders of the Wolverine Watchmen militia, which helped to train Fox and Croft for their plot to kidnap Whitmer, a Democrat.

“They promoted terrorism, they sought out terrorists and when they found them, they trained them,” Assistant Attorney General Sunita Doddamani said during closing arguments. “(Wolverine Watchmen) was a blueprint for Adam Fox to learn from.”

“These three defendants had been pushing toward violence for months,” Doddamani said. “Even if they weren’t going to do an act of terrorism themselves, they were more than happy and willing to help someone else.”

The FBI was able to take down the plot before any violence occurred by infiltrating the militia and using confidential informants and undercover officers to build their case.

“Instead of only reacting to known threats, it is imperative that law enforcement be proactive in order to save lives,” Attorney General Dana Nessel said in a statement. “This office will not sit idly by and watch while armed terrorists plan acts of civil unrest with the intent of causing mayhem and murder. These are not merely acts of ‘harmless chatter’ and ‘wishful thinking.’ These are criminal conspiracies to conduct dangerous acts, and it is incumbent upon law enforcement to treat this activity as such. Make no mistake, the quick actions of law enforcement saved lives. We are pleased the jury clearly understood that.”

The AG’s case rested heavily on Bellar’s, Morrison’s and Musico’s own words, from audio messages, Facebook posts, text messages and audio recorded by one of the FBI’s confidential informants.

They gave Fox a blueprint to learn from, Doddamani said. They taught to him recruit, organize and train a group of operators, about operational security, about vetting potential members and firearms training.

“Don’t underestimate the dangerousness of the defendants and the men they were helping,” Assistant Attorney General William Rollstin cautioned the jury before they left the courtroom to deliberate Tuesday.

Whitmer said in a statement Wednesday that the guilty verdicts are further proof that “violence and threats have no place in our politics.”

“Those who seek to sow discord by pursuing violent plots will be held accountable under the law,” Whitmer wrote. “This trial is another stark reminder that we must take an honest look at the state of our politics. Politically motivated plots, threats, and violence are increasingly common against public officials as well as everyday citizens. They are the logical, disturbing extension of radicalization, hatred, and conspiratorial thinking that festers in America, threatening the foundation of our republic.

“I love Michigan. I always will. I will not let anyone get in the way of the work we do. No threat, no plot, no rhetoric will break my belief in the goodness and decency of our people.”

Musico’s attorney, Kareem Johnson, said he was “disappointed” with the verdict, but still believes Musico is innocent, as do other members of the Wolverine Watchmen Johnson talked to. Johnson said they were afraid to testify in case they ended up charged. Johnson said he planned to appeal several things after the sentencing.

“It’s hard to know what the jury is going to latch onto,” Ballard said. “Walking out yesterday I thought a not guilty verdict was coming back,” adding that he was surprised by how quickly the jury returned a verdict.

Bellar’s attorney, Andrew Kirkpatrick, said he was surprised and disappointed by the verdict. He added he was frustrated with the prosecutors, who he said jumped around the timeline and cherry-picked the audio and text messages they used in the case.

He said it was clear Bellar left the state before the plot was formulated and he was not a part of it. When he left, he had not broken any laws or committed any violence, Kirkpatrick said, and he wasn’t part of any trainings or discussions about the plotted kidnapping.