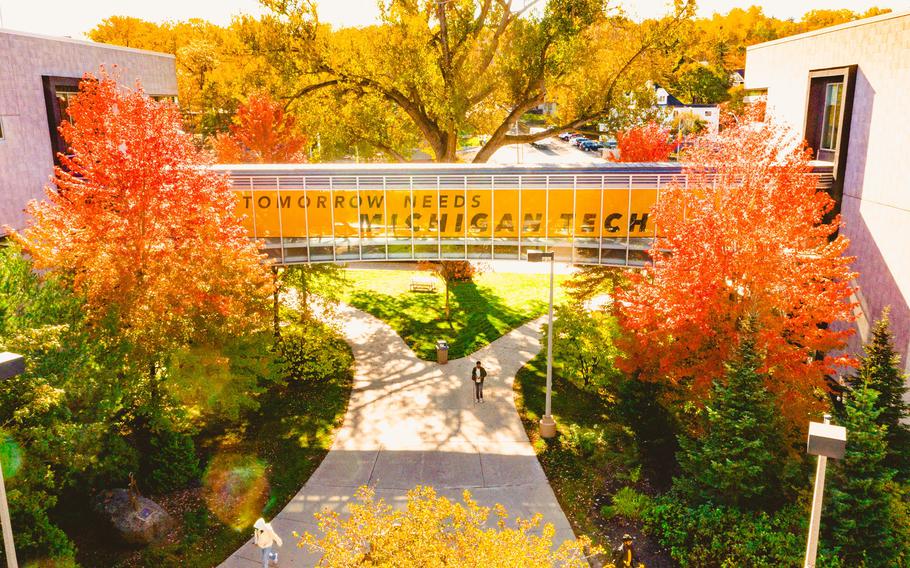 (Tribune News Service) — It’s edible, the stuff being produced in Stephen Techtmann’s lab. Or it’s meant to be.

It doesn’t smell bad, he said, a bit like a yeast extract or the Australian food spread Vegemite.

But he hasn’t tasted it. First, he wants to know it’s safe, free from anything that might be toxic. It is, after all, made from plastic.

Techtmann, a microbiologist at Michigan Technological University, and collaborators from Michigan Tech and the University of Illinois, are in the midst of a project that seems half-miraculous: turning plastic waste into edible protein.

“It does kind of seem sci-fi to be able to say that we’re going to convert plastic into something that you can eat,” Techtmann said.

The secret ingredient is microbes that can feed on plastic’s component parts, including a substance that resembles synthetic crude oil.

“We would never want to feed plastic to people,” Techtmann said, “but we can use microorganisms to produce biomass or proteins using plastic as an input. And so what we’re trying to do with this is to take plastic, break it down, feed it to microorganisms and then recover those microbial cells as a food product.”

The organization interested in the technology is the U.S. Most of the funding, some $7.2 million, comes from the Defense Advanced Research Projects Agency, better known as DARPA, whose past endeavors are at least partly responsible for the existence of the internet, GPS technology, self-driving cars and, on a less victorious note, the chemical defoliant Agent Orange.

Microbes are Techtmann’s specialty. Five years ago, he received a DARPA Young Faculty Award for devising a way to track the past movements of ships based on the microbes found in their bilge water (different ports around the world have different microbial signatures.)

But it was his work on oil spills, begun in 2010 after the Deepwater Horizon spill in the Gulf of Mexico, that laid the groundwork for the plastics project.

“What we were doing there was trying to be proactive and really check to see if there are bacteria in different places around the ocean that we can use to help clean up potential oil spills,” he said.

After he arrived at Michigan Tech in 2015, he started doing similar work in the Great Lakes “because of the issues surrounding Line 5 and some of the concerns about a potential spill there.”

But he began to wonder if there was a more proactive approach, a way of preventing environmental damage rather than responding to it.

Then, in the fall of 2019, DARPA put out a solicitation for project proposals.

“Like much of the world, (the Department of Defense) has a significant plastic waste footprint,” said Seth Cohen, a program manager in DARPA’s Biological Technologies Office, “and it’s one that we’d like to both mitigate and make useful, potentially.”

On average, each deployed member of the U.S. armed forces produces more than a pound of plastic waste per day, he said, largely water bottles and the packaging for meals.

Portable systems that can turn plastic waste into useful projects like lubricants and food isn’t just good for soldiers in combat, he said, but it could be a way “to avoid conflict by providing food security and stability to maybe undernourished populations.”

The first step, Techtmann said, was “looking at samples from relatively mundane places like mud from streams or compost from a nearby farm to see if there were any of these bacteria in these natural places that could do this.”

Microbes mostly don’t feed on plastic, but some do feed on the components of plastic. So part of the work of making plastics into something edible is making them into something microbes can eat.

David Shonnard’s focus is on the plastics used in the bags that contain the meals ready to eat. With a heating process called pyrolysis, the Michigan Tech chemical engineer can reduce polypropylene into a wax, a gas and an amber liquid that’s something like synthetic crude oil.

“Natural microbes have been adapted over the years, over the millennia really, to metabolize crude oil,” he said, but it was still a “eureka moment” to discover that they would also eat the synthetic stuff.

“To me, that’s just incredible,” he said, “something that the microbes have never seen before ever. And they’re growing on it.”

Rebecca Ong is also working on breaking down plastics, though she’s using a chemical process not entirely dissimilar from what microbes use to break down plastics in nature. Her process is faster.

The microbes will be both the consumers and the consumed. After they eat the deconstructed plastic, grow and multiply, they’ll become the food. The idea is that they’ll be dried into a powder that could be mixed into smoothies, added to animal feed, maybe someday even 3D printed into something that looks like a steak.

They’ve gotten the process to work in the lab, said Ong, a chemical engineering professor at Michigan Tech, and to work pretty quickly, too. But the team still isn’t getting the yields they want.

“What we’re trying to do in the next few months is get that yield up,” she said, and to make sure that all the components of the system fit within a three cubic-meter space, small enough to be deployed on the back of a truck in combat zones or disaster relief operations.

What makes the project compelling, Techtmann said, is that it has the potential to address two big challenges, plastic waste and food insecurity, all at once.

“I think what we’re doing is really cool, and we’re potentially going to contribute to helping to solve some of these problems,” he said, “but it’s going to take a lot of other people and a lot of energy and a lot of expertise.”