A 90-something in line of presidential succession? Experts say it's time for a change. 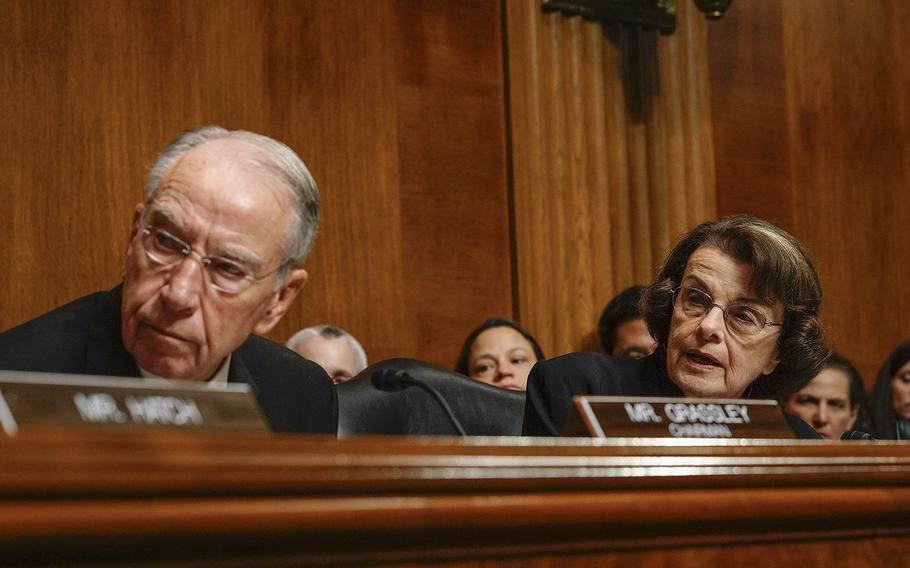 WASHINGTON - If Democrats thread the needle just right next month, Sen. Dianne Feinstein would be in line for a prominent prize.

The Californian, as the most senior Democrat in her caucus come January, could assume the position of Senate president pro tempore. The post comes with a security detail from the U.S. Capitol Police and a budget for staffers that rose from a little more than $100,000 in 2011 to almost $720,000 in 2019.

Feinstein, 89, also would be third in the line of presidential succession, behind the vice president and the speaker of the House. But she has decided that the pro tem position is not for her.

"I've never thought about being the president pro tempore and I have no interest in it at this time," Feinstein said Friday in a statement provided to The Washington Post.

Her Republican counterpart, Sen. Charles E. Grassley, also 89, has made the opposite call. Should Iowans hand him an eighth six-year term, as is expected next month, Grassley would accept the position of president pro tem, his office confirmed to The Washington Post, and he would leave decisions about the line of succession up to others.

But historians are expressing concern, particularly as political violence is on a dramatic rise, about a line of succession that runs to a senator who is particularly old and might be a less-than-optimal choice during a national crisis.

"Whether it is a Strom Thurmond, a Dianne Feinstein, a Chuck Grassley or any other octogenarian who might occupy the position, this is no way to run a succession process," said Norman Ornstein, a scholar at the American Enterprise Institute who has studied continuity of government for decades.

Also concerning to the experts is that to an unprecedented extent, the federal government is being overseen by octogenarians.

President Biden, the oldest ever to occupy the Oval Office, turns 80 next month. House Speaker Nancy Pelosi (D-Calif.) is 82, Senate Minority Leader Mitch McConnell (R-Ky.) is 80. The current Senate president pro tem, Patrick J. Leahy (D-Vt.), this summer suffered a fall that left him with a broken hip and he recently spent a night in the hospital after not feeling well. Leahy, 82, is retiring at the end of this term, leaving the position open for Feinstein or Grassley.

"We need a new generation," Rep. Elissa Slotkin (D-Mich.) said recently on NBC's "Meet the Press," focusing mostly on her party. "We need new blood, period, across the Democratic Party, in the House, the Senate and the White House."

Thurmond (R-S.C.) was president pro tem of the Senate from 1995 into 2001, into his late 90s, which was roughly the last time any serious thought was given to changing the rules of presidential succession. Even with Feinstein saying no, Sen. Patty Murray (D-Wash.) is in line to become president pro tem if Democrats hold the majority.

Murray, 72 and well respected, has been in Democratic leadership for more than a decade, but the self-proclaimed "Mom in tennis shoes" has never aspired to a role much bigger than her current job of chairing the Senate health committee.

The Senate's president pro tem was never meant to be an elder in the twilight of her or his career. In the 19th century and up through World War II, the post often went to younger senators who were viewed as real leaders, according to Steven S. Smith, a political science professor at Washington University who is co-writing a book on the history of Senate leadership.

Since the late 1940s, the position has been largely ceremonial, with duties such as opening daily debate in the Senate and, as the titular head of the chamber, signing legislation that is to be sent to the president. 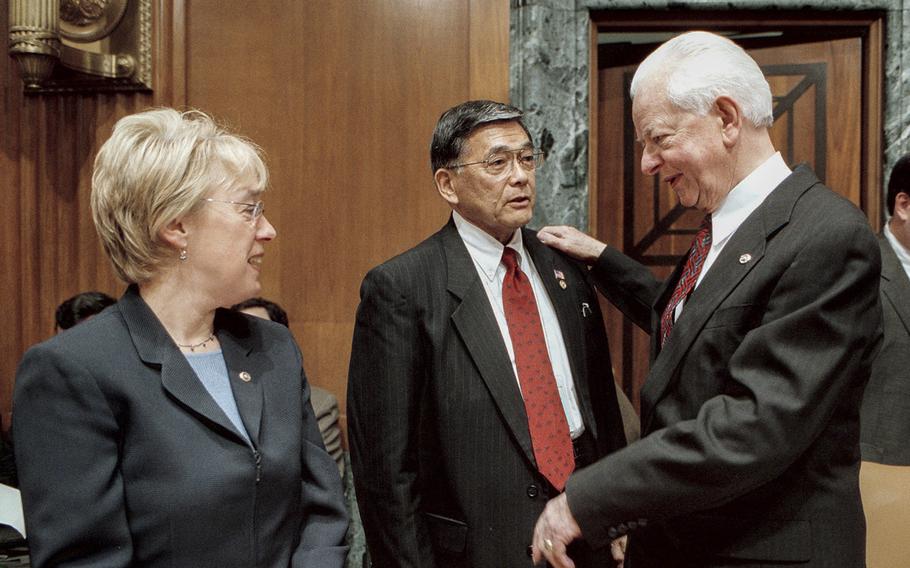 Then-Sen. Robert C. Byrd, D-W.Va., speaks with then-Transportation Secretary Norman Mineta, center, as Sen. Patty Murray, D-Wash., looks on before a hearing on Capitol Hill in June 2002. At the time, Byrd was 84, and his duties in the Senate included being president pro tempore of the chamber. (Ray Lustig/Washington Post )

On Sept. 11, 2001, the day of the terrorist attacks, then-Sen. Robert C. Byrd, D-W.Va., 83, who had succeeded Thurmond as president pro tem, wandered around the East Front of the Capitol grounds with no police detail, telling reporters that he had no idea what was happening and planned to go home to Virginia.

The president pro tem has had a security detail ever since, and on Jan. 6, 2021, just a couple minutes after then-Vice President Pence was taken from the Senate chamber to safety, Grassley - who held the pro tem position from 2019 into early 2021 - was rushed out of the chamber. The other Senate leaders, Charles E. Schumer (D-N.Y.) and Mitch McConnell (R-Ky.), remained behind because Grassley was in the line of succession.

Feinstein agreed two years ago to step aside as the top Democrat on the Judiciary Committee after questions about her ability to run such an important panel. Her decision to forgo pro tem, if Democrats win the majority, follows on that.

But Grassley fully intends to take the position if Republicans win back the majority.

"Senator Grassley has indeed considered the gravity of the line of succession, since he previously served as president pro tempore. Nobody relishes the idea of a country losing its top three elected leaders, but Senator Grassley was and continues to be clear-eyed about the duties of the [position]," Grassley spokesman Taylor Foy said.

Grassley has been sensitive to age questions for several years, and at the start of a campaign asking voters to give him a term that would end when he was 95, one of his first ads showed him on his morning run and doing push-ups. He does not consider age an issue for the line of succession.

"If the objective is to restrict who can be in the line of succession simply based on age, what age would be an appropriate cap? At what point," Foy said, "do you age out of being the speaker of the House, or a Cabinet head, or VP, or president for that matter?"

Ornstein finds that line of rhetorical questioning ludicrous. He is working with a group of continuity-of-government experts that plans to recommend revisions to the 1947 law, the most recent governing the succession, to eliminate the House speaker and Senate president pro tem from the line and just have the vice president and other Cabinet officials.

Short of that overhaul, he said, "they definitely need to change the [president pro tem] custom."

Smith, who is writing a Senate leadership history, views the issue through the lens of almost historical accident - the president pro tem was never intended to be such an aged member of the Senate just performing perfunctory duties.

By 1845, Smith said, party caucuses became more formalized, and, decade after decade, the chairs of those caucuses grew more powerful, eventually taking majority and minority leader as their titles. In 1947, a new line of succession law placed speaker and Senate president pro tem after the vice president. That coincided with the adoption of the custom by which the most tenured senator in the majority takes the post.

Ritchie recalled that after President John F. Kennedy's assassination in 1963, Sen. Carl Hayden (D-Ariz.) was well into his 80s and made a promise that he would never get near the Oval Office.

"If the presidency came his way," Ritchie said, "he would immediately resign and let the Senate choose someone else."

Smith would prefer to change the succession law now rather than, in such a crisis, see an elderly senator actually decide to take on the job.

"Then it's too late if you find that your president pro tempore is not up to the job of president," he said.