Bannon sentenced to four months prison for contempt of Congress in Jan. 6 probe 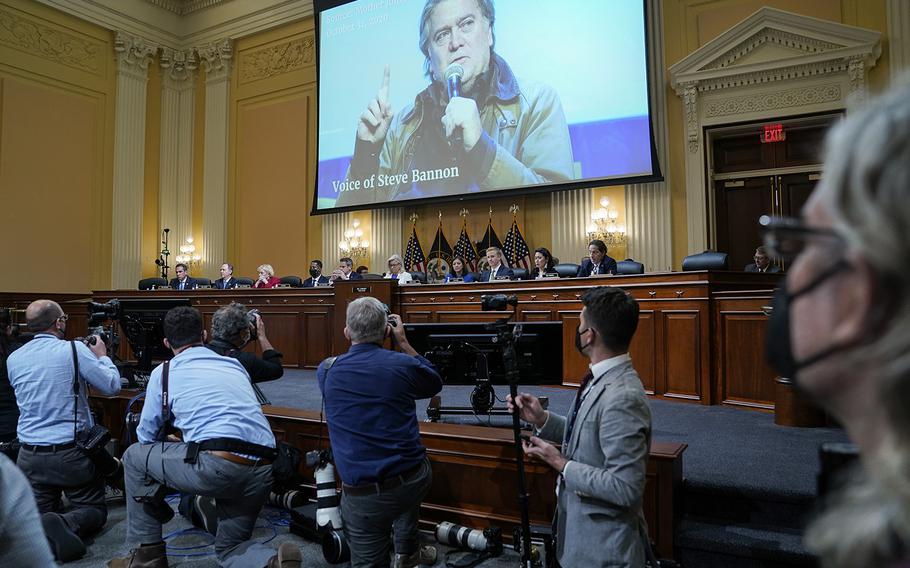 Stephen K. Bannon is seen on the screen during a hearing by the House select committee investigating the Jan. 6, 2021, attack on the U.S. Capitol. (Jabin Botsford/Washington Post)

Podcaster Stephen K. Bannon, a longtime adviser to former president Donald Trump, was sentenced Friday to four months in prison and fined $6,500 for refusing to cooperate with a congressional investigation into the Jan. 6 riot at the U.S. Capitol.

Bannon is set to become the first person incarcerated for defying a congressional subpoena in more than half a century under a statute that is rarely prosecuted. The judge said he would stay imposition of the penalty pending Bannon's expected appeal.

Bannon's case is likely not to be the final clash involving the work of the House select committee investigating the 2021 Capitol riot and preceding events, as lawmakers voted last week to issue a subpoena for testimony and documents from Trump himself.

"Flaunting congressional subpoenas betrays a lack of respect for the legislative branch, which exercises the will of the people of the United States," U.S. District Judge Carl J. Nichols said. Bannon "has expressed no remorse" and "has not taken responsibility for his refusal to comply with his subpoena."

Bannon was convicted at trial in July on two counts of contempt of Congress for refusing to respond to requests for testimony or documents to the committee. Both misdemeanors are punishable by up to one year in jail. But Bannon has said he plans to appeal his conviction because Nichols ruled that Bannon could not argue at trial that he relied on his lawyer's advice or believed his cooperation was barred by Trump's claim of executive privilege.

Prosecutors asked for six months in jail and the maximum $200,000 fine, saying in a court filing that Bannon showed "a total disregard for government processes and the law" in ignoring the congressional subpoena while smearing the House investigation and the justice system with "rhetoric that risks inspiring violence." Bannon asked for probation, saying that a mandatory-minimum jail sentence is unlawful because his intent was not criminal or "willful," and that if one is imposed he should remain free pending appeal.

At his sentencing Friday, Bannon declined to speak in his own defense, telling the judge, "My lawyers have spoken for me, your honor."

The committee had wanted to ask Bannon about his role in efforts to pressure Vice President Mike Pence and Republican lawmakers into refusing to affirm the 2020 election results, culminating in the mob assault on the Capitol. Lawmakers in their subpoena noted that Bannon was involved in Trump supporters' strategy meetings the day before the riot; predicted "all hell is going to break loose tomorrow"; and, according to the book "Peril," by Washington Post writers Bob Woodward and Robert Costa, Bannon told Trump a few days earlier that they were "going to bury Biden on January 6th."

At its last public hearing earlier this month, the committee played audio of Bannon saying Trump would declare victory in the election no matter what the outcome. "That doesn't mean he's the winner, he's just going to say he's the winner," Bannon told associates from China a few days before the election. "He's going to sit right there and say they stole it . . . That's our strategy."

Executive privilege shields close advisers to the president from subpoenas related to their White House work. But Bannon left the administration in mid-2017 and was acting as a private citizen on Jan. 6. Prosecutors at trial and in their sentencing papers provided communications showing a lawyer for the former president never told Bannon's legal team that he should refuse to appear or that Trump was invoking executive privilege over any specific document.

At trial, Bannon was allowed only to argue that he thought deadlines to respond to the committee were just starting points for negotiation.

In their sentencing memo, prosecutors said that shortly before trial, one of Bannon's attorneys, M. Evan Corcoran, talked to a lead committee investigator "as part of a duplicitous quid pro quo" - proposing a strings-attached offer that Bannon testify to the committee in exchange for lawmakers helping end his prosecution. The government said the "stunt" was rejected.

On Friday, prosecutors said Bannon sought at every turn to make his prosecution about "retribution and politics" rather than his own conduct, and that they could think of no more egregious case of contempt.

Bannon, a "man of means and a public figure," chose to hide "behind a fabricated claim of executive privilege and advice of counsel to thumb his nose at Congress," said Assistant U.S. Attorney J.P. Cooney, chief of the fraud and public corruption unit of the U.S. Attorney's Office for Washington D.C.

"If the defendant intended to faithfully invoke executive privilege, to faithfully rely on advice of counsel. . . he would have shown up. But this defendant never lifted a finger to search for any document, produce a privilege log, or appear before the committee to invoke executive privilege as commanded," Cooney said. "Your honor, the defendant is not above the law, and that is exactly what makes this case so important."

Bannon's defense fired back that they agreed - Bannon should be treated exactly like any other U.S. citizen, not punished for what they said was following the advice of his attorney to preserve the confidentiality of communications with the president, even though he was no longer a White House aide.

"No American should make any apology for the way Mr. Bannon proceeded in this case," defense attorney David Schoen said. "God forbid we should ever want to deter an American citizen for honoring the values Mr. Bannon honored here."

Bannon "acted at all times in the lawful course our Constitution permits, and the only lawful course his lawyer told him was open to him once executive privilege was invoked."

Schoen repeated claims that Bannon was the victim of a partisan vendetta by an illegitimate congressional committee. "Allowing a committee to be the referee of its own authority and commands is tyranny," Schoen said, adding, "Mr. Bannon stands for the Constitution."

Schoen, in an aside, also lashed out at Trump attorney Justin Clark, calling him a "thug" and one of four legal "stooges" then working for Trump. Schoen defended President Trump in his second impeachment trial.

Another former Trump confidant, trade adviser Peter K. Navarro, is headed to trial on the same charges; the committee said they wanted him to talk about working with "Bannon and others to . . . change the outcome of, the November 2020 presidential election." On Bannon's podcast late last year, Navarro credited the host as "the hero on January 6," who had the "strategy to go up to Capitol Hill." As in Bannon's case, a federal judge found that Trump never invoked executive privilege to protect Navarro from cooperating with the committee investigation.

Bannon also faces trial in New York State Court on allegations that he orchestrated a scheme to steal millions from donors who believed they were helping build the wall along the U.S. border with Mexico. Bannon, who has pleaded not guilty, was indicted on nearly identical federal charges in 2020 but pardoned by Trump.