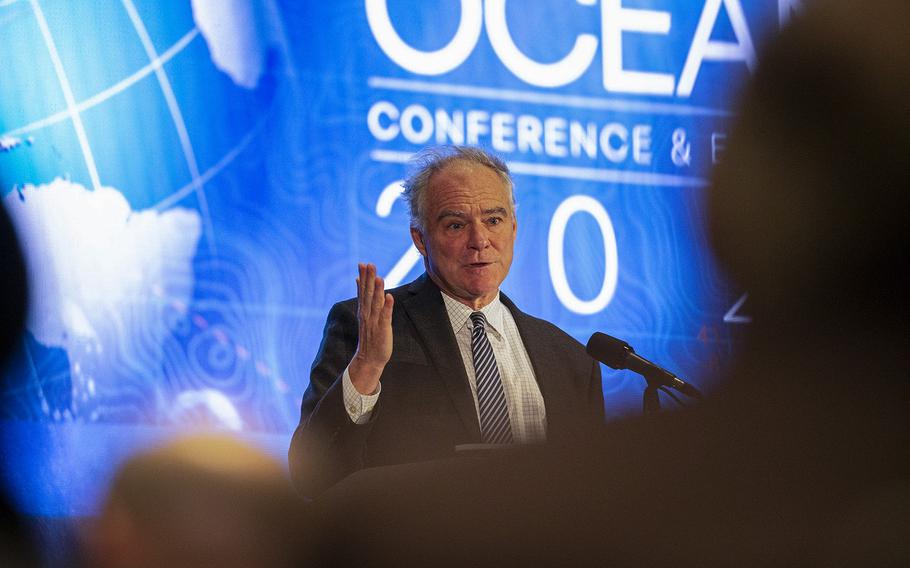 (Tribune News Service) — Sen. Tim Kaine said Tuesday that combating sea level rise and improving coastal resilience is not only a climate concern, but a matter of national security.

Kaine, chairman of the Senate Armed Services Subcommittee on Readiness and Management Support, called for smart spending with Inflation Reduction Act investments during a talk at the Ocean 2022 conference at the Virginia Beach Convention Center. The conference ends today.

Oceans 2022 is a United Nations-endorsed conference that continues through Thursday for ocean science and maritime professionals to share information and knowledge about research and innovations and to collaborate on projects. The Inflation Reduction Act, signed into law in August, is a massive tax and spending law that earmarks money for climate and energy investments.

The subcommittee focuses on preparedness, including maintenance and military construction. Sea level rise in Hampton Roads and other vulnerable areas can hinder military operations, Kaine said.

“Try to run the largest naval base in the U.S. when it is subject to tidal action and flooding multiple times a month,” said Kaine, a Democrat in his second term.

While part of the committee’s budget focuses on construction, there has been an increased focus on resiliency to protect military bases and other government assets.

The Inflation Reduction Act and the Bipartisan Infrastructure Law will allow agencies and their partners to improve coastal resilience, according to Kaine. The IRA dedicated $2.6 billion to the National Oceanic and Atmospheric Association to fund projects such as wetland restoration, building natural buffers and infrastructure improvements to combat sea level rise and the effects of climate change.

The concern for military mobilization is not the only factor at play. Climate refugees and mass migration can cause security issues.

Climate migration, not just between countries but inside, may eventually become the norm as people are forced from their homes because of flooding, drought or other natural disasters.

“It is not just civil unrest, but droughts and weather emergencies push people here and there,” Kaine said.

Congress is good at investing in emergencies after disasters, he said, but getting ahead of the issues needs to take a more prominent role. Kaine sees the IRA and Infrastructure law as being proactive.

What comes next is allocating the money responsibly. For example, Kaine said money allocated after Hurricane Sandy in 2012 is still being used in New York to improve infrastructure that has suffered damage. As of 2020, more than half of the funds are still available to be spent, according to the Federal Transit Administration in a 2021 report. Kaine said the money has been spent slowly, but wisely, because of careful planning.