Daniel Smith, Army veteran and one of the last children of enslaved Americans, dies at 90 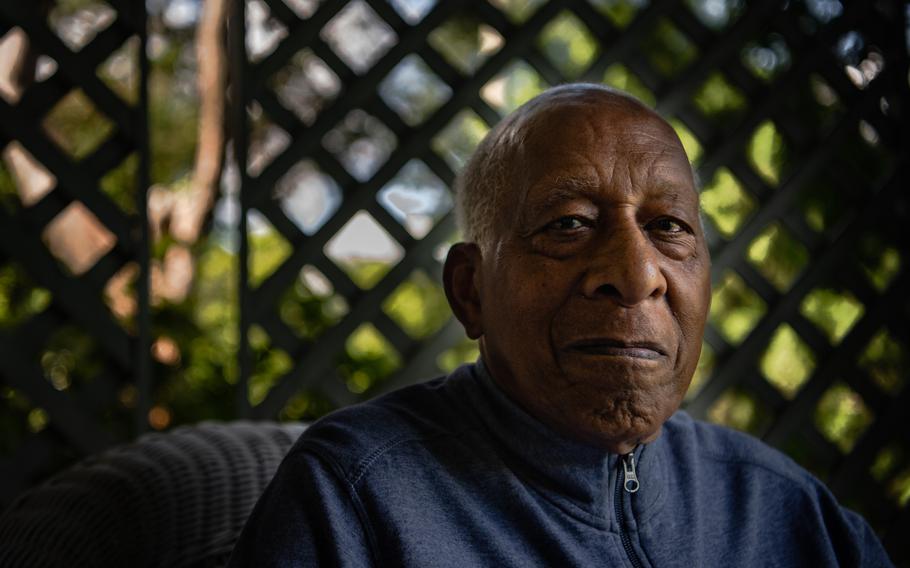 Daniel Smith at his home in Washington, D.C., in July 2020. Smith, who was 90 when he died Oct. 19, 2022, in Washington, was one of the last remaining children of enslaved Black Americans, and a rare direct link to slavery in the United States. (Salwan Georges/The Washington Post)

Growing up in the 1930s, Daniel R. Smith would listen to stories from his father, as young boys often do. He was not supposed to hear these stories — they were meant for his older siblings, not for a child as young as 5 or 6 — but after dinner on Saturday evenings he would sneak out of bed and listen to accounts of the “whipping and crying post,” of the lynching tree and the wagon wheel.

These were brutally vivid stories of bondage, for his father had been born into slavery in Virginia during the Civil War and had toiled as a child laborer before making his way north to Connecticut, where the Smiths were among the only African Americans in their town.

“I remember hearing about two slaves who were chained together at the wrist and tried to run away,” Mr. Smith recalled decades later. “They were found by some vicious dogs hiding under a tree, and hanged from it. I also remember a story about an enslaved man who was accused of lying to his owner. He was made to step out into the snow with his family and put his tongue on an icy wagon wheel until it stuck. When he tried to remove it, half his tongue came off.

“My father cried as he told us these things.”

Mr. Smith, who was 90 when he died Oct. 19 at a hospital in Washington, D.C., was one of the last remaining children of enslaved Black Americans, and a rare direct link to slavery in the United States. Born when his father was 70, he was part of a generation that dwindled and then all but disappeared, taking with them stories of bondage that were told firsthand by mothers and fathers who, after enduring brutal conditions on Southern plantations, sought to build a new, better life for their families.

Historians say it is impossible to know how many children of enslaved people are left. But while researching her book “Sugar of the Crop: My Journey to Find the Children of Slaves” (2009), author Sana Butler was able to track down about 40 who were still alive. All have since died. Mr. Smith was not featured in the book, although he later met Butler, who helped edit his forthcoming memoir, “Son of a Slave: A Black Man’s Journey in White America.”

His story was “a reminder that slavery was not that long ago,” Butler said. “You talk about the transatlantic slave trade, you talk about Reconstruction, and people really think that it’s history,” something that happened in the distant past and has little relevance today. “Mr. Smith,” she added, “is a reminder that it’s impossible to ‘get over it,’” to move past slavery and act as if it is no longer matters, “because it’s still [present] within these families’ lives.”

It was in part through his father — Abram “A.B.” Smith, who died in a car accident when Daniel Smith was 6 — that he developed a fierce pride and resilience that he carried into his work on civil rights, health care and education. “A lot of Black children grew up in a world where they didn’t know who they were and where they came from,” Mr. Smith told The Washington Post in 2020, “but we were A.B. Smith’s children, and that sustained us through anything.”

After a childhood in which he and his siblings were “poor as church mice,” Mr. Smith served as an Army medic during the Korean War, marched with the Rev. Martin Luther King Jr. in Washington, linked arms with fellow civil rights activists on the Edmund Pettus Bridge in Selma, and ran literacy and anti-poverty programs in rural Alabama, where he once outraced a carload of white supremacists on a dark country road, not stopping until he found shelter at a service station.

Mr. Smith later settled in the D.C. area, where in the 1970s he ran a federally funded program called the Area Health Education Centers, working to improve health care in underserved communities across the country. His work took him to apartheid-era South Africa, where he met Archbishop Desmond Tutu and, upon his return, said he was propositioned by a CIA officer who wanted him to spy on the African National Congress liberation movement. (Mr. Smith turned him down.)

Decades later, Mr. Smith was standing in the crowd, moved to tears, as Barack Obama was sworn in as America’s first Black president. He was privileged, he said, to be a part of so much history — “A friend of mine calls me the Black Forrest Gump,” he told the Economist last year — and for a time, at least, he thought little about his family’s own history and his legacy as one of the last surviving children of a man who was considered property rather than a person.

“Quite frankly, I’ve just grown up and been busy,” he told The Post. “And I’ve never thought much about it.”

The fifth of six children, Daniel Robert Smith was born in Winsted, Conn., on March 11, 1932. His father was a janitor at a clock factory. His mother, Clara (Wheeler) Smith, was 23 at the time. Little information was available about her life, but Mr. Smith said she was White, with Scotch-Irish and Cherokee ancestry.

After his father’s death, she became a housekeeper and raised Mr. Smith and his siblings with help from a trio of surrogate fathers, including a White veterinarian who gave him a job at his clinic, encouraging Mr. Smith’s lifelong love of animals. He was especially drawn to dogs — Dobermans in particular — and became a member of the county dog obedience training club, taking part in American Kennel Club competitions at New York’s Madison Square Garden, where he was one of only a few Black trainers, according to his memoir.

Although he had hoped to serve in the Army’s K-9 Corps, he was told it wasn’t taking Black soldiers, and instead he served as a medic, drawing on his veterinary training while working at a military hospital in Korea.

By 1955 he was back home in Winsted, where flooding killed nearly 100 people throughout Connecticut in the aftermath of Hurricane Diane. The death toll would have been higher were it not for Mr. Smith, who rescued a truck driver from the floodwaters, an act of heroism that was documented by Pulitzer Prize-winning reporter John Hersey, who was covering the storm for the New Yorker.

About two years later, Mr. Smith found himself in another life-or-death scenario while working at a YMCA camp near Winsted. During a trip to a reservoir where he had once gone swimming, he tried to help a young woman who had disappeared into the deep water and was pulled out by another swimmer. Mr. Smith found that she still had a pulse and began performing mouth-to-mouth resuscitation. Then a uniformed police officer began ordering him to stop, insisting that the woman was already dead.

It was immediately clear, Mr. Smith recalled, that the officer was wrong. She still had a pulse. Yet she was White; he was Black. “This remains the most racist incident I have ever experienced in my life,” he wrote in his memoir. “To this day, telling this story brings tears to my eyes. To think that someone would rather have anyone die rather than have her white lips touch my Black mouth. Incomprehensible.”

Mr. Smith graduated in 1960 from Springfield College in Massachusetts and was a psychiatric social worker before being accepted to veterinary school at the Tuskegee Institute in Alabama.

By 1963 he had turned from medicine to civil rights, deciding he could contribute more to people than animals. He led an antipoverty program in Lowndes County, just outside Montgomery. The church office he worked in was burned to the ground, and a local judge who helped him get phone service and electricity faced retribution from local residents, who poisoned 21 of his cows, according to an account by journalist Martin Dobrow.

Weeks before King was assassinated in 1968, Mr. Smith moved to the D.C. area, where he worked for federal agencies including the Health Resources and Services Administration and raised two children with his first wife, the former Sandra Hawkins. Together they bought a home in Bethesda, Md., that had a racially restrictive covenant — which was no longer being enforced — barring Black or Jewish ownership.

After he retired in 1994, Mr. Smith volunteered at Washington National Cathedral, where he escorted presidents including Bill Clinton and George W. Bush while serving as head usher. His first marriage ended in divorce, and in 2006 he married Loretta Neumann at the cathedral.

Mr. Smith, who lived in the Takoma section of D.C., was preceded in death by his five siblings. His death was confirmed by his wife, who said he had cancer and congestive heart failure. She survives him, in addition to two children from his first marriage, April Smith Motaung of Columbia, Md., and Daniel “Rob” Smith Jr. of New York; and a granddaughter. 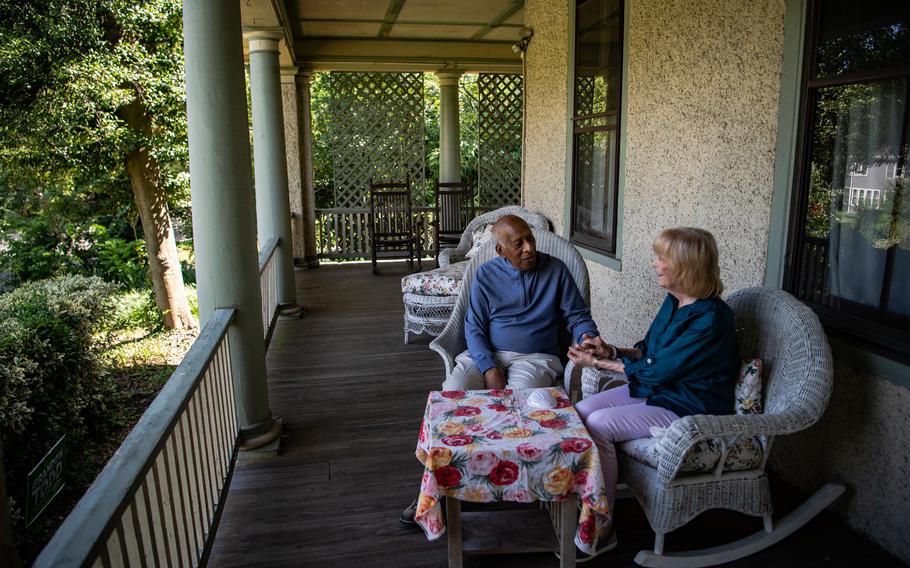 Daniel Smith and his wife, Loretta Neumann, at their home in Washington, D.C., in July 2020. Smith, who was 90 when he died Oct. 19, 2022, in Washington, was one of the last remaining children of enslaved Black Americans, and a rare direct link to slavery in the United States. (Salwan Georges/The Washington Post) 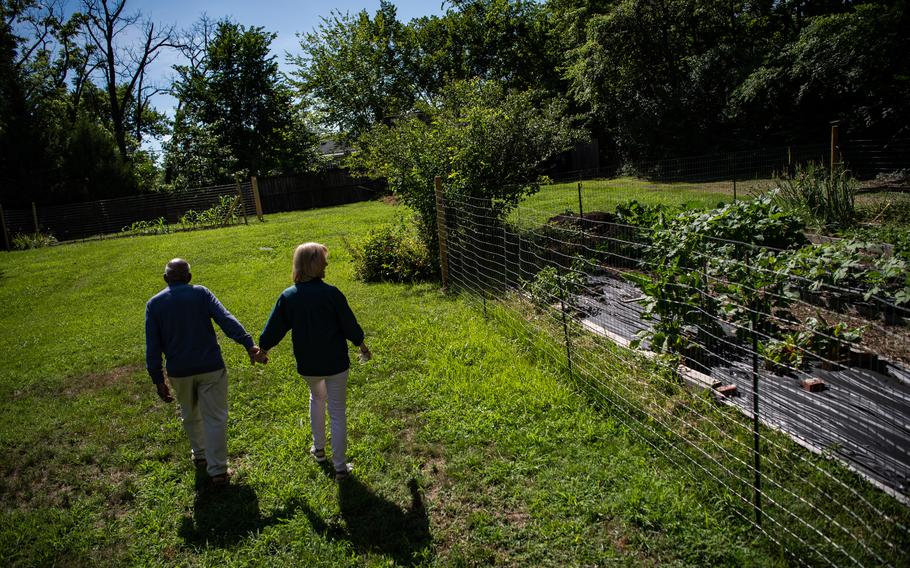 Daniel Smith, 88, and his wife, Loretta Neumann, walk past their vegetable garden in Washington, D.C., in July 2020. Smith, who was 90 when he died Oct. 19, 2022, in Washington, was one of the last remaining children of enslaved Black Americans, and a rare direct link to slavery in the United States. (Salwan Georges/The Washington Post)

Neumann said that she and Mr. Smith were finalizing his memoir while he was in the hospital and that she planned to self-publish it in the next two weeks through the D.C. bookstore Politics and Prose.

Mr. Smith told interviewers he thought the country had made great progress since he was a boy, although he had grown increasingly worried about the future during the Trump administration, especially after the Jan. 6, 2021, insurrection. He noted that his father, at least, would have maintained a positive outlook, despite all he had experienced as a child.

“We could never talk negatively about America in front of my father,” Mr. Smith told the Economist. “He did not have much but he really, really loved America. Isn’t that funny?”