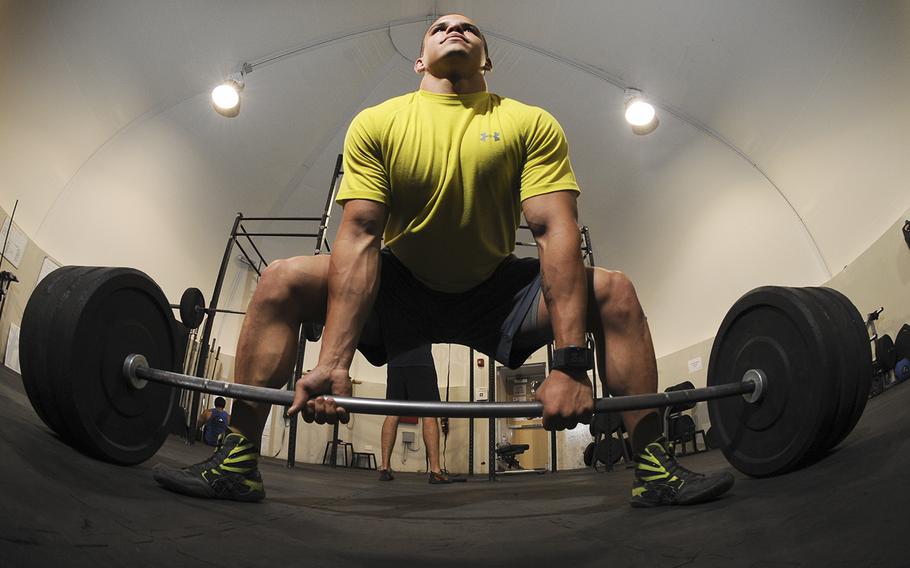 A U.S. airmen does a deadlift during a workout at an undisclosed location in Southwest Asia on Sept. 11,2013. (Joshua Garcia/U.S. Air Force)

A decade later, his athlete training software is being used by the United States military to help get troops in physical shape for battle.

To continue this military partnership — and expand the business into some other key areas — Dawidowicz announced Thursday that CoachMePlus had raised an additional $1 million from investors.

“Here we are with all these opportunities,” Dawidowicz said. “Being a small, scrappy, trying-to-figure-it-out kind of startup, we needed capital to go out again.”

CoachMePlus is a software system that helps coaches, trainers and other athletic officials track and manage data on how athletes are training.

The company was a 2015 43North startup contest winner, walking away with a $250,000 investment. It was part of the same cohort as ACV Auctions, Western New York’s first startup valued at more than $1 billion.

While CoachMePlus hasn’t exploded the same way ACV has, the company has grown steadily throughout the years, expanding to 15 employees and working with teams from every US professional sports league and some of the top collegiate athletic programs. Locally, the Buffalo Bills and Buffalo Sabres use the software, as does Niagara University.

What makes CoachMePlus different from similar platforms is it is fully customizable for whoever is using it, Dawidowicz said. How a professional football team uses the app is much different than how the military uses it with troops.

In addition to its partnership with the military, CoachMePlus is also working to expand into the fitness and gym and health and wellness markets.

Currently, CoachMePlus is running programs with the Navy, Air Force and Army.

The company started working with the Navy in 2017 to help recruits meet the required physical fitness standards to enlist. Recruiters are using CoachMePlus as a tool to virtually engage with future sailors and monitor their dietary and physical training habits. During the pilot program, no recruits failed because of physical fitness issues. The Navy is now expanding the program.

“On the one side, you’ve got your sailors tracking their activities,” Dawidowicz said. “And then on the other side, you’ve got your recruiters able to actually go in and help them with nutrition guidance, fitness programming and education materials that they’re typically just giving out. But now they’re doing it through the app, which has never happened before.”

“We learned a lot about the nutrition of future sailors and their dietary activities,” he added. “For instance, the first food that was tracked — they use a barcode scanner to track their meals — was a bag of Flamin’ Hot Cheetos.”

CoachMePlus started working with the Air Force in 2019 to do remote coaching and general health promotions for airmen. They expanded that pilot to work with Air Force National Guard members, as well.

In 2020, CoachMePlus was awarded a five-year, $1.4 million contract from the Army to adapt its software to help injured and sick soldiers return to duty or prepare for civilian life.

This year, the company was one of three selected to compete to become the Army’s system of record for all health and wellness activities. Nine thousand soldiers are testing the platform under realistic conditions for six months.

When CoachMePlus competed in 43North in 2015, they were pigeonholed as a sports company, Dawidowicz recalled.

But he always knew the company could do more than just work with elite athletes.

He wanted to see CoachMePlus move into the general health and wellness space, but the market wasn’t ready at the time, he said. However, the growing popularity of telemedicine and the overall shift to virtual technology due to the Covid-19 pandemic has opened people’s minds to virtual fitness coaching.

“It literally took six, seven years for the market to catch up to an idea that we had a long, long time ago,” Dawidowicz said. “Most companies don’t survive that. Being too early is often known as being wrong, and we waited it out long enough to actually be able to take advantage of it.”

The $1 million is going to help the company expand to the gym and fitness communities, as well as the health and wellness market. The company recently hired two marketing professionals to reach those markets, and CoachMePlus is in talks to work with one of the largest healthcare systems in the country.

There’s lots of fitness technology out there — Fitbits track your steps, Apple Watches tell you when its time to go to bed, Peloton streams live cycling workouts. But there is no one on the other side of that helping consumers understand what all that data means.

That’s where CoachMePlus comes in. The app helps facilitate the relationship between coach and athlete, recruiter and soldier, or trainer and client.