Party gatherings give a window into Biden’s mind, from nukes to Pelosi 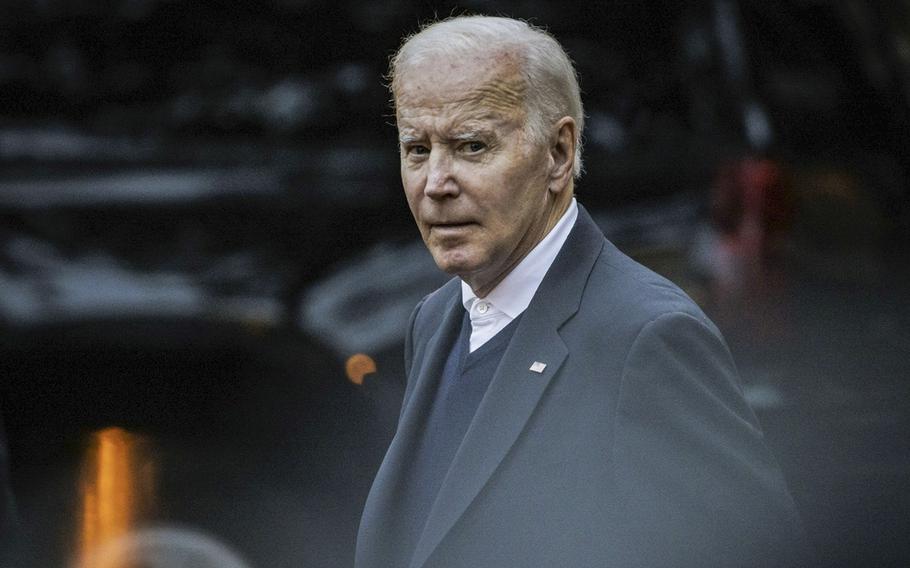 President Biden has a favorite line, one meant to show he knows that the combination of his voice and a microphone may get him into trouble. "No one ever doubts I mean what I say," he'll say. "The problem is I sometimes say all that I mean."

There are few venues in which he says all that he means more than at Democratic Party fundraisers, when the audience is friendly and his guard is down.

In just the past few weeks, Biden has told donors that Donald Trump and his followers are verging on "semi-fascism." He warned that Russian President Vladimir Putin's actions are risking nuclear "Armageddon." He derided the Supreme Court as an "advocacy group." He called Pakistan a highly dangerous country, and he suggested Italy is sliding into authoritarianism.

All these colorful remarks were delivered in the cozy confines of political fundraisers, where cameras are not allowed, but reporters with notebooks are. The events, whose frequency has accelerated sharply ahead of the midterm elections, provide the closest thing to unvarnished views from the commander in chief.

While Trump's Twitter feed provided near-hourly windows into the presidential id, Biden's comments are projected to the public less often, but just as revealingly, through the donor gatherings, among the few events where he does not use a teleprompter.

At a fundraiser Thursday in Brentwood, Calif., with more than 100 guests under a large white tent and small vases of zinnias sitting on cocktail tables, Biden veered into an unprompted discussion of technological changes that have fractured society and made discerning the truth all the more difficult.

"There are no editors anymore," he said. "The ability of newspapers to have much impact is de minimis."

Turning to Russia's invasion of Ukraine, he revealed that his staff calculated he had spent more than 225 hours in direct contact with allied leaders trying to hold the coalition together. He asked the crowd whether anyone would have thought, after the Cuban missile crisis, that a Russian leader would threaten to use nuclear weapons.

His musings then took him to Pakistan, which he called one of the most dangerous nations in the world because it has "nuclear weapons without any cohesion."

The nuclear threat, in fact, is increasingly on Biden's mind, and is therefore cropping up regularly at his fundraisers.

It was in the art-filled home of James Murdoch, son of Fox News mogul Rupert Murdoch, that Biden painted a picture of a world-ending battle of nuclear annihilation. (Despite his father's political leanings, James and his wife, Kathryn, a climate activist, have supported Biden.)

"We have not faced the prospect of Armageddon since Kennedy and the Cuban missile crisis," Biden said, adding, "I don't think there's any such thing as the ability to easily [use] a tactical nuclear weapon and not end up with Armageddon."

Some U.S. allies, including French President Emmanuel Macron, immediately suggested the comments were needlessly provocative, and the White House spent much of the next day trying to tamp down on the presidential warning.

Biden similarly caught his staff by surprise during a fundraiser in August when he launched into the anti-democratic forces he said Trump had unleashed. "It's not just Trump, it's the entire philosophy," Biden elaborated before pausing, perhaps considering whether he wanted to say what he wanted to say.

"I'm going to say something," he said. "It's like semi-fascism."

White House aides said later they were taken aback less by the sentiment - they knew it was how Biden felt - as by his decision to voice it in a quasi-public setting.

And a few weeks ago, speaking at a Democratic Governors Association fundraiser, Biden pointed to Italy as one example of global democracy under threat after voters there elected a far-right governing coalition.

"You just saw what's happened in Italy in that election. You're seeing what's happening around the world," he said, providing an assessment far blunter than his administration's official position. "And the reason I bother to say that is we can't be sanguine about what's happening here either."

Other politicians have also created trouble for themselves during fundraisers, lulled by a roomful of allies into speaking without their usual restraint.

During the 2008 campaign, Barack Obama was at a San Francisco fundraiser when he talked about how rural Americans have struggled, adding, "It's not surprising then they get bitter, they cling to guns or religion or antipathy toward people who aren't like them." The backlash was swift and severe.

Mitt Romney in 2012 seemed to dismiss nearly half the country, saying that 47 percent of voters would never pick him because they are too dependent on government assistance. "My job is not to worry about those people," he added curtly. The comments were seized upon by the Obama campaign to depict Romney as contemptuous of ordinary Americans.

Hillary Clinton in 2016 told the audience at a New York fundraiser that half of Trump's supporters fit into a "basket of deplorables." "The racist, sexist, homophobic, xenophobic, Islamophobic - you name it," she said to laughter in the crowd. The next day, she clarified that she was "grossly generalistic" and regretted putting the proportion at "half."

While Obama's and Romney's comments were recorded secretly, Biden knows his comments are being transcribed. But that rarely seems to prompt any notable caution.

Biden certainly is also capable of off-script comments outside of fundraisers. He commented that Putin "cannot remain in power" as an ad-libbed line at the end of a speech in Poland. He remarked that "the pandemic is over" during an interview with CBS's "60 Minutes." Both deviated clearly from the official line of his own White House.

And it was while addressing reporters outside Air Force One that Biden revealed that U.S. military leaders opposed House Speaker Nancy Pelosi's plans to visit Taiwan - a trip that had not even been confirmed yet, either by Pelosi's office or by the State Department.

But fundraisers are most often the venues where Biden reveals what's on the top of his mind.

In the opening months of his candidacy, he bragged at a New York fundraiser about working with segregationist senators. It was the same event where he assured donors that "rich people are just as patriotic as poor people" and "nothing would fundamentally change" for them if he was elected.

Both comments became headaches for his campaign, but arguably allowed him to showcase his identity as a moderate striving for bipartisanship.

When his campaign was trying to withhold the bad news of a paltry fundraising quarter, he blurted it out - at yet another fundraiser. At another donor event, he reveled that Cindy McCain was going to endorse him, and he provided regular updates on his vice-presidential selection process, including setting an Aug. 1 deadline (he announced Kamala D. Harris as his pick on Aug. 11).

In recent weeks, Biden's gatherings with Democratic donors have yielded real-time political prognostications, regardless of what others in the party are saying.

"I feel pretty good where we are as it relates to the Senate," he said last week. "But it's premature."

And on Thursday night, Biden concluded with an appeal that was uncharacteristically on message.