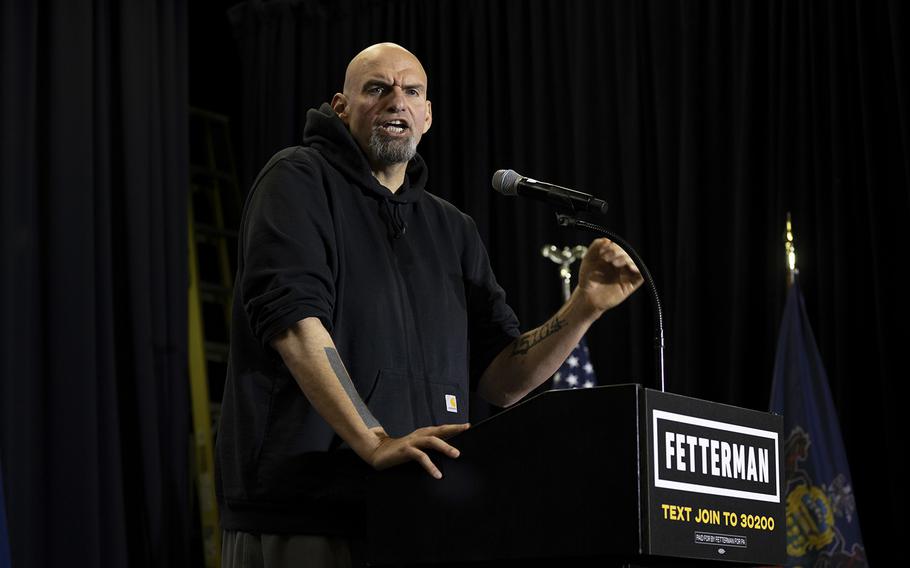 Pennsylvania Democratic Senate nominee John Fetterman, who suffered a stroke in May, is showing symptoms of "an auditory processing disorder which can come across as hearing difficulty," but he has no work restrictions, his primary care doctor said in a letter released by his campaign Wednesday.

The Oct. 15 note from Clifford Chen, a physician at the University of Pittsburgh Medical Center, says Fetterman, the lieutenant governor of Pennsylvania, had a follow-up visit on Oct. 14. "Occasional words he will 'miss' which seems like he doesn't hear the word but it is actually not processed properly," Chen writes.

Fetterman and his aides have often mentioned this condition. He has relied on closed-captioning in interviews with the press and will do so again during a debate next week against Republican nominee Mehmet Oz.

The Democratic nominee's "hearing of sound such as music is not affected. His communication is significantly improved compared to his first visit assisted by speech therapy, which he has attended on a regular basis since the stroke," writes Chen. Fetterman has acknowledged that he sometimes stumbles over his words.

The letter marks the most detailed information Fetterman's campaign has provided from a doctor since an early June letter explaining that surgery conducted 17 days earlier to install a defibrillator was to treat a previously undisclosed diagnosis of cardiomyopathy, and not for atrial fibrillation as the campaign originally claimed.

Chen writes that Fetterman's vital signs, such blood pressure, heart rate and pulse oximetry, were normal. All of his bloodwork, including cholesterol and liver function, were also normal, Chen writes. Fetterman has no strength or coordination difficulties or cognitive impairments. His remaining issue, Chen writes, is auditory processing.

Oz has attacked Fetterman for not releasing more detailed medical records or making his doctors available for interviews with the press.

Chen writes that he's consulted with Fetterman's neurologist and cardiologist. Fetterman takes "appropriate medications to optimize his heart condition and prevent future strokes." Fetterman is "well and shows strong commitment to maintaining good fitness and health practices. He has no work restrictions and can work full duty in public office," Chen writes.

Fetterman won the Democratic nomination days after his May stroke without fully disclosing the extent of his physical condition. He revealed more than two weeks later that he had been diagnosed in 2017 with cardiomyopathy that decreased the amount of blood his heart could pump and had failed to take his medications and follow up with a doctor.

Oz has released three letters written by his doctor from this year and recent years that describe his health as "excellent."