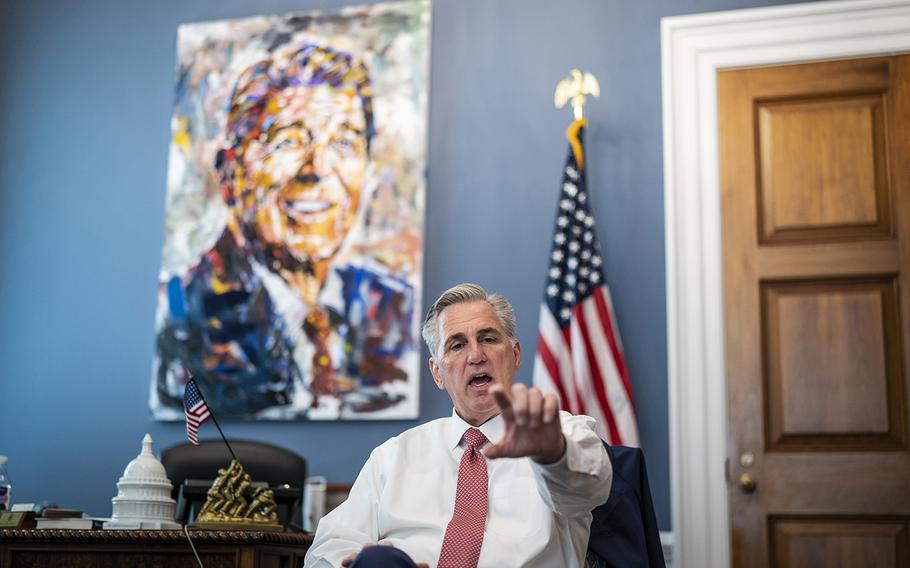 House Minority Leader Kevin McCarthy is downplaying the prospect of impeaching President Biden if Republicans take control of the House next year, throwing cold water on the efforts of some in the GOP who have been clamoring to impeach the president and others in the Biden administration.

"I think the country doesn't like impeachment used for political purposes at all," McCarthy (R-Calif.) told Punchbowl News in an interview published Wednesday. "If anyone ever rises to that occasion, you have to, but I think the country wants to heal and . . . start to see the system that actually works."

Asked whether anyone in the Biden administration has risen to a level that would prompt him to consider impeachment proceedings, McCarthy told Punchbowl, "I don't see it before me right now."

"You watch what the Democrats did," he added. "They all came out and said they would impeach before Trump was ever sworn in. There wasn't a purpose for it. If you spent all that time arguing against using impeachment for political purposes, you gotta be able to sustain exactly what you said."

In fact, while a handful of Democrats called for impeaching Donald Trump after the 2016 election, the leadership, most notably House Speaker Nancy Pelosi (D-Calif.), did not endorse such a step until late in 2019 after Trump held up aid to Ukraine unless it investigated the Bidens.

Those efforts have been anemic, however, and are unlikely to gain momentum without the support of the GOP House leader. Of the nine impeachment resolutions introduced against Biden since he took office, none have more than seven co-sponsors, and three have zero.

Rep. Marjorie Taylor Greene (R-Ga.) has introduced five of those articles of impeachment against Biden, including for "dereliction of duty in Afghanistan," for "causing a national security crisis on our Southern border" and for his administration's extension of the eviction moratorium during the coronavirus pandemic. None of Greene's moves to impeach Biden have advanced.

Still, the issue has come up in midterm campaigns, particularly for GOP candidates who align themselves with Trump and say the two impeachment trials against the former president as lacked merit. Trump was impeached twice by the House - once in 2019 on charges that he abused his office and obstructed Congress in his actions with Ukraine and a second time in 2021 over accusations that he incited the insurrection at the U.S. Capitol on Jan. 6 of that year.

Both times Trump was acquitted by the Senate, and both trials sparked talk of political retribution from Republican lawmakers.

"I believe there's a lot of pressure on Republicans to have that vote, to put that legislation forward and to have that vote," Rep. Nancy Mace (R-S.C.) said on NBC's "Meet the Press" last month. "I think that is something that some folks are considering."

In January, Sen. Ted Cruz (R-Tex.) said on his podcast that he thought Republicans would impeach Biden "whether it's justified or not."

"That's not how impeachment is meant to work, but I think the Democrats crossed that line," Cruz said. "I think there'll be enormous pressure on a Republican House to begin impeachment proceedings."

Efforts to impeach senior Biden administration officials have gained slightly more support from GOP lawmakers: A resolution targeting Mayorkas, over alleged mismanagement of the U.S.-Mexico border, has 31 co-sponsors. Another aimed at Blinken, over his role in the U.S. withdrawal from Afghanistan, has 14 co-sponsors.

According to an analysis by Axios, Republicans have introduced impeachment resolutions against Biden and his administration at a far faster pace than Democrats did during Trump's term in office.

The Washington Post's Olivier Knox and Caroline Anders contributed to this report.