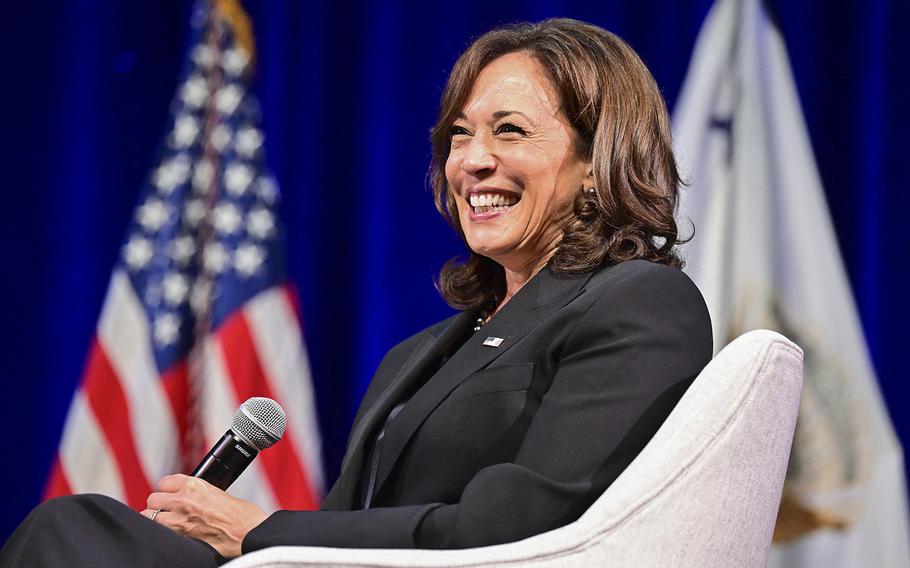 SAN FRANCISCO (Tribune News Service) — After a summer of national and global climate devastation, Vice President Kamala Harris made a stop at the Cowell Theater on Tuesday to tout Democrats' progress on climate policy just weeks before the midterm elections.

During a wide-ranging conversation with podcasters Leah Stokes and Katharine Wilkinson for their show, "A Matter of Degrees," Harris spoke about her Bay Area roots, the Inflation Reduction Act and environmental justice — including how women, low-income communities and communities of color often bear the brunt of harmful policies.

In one pointed moment, Harris noted a "Venn diagram" connection between states that have poor climate track records and those that are seeking to limit voting rights, reproductive healthcare and LGBTQ rights.

"You would not be surprised to know that there was a significant overlap" between those states, Harris said. "When you then lay on which states are also attacking or obstructing smart climate policy, you will see a really interesting picture."

The conversation followed months of extreme weather events exacerbated by human-caused climate change, including deadly heat waves, hurricanes and floods, severe drought and a looming crisis on the Colorado River.

It also came a few weeks ahead of COP27, the United Nations Climate Change Conference, which will be held in November in Sharm El-Sheikh, Egypt. Last year's conference in Glasgow, Scotland, saw some victories, but also received criticism for hosting a large fossil fuel industry delegation and presenting pledges that some experts said were too soft amid the worsening climate crisis.

But Harris emphasized that the Inflation Reduction Act includes several concrete goals and provisions, including investments aimed at modernizing the American energy system and reducing energy costs through tax credits, rebates and financial incentives for manufacturers and users of electric cars, rooftop solar panels and wind turbines. Officials say its $369 billion in climate and energy funding will help put the U.S. on track to slash greenhouse gas emissions to 40% of 2005 levels by 2030.

"We must understand that we are in a very specific moment in time, and this window is going to shut on us if we don't act with a sense of urgency," Harris said. She also said she has "a great sense of optimism that we do feel the urgency, and fortunately we have, as an administration, been able to do things like the Inflation Reduction Act."

Tyrone Mullins, who runs an integrated waste management business in San Francisco, was among those in attendance. He said stances on the climate crisis are a major factor in the upcoming elections.

"It's a part of like everyday life," said Mullins, 37. "So what are we doing around that? What's our approach? What are we coming up with?"

For her part, Harris said she was particularly excited about electric vehicles, including electric school buses.

"A lot of it has to do with a real intentionality that we have to reshift industries, and to do that in a way that we are emphasizing the importance of U.S investment in U.S.-based R&D, research and development," Harris said. She said U.S.-based manufacturing will not only help address some of the supply chain issues that came to light during the COVID-19 pandemic, but also aid in the country's evolution toward clean industries.

"We see a benefit to investing here in production, understanding and believing that our standards are closer to where we should be as a globe, in terms of manufacturing," she said.

The vice president also acknowledged challenges at home, including policies that continue to leave the most vulnerable at risk. She emphasized the intersectionality of the economy, public health and environmental justice, noting that 70% of the people who live in the poorest air quality regions of the country are people of color and poor people.

It was a message that likely resonated with many members of the crowd, including Leah Kalish, manager of youth engagement at the California Academy of Sciences. Before the event started, Kalish said she was optimistic that the Inflation Reduction Act would soon start to make a difference.

"I'm excited to start seeing those changes … and positive impacts to our climate and our communities, especially our disenfranchised and underserved communities," said Kalish, 45. She added that climate change is "100% a factor" in her vote in the upcoming elections, and that it plays a huge role in the lives of the young people she works with.

"The climate crisis is here. It's very serious. And not just for my generation, but the generation of youth that I serve. It is affecting them every day, and it will continue to affect them for the rest of their lives," she said.

For its part, California has set several of its own climate goals that, in some cases, surpass those of the nation, including the state's aim to slash greenhouse gas emissions to 40% of 1990 levels by 2030.

The state in August also announced that it will ban the sale of new gas-powered cars by 2035 in a move air quality officials say will lead to significant emissions reductions. (Transportation accounts for up to half of California's greenhouse gas emissions, according to the state's Energy Commission.)

But the Inflation Reduction Act also includes programs that will resonate with Californians, including a $5-billion investment in forest management and wildfire risk reduction. The state's wildfires in recent years have grown more frequent and more devastating under the state's warmer, drier climate regime, and experts say forest management plays an important role in mitigating the destruction. But with more than half of California's forests under federal ownership, collaboration between state and federal agencies is essential.

Harris, who is from the Bay Area and served as the district attorney of San Francisco before becoming the state's attorney general, emphasized California's strength as a climate leader. But she also underscored how the nation as a whole has a responsibility when it comes to global issues, especially when compared with areas such as the Caribbean, which are low greenhouse gas emitters but pay a high price in the form of extreme weather events and the loss of tourism because of climate change.

"What is our responsibility globally as well as domestically, and also, how are we, as a world community, going to ensure that we are sharing resources in a way that the collective benefits?" she said.

"We need to continue to be leaders on climate action," Huffman said. "We still need big, bold actions to keep pace with the changing climate."

"For decades California has set the gold standard" on climate action, Kounalakis said. "Policies we establish here ripple out across our nation and the globe."

Despite the optimism, some Californians in the audience maintained a bit of skepticism. Mullins, the attendee who runs the waste management business, said "it's too early to tell" if the Biden-Harris administration has been strong on climate.

"Give them time to figure things out, and then we'll come back at the end and we'll give them a grade then," he said.

Mullins intends to vote for Biden-Harris in 2024.