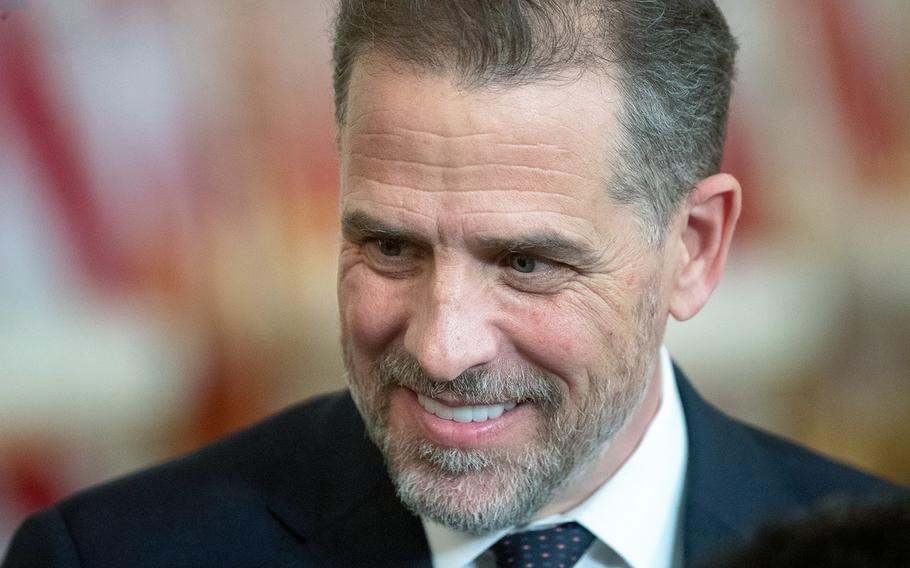 "Hunter Biden's committed serious crimes, as you mentioned, 150 suspicious activity reports. Those are the most severe bank violations. This is when the bank notifies the federal government that we're pretty confident our client has committed a crime. He's had multiple banks file 150 suspicious activity reports, saying that we believe each instance was another act of a crime. But yet the FBI did nothing about it."

If the Republicans win the House in the November elections, Rep. James Comer, R-Ky., is on track to be chair of the House Oversight Committee.

In a Fox News interview, Comer signaled that the business dealings of President Biden's son Hunter and brother James with such countries as China, Russia and Ukraine will be the subject of intense scrutiny in a GOP-led Congress.

"It's clear the FBI needs to be held accountable. Congress must begin considering meaningful reforms," Comer tweeted with a clip of his interview. "For too long, the Biden family has peddled access to the highest levels of government and the FBI has been slow to act."

As part of the government's effort to combat money laundering and terrorist activity, financial institutions are required to file suspicious activity reports, or SARs, to the Financial Crimes Enforcement Network (FinCEN), an arm of the Treasury Department. A SAR is supposed to be triggered by a minimum amount of a transfer (generally at least $5,000, or $2,000 for money services businesses) and a suspicion the transfer involved funds derived from an illegal activity.

The Treasury also requires all cash transfers that exceed $10,000 to be separately reported. A SAR can also result from cash transfers that appear structured to avoid triggering such a report, such as repeated payments to the same person or entity of $9,500.

After the Sept. 11, 2001, attacks, banks significantly stepped up SARs reporting after it was learned that the terrorists had funded their attacks using the U.S. financial system but that no SARs were filed on their transactions. The Patriot Act, passed after the attacks, had added new reporting requirements.

As a result, FinCEN expects to receive nearly 3.7 million SARs in fiscal 2023, according to a Treasury report submitted to Congress.

Under Comer's logic, that would suggest banks will report 3.7 million crimes. But that's not correct.

"A financial institution only had to say 'something doesn't look right about this' using the FinCEN guidance," said James E. Johnson, Treasury undersecretary for enforcement in the late 1990s who oversaw FinCEN. "That is well short of, 'I think a crime has been committed.' "

Another former Treasury official, who spoke on the condition of anonymity because of the political nature of Comer's comments, described SARs reports as merely "a tip." He noted that the threshold for filing a SAR is not especially high and that many banks file the reports just to be on the safe side. "There is an incentive that, when in doubt, to file a report," he said.

The Bank Policy Institute (BPI), an advocacy group for large banks, says banks receive computer-generated alerts about possibly suspicious transactions and then a compliance officer decides whether to file a SAR. "Since banks are subject to enforcement action if they fail to file a SAR when they should have, but suffer no sanction if they file a useless SAR, the general presumption is to file the SAR," the group says.

A filing of a SAR by itself does not necessarily trigger an investigation. Each SAR is deposited in a massive database that law enforcement agents may access later when investigating a person or an entity, providing further leads for inquiry.

For instance, a New York bank had filed a SAR after New York Gov. Eliot Spitzer (D), in 2007, allegedly wired more than $10,000 from a Manhattan bank account but sought to break up the payment in an apparent effort to avoid triggering a currency transaction report. But that report was unnoticed until another bank later filed a report about two shell companies that had collected hundreds of thousands of dollars without an apparent source of revenue. That investigation eventually led Internal Revenue Service agents to discover the SAR previously filed on Spitzer, according to the New York Times. Spitzer resigned after investigators linked his wire transfers to a company that connected high-end sex workers with wealthy clients.

In a 2018 report, BPI said a survey found that only about 4 percent of SARs that were filed in 2017 led to a law enforcement inquiry - an estimate that the former Treasury official said sounded accurate. "A tiny subset of these results in an arrest and ultimately a conviction," the group says. If a bank concludes a SAR reflects actual criminal behavior, as opposed to suspicion, "someone at the bank will call law enforcement directly to flag the SAR."

A filing of a SAR, then, does not mean a bank believes a client has committed a crime, as Comer claimed. In fact, Comer should well know this. He has posted on the committee's minority website a Sept. 2 letter from a Treasury official that plainly states that SARs are "preliminary and unverified tip-and-lead information on possible violations of law."

Jessica Collins, communications director for the minority staff of the House Oversight Committee, when asked about this, noted that "Hunter and James Biden have racked up at least 150 suspicious activity reports for their business transactions," she said. "SARs are used to identify possible illegal activity like money laundering or tax evasion. The sheer number of flagged transactions in this case is highly unusual and may be indicative of serious criminal activity or a national security threat."

Comer often speaks of 150 SARs filings as an established fact. Collins said the source of the figure was a CBS report in April that said: "150 financial transactions involving either Hunter or James Biden's global business affairs were flagged as concerning by U.S. banks for further review." But that same report noted that "such banking reviews could point to deeper problems - or they could prove innocuous."

In a July letter to a financial adviser to Hunter Biden, Comer suggested a text exchange found on a hard-drive copy of the laptop Hunter Biden supposedly left behind for repair in a Delaware shop in April 2019 indicated that the president's son "was aware of these SARs and took steps to avoid detection in his financial dealings." Experts working with The Washington Post have verified thousands of emails contained on the hard drive but not text messages.

A lawyer for Hunter Biden declined to comment. A representative for James Biden said: "We have no information regarding SARs allegedly filed about James Biden."

In the statement, Collins also said the Biden administration has sought to restrict congressional access to SARs.

"Under the Biden administration, the Treasury Department has changed long-standing policy to restrict Congress's access to these reports," she said. "We need access to these reports to determine whether the Biden family's business schemes threaten national security or have compromised President Biden. Instead of defending Hunter Biden's SARs, it would be better to investigate why Biden's Treasury Department is trying to hide them."

Her complaint has bipartisan support. In July, by a vote of 349-70, the House passed a bill sponsored by Rep. Maxine Waters (D-Calif.) that would require Treasury to provide SARs to a congressional committee or subcommittee within 30 days. Waters said in a report that the action was needed because Treasury had imposed requirements that hampered congressional investigations, such as "requiring congressional staff to review all material in a reading room at Treasury, prohibiting the copying of materials for purposes of highlighting, ongoing reference, or margin notation, and restricting information collection to note taking." Action is still pending in the Senate.

Whether Treasury's new rules are related to Hunter Biden is unproven. The Trump administration also was accused of slow-rolling congressional requests for information on SARs and argued, in a legal opinion, for limiting congressional access. The Trump Treasury Department, however, provided SARs related to Hunter Biden to Republican Senate probers, who relied on the raw data to make allegations about his business practices.

Treasury spokesman Mike Gwin rejected Collins's statement. "Treasury provides SARs to Congress in a manner that enables robust oversight and that is consistent with how other sensitive law enforcement information is often produced," he said. "It is not a political process. Since the beginning of this administration, Treasury has made SARs available in response to authorized committee requests and continues to engage on the process with any individual members seeking information."