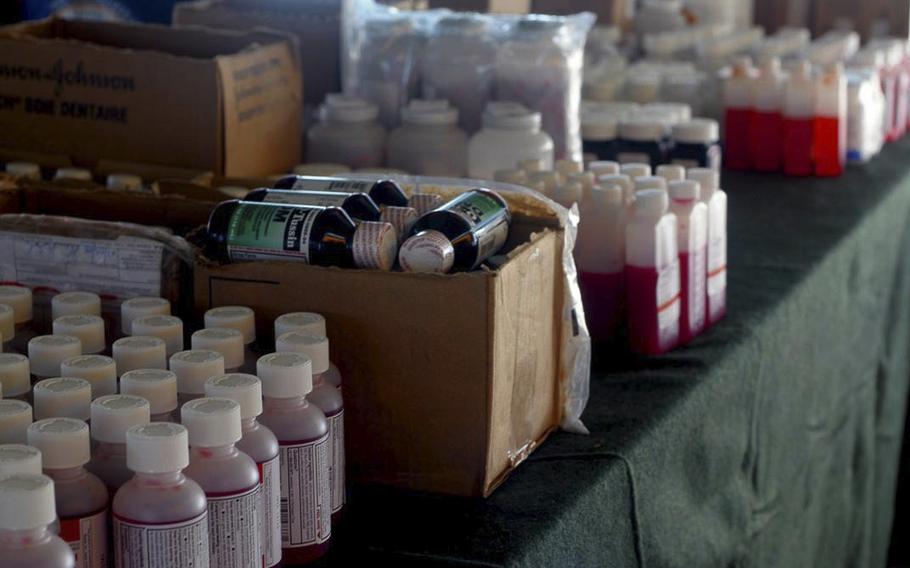 Medicines and first aid treatment supplies line the table of a temporary pharmacy set-up at a school in Malaysia on July 10,2018, during a military exercise. (Eric J. Chandler/U.S. Coast Guard)

(Tribune News Service) — For years, a Georgia pharmacy ran a lucrative scheme, government prosecutors alleged. It skirted federal restrictions on the sale of compounded pain creams to members of the U.S. military’s health system, making millions of dollars in profits.

Prosecutors said the drugs were compounded in mass quantities and peddled by sales agents equipped with pre-printed prescription pads. To boost sales, the government alleged, the company used a fake charity and other ruses to waive required co-pays, then billed the government at exorbitant rates. At times, a product sold to cash-paying patients for $30 was billed to the government at more than $600.

Now, that company, DermaTran Health Solutions, an insurance company and others accused of defrauding the government will pay more than $6.8 million to settle the civil case, without admitting liability. A whistleblower who brought the case to the government’s attention will receive about $1.4 million of that amount.

The scheme goes back to 2012, when DermaTran opened in Rome for the purpose of making and selling custom compound pain creams, court documents say.

At the same time, the government says, another company, Pharmacy Insurance Administrators (PIA), was ostensibly created to handle the billing, though in practice it allegedly operated as a call center for DermaTran to help patients to fill and refill their prescriptions. When various auditors began to catch on to the problems and terminate DermaTran from its networks, the company began selling its out-of-network prescriptions to pharmacies in Texas and Alabama that were in-network.

Court documents show that State Mutual Insurance Company, which has its headquarters in Rome and does business in more than 40 states, played a role in the scheme. Its related businesses, PIA, Gulfcoast Administrators and Insurance Administrative Solutions, are among the defendants. Individuals accused in the lawsuit include Delos H. Yancey III, who is chairman and president of State Mutual; Sam R. Moss of Rome; and Robert Gussenhoven of Alabama.

No one immediately responded to an Atlanta Journal-Constitution request for comment from Yancey or State Mutual Insurance. The AJC could not reach Moss or Gussenhoven for comment.

A former accountant for DermaTran blew the whistle, filing a lawsuit in 2017 under the federal False Claims Act and bringing the case to the government’s attention.

“The FBI will not stand by when there are allegations of companies operating corporate wide schemes to illegally line their pockets,” said Keri Farley special agent in charge of FBI Atlanta. The case was prosecuted by the U.S. Attorney’s Office in Atlanta, with investigative help from inspector generals at the U.S. Postal Service, the Office of Personnel Management and the Department of Health and Human Services.

Under the settlement, PIA will pay $6.5 million of the $6.8 million. The Texas and Alabama pharmacies or their owners will contribute much of the rest. DermaTran is no longer operating and was sold last year for $40,000, with the proceeds turned over the government as part of the settlement.