Most Floridians got power back quickly after Ian. But for some the wait has just begun. 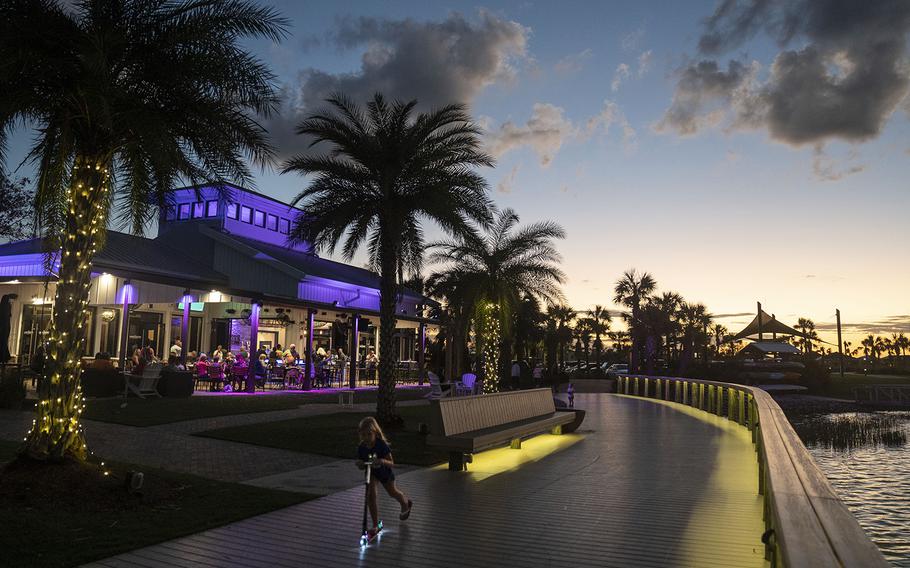 Lights illuminate Babcock Ranch’s town center at dusk. Power was back in much of Southwest Florida less than a week after Hurricane Ian made landfall. (Michael Robinson Chavez/Washington Post)

FORT MYERS BEACH, Fla. - If any electrical grid could ever be hurricane-proof, it would probably be here in the Sunshine State.

The state's utility companies have invested billions to strengthen the electrical grid in recent years, hoping to avoid a prolonged mass blackout after a catastrophic tropical cyclone. When Hurricane Ian hit southwest Florida in late September, a 44,000-strong army of electrical workers from all over the country stood on standby for repairs.

Florida's electrical companies say those efforts paid off: Two weeks after the storm, Lee County Electric Cooperative and Florida Power &amp; Light report that only a few thousand customers remain without power. But in the hardest-hit parts of Southwest Florida, the damage is so severe that key distribution lines will need to be reconstructed.

At Ian's ground zero - places like Fort Myers Beach and Sanibel - it may be weeks, perhaps even months until the lights come back on. While many have sought refuge elsewhere as the islands are rebuilt, some vulnerable, elderly residents refuse to leave - meaning they are living without consistent access to lighting, refrigeration and, in some cases, even water.

Pat Pickett, 83, and her husband, Leslie, 84, stayed in their mobile home on San Carlos Island as the hurricane tore through, bringing a storm surge that reached their chests. Their mobile home is now severely damaged and filled with debris, but they don't want to leave.

The couple met when both were in high school in Indiana, and they have been married for 63 years, working together in the Air Force. About 20 years ago, they settled on San Carlos Island, a place that is far less affluent than nearby barrier islands and just as vulnerable to storms. Now Pat worries that leaving could aggravate Leslie's dementia.

At night their home is illuminated by candles and a small silver flashlight. They are thankful to have running water, though without electricity it is too cold to shower with.

"It gets very dark here," Pat Pickett said as she sipped a lukewarm beer and the sun began to dip in the late afternoon.

That the power is on anywhere in Southwest Florida is no minor feat.

Hurricane Ian's 150 mph winds and 18-foot storm surge in some parts of Florida lifted homes from their foundations and turned streets into rivers. Meteorologists say it is tied for the fifth strongest storm to make landfall in the United States.

Ian was the deadliest hurricane to hit Florida since 1935, with more than 100 deaths, according to an official state tally. Most of the victims drowned, but some fatalities were a direct result of the blackout. Several elderly men died after the oxygen pumps they relied on failed when the power went out. 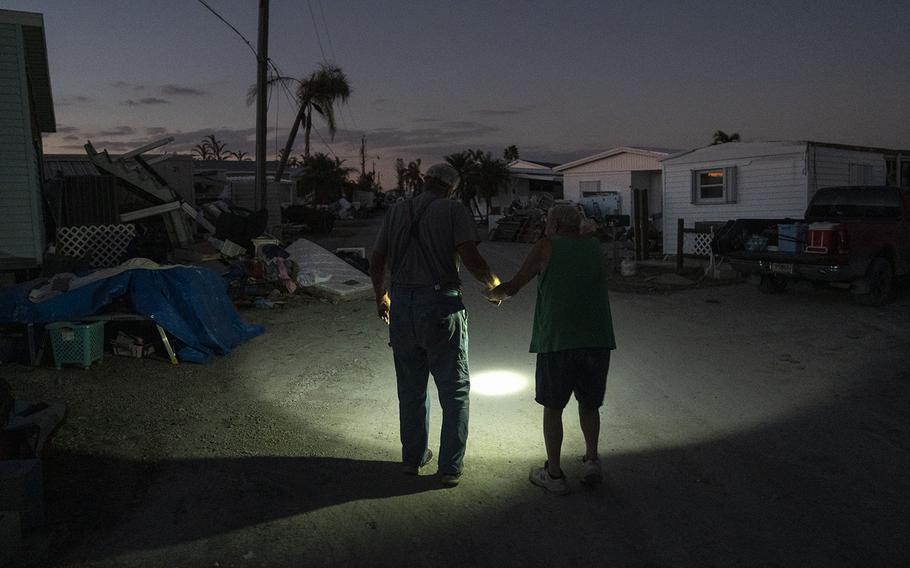 In recent decades, Florida has experienced widespread blackouts after several significant storms. Between 2004 and 2005, the state was walloped by five major hurricanes, including Charley, which cut a similar path through Florida as Ian. A year later, Wilma devastated the state, again leaving hundreds of thousands in the dark.

Florida Power &amp; Light, the state's largest provider, was accused of skimping on maintenance, putting residents at risk during storms.

Ted Kury, director of energy studies at the University of Florida's Warrington College of Business, said the Florida Public Service Commission forced utility companies to sit down and take resilience more seriously. Annual storm-preparedness briefings were put in place so that companies could share what they learned.

Several measures were adopted. Some wooden transmission poles were replaced with concrete ones less likely to snap in high winds. Trees and vegetation were trimmed if too close to power lines. Some lines were put underground to avoid being toppled, while some power plants and other critical infrastructure were put behind high walls to prevent flooding.

More than 2.1 million customers lost power during Ian - similar to the amount after other major storms - but Eric Silagy, chief executive of Florida Power &amp; Light, noted that all customers in places where the grid doesn't need to be rebuilt got back online within eight days. Roughly two-thirds of customers were online within 24 hours.

Though a full analysis is still ongoing, Bryan Garner, director of communications for Florida Power &amp; Light, said the company had looked at all Category 4 and 5 storms that made landfall in the United States since the 1950s and couldn't find any other example where most power had been restored in eight days or less to areas in the direct path of the storm.

Some outside experts agreed with the praise. "Fewer people lost power than I would have expected, given the physical size and ferocity of the storm," said Michael Webber, an energy scholar at the University of Texas at Austin.

The electricity sector's mutual aid agreements, meanwhile, allowed providers to put out calls for workers from all over the country - similar to calls put out by fire departments and other emergency responders during crises.

In Cape Coral over the past weekend, hundreds of electrical workers descended on residential neighborhoods, getting hoisted up in cherry pickers to replace broken distribution poles and reconnect wires. Though many were from Southwest Florida and had been affected themselves, others had traveled long distances.

"I can't help you ma'am, I'm from Maine," said one line worker when a local resident inquired about an alternative route.

In Port Charlotte, another hard-hit area north of Fort Myers and Cape Coral, electrical workers trying to reconnect a local elementary school to the grid early Friday morning were welcomed with a cooler full of drinks - including several Coronas. (An FPL employee at the site said they gave the beers to another resident.)

For now, workers are focused on restoring as much power as they can. But eventually, once the immediate crisis is gone, there will be discussions about how to improve the grid again - in particular, how to make it more resilient against storm surges that are higher than expected. With all the measures taken before Ian, even in hard areas like Fort Myers Beach, most of the poles for distribution lines are still standing.

However, the water rose so high that even when the lines are intact, there is nothing safe to connect it to after salt water got into every nook and cranny. 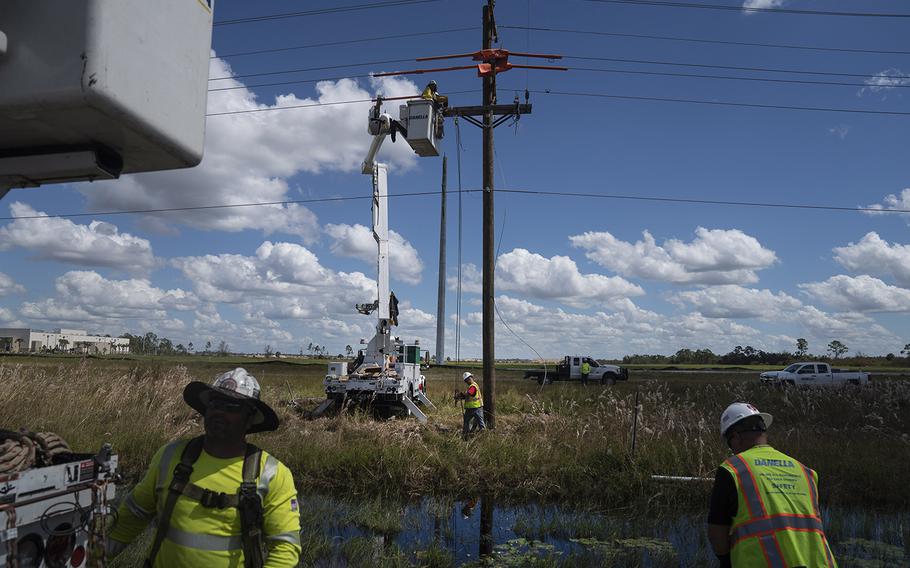 "Unfortunately it took this happening to Florida Power and Light and Lee County Electric Cooperative for us to learn it," Kury said.

With climate change leading to unpredictable weather around the world, Florida's efforts to reinforce its electrical grid have been watched closely.

"This is something that is of broad importance for utilities that are far beyond Florida," Kury said, adding that the Philippines is setting up storm hardening meetings partly modeled on those that began in Florida 15 years ago.

But for those facing weeks in the dark, frustration is mounting. Residents in hard-hit areas say they are growing desperate for air-conditioning and refrigeration to keep food from spoiling. For remote workers, no power means many are unable to work. In many areas, water systems rely on electricity.

In the blazing heat of the midday sun in Cape Coral, 10 miles north of San Carlos Island, tempers flared at a Verizon store that had set up a trailer for residents to charge their devices.

Ellen Richards, 62, said that she could see electrical crews working with her provider, Lee County Electric Cooperative, but that she was still without power more than a week after the storm. One crew of line workers near her house, in town from New York, told her they were still waiting for equipment.

"The guys that are assigned to our neighborhood are just sitting there," said Richards, who works as a project manager for a financial payment company, which she said had required her to use her paid time off because she could not work without power or internet service.

Industry experts doubt that Florida's electrical grid will ever be fully hurricane-proof. Underground power lines may escape high winds but they are vulnerable to flooding. Storm surges as high as the ones that hit Fort Myers Beach damage the electrical systems in homes too, with salt water corroding wiring and making houses unsafe for electricity. FPL's Silagy said that ultimately his aim was "to have pockets, rather than wide destruction, depending on mother nature."

"There is no such thing as a hurricane-proof grid," he said.

More than a week after Hurricane Ian hit land, life in those pockets was marching on - just without power. Locals have taken to gathering outside Hurricane Tina's Five Star Dive Bar in San Carlos Island that one recent day gave out free beer to frazzled residents.

On Saturday, Tina Tomasino, the bar's owner, also handed out free ice. Pizza cooked on a wood-fired oven brought down from North Carolina by a former Fort Myers Beach resident. Televisions showed college football games, and a local bar band played "My Sharona" by the Knack.

Behind it all, the hum of a half dozen portable generators.

No one knew when electricity would return to the island. For now, Pat and Leslie Pickett are surviving with a flashlight and a cooler with water, beer and sandwiches provided by local aid groups. They had water too, thanks to a local pump that served their trailer park.

It was tough, but they had endured far worse when the storm surge reached their trailer.

"The wind was mad and the water was a raging idiot," Pat said, with a touch of anger in her voice.

Few others believe they can live on the island for long in its current state. Charlie Whitehead, a neighbor who offered the Picketts a tent to sleep in, gave them his head lamp on Friday as they insisted on staying yet another night in the dark.

For their helpful neighbor, electricity is just the start of his troubles. Whitehead's home was destroyed by the storm.

"People have offered me generators," he said, "but what would I plug in?"