Smithsonian gives back 29 Benin bronzes to Nigeria: ‘We are not owners’ 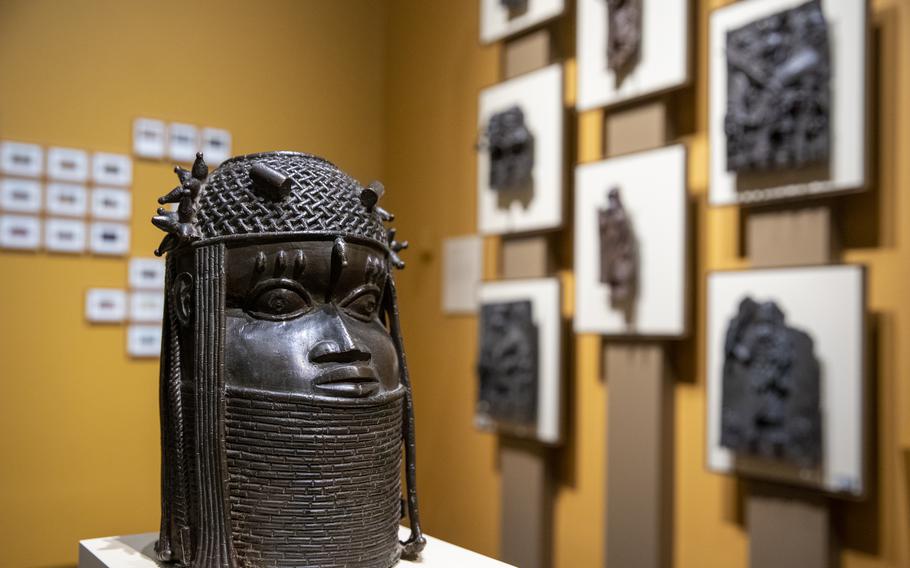 One of the Benin Bronzes at the National Museum of African Art in Washington, D.C. on October 11, 2022. (Amanda Andrade-Rhoades/The Washington Post)

Several Benin bronzes that have been in Washington museums for decades are finally headed home to Nigeria — 125 years after British troops plundered them from present-day Nigeria, 62 years after Nigerian independence brought calls for their return, and two years after a nationwide reckoning with institutional racism gave renewed attention to those calls.

At a ceremony Tuesday at the Smithsonian’s National Museum of African Art, officials of the museum, which has held 29 bronzes, and the National Gallery of Art, which has had one, handed the artifacts over to representatives of Nigeria’s National Commission for Museums and Monuments. Nine will remain in Washington on long-term loan.

“The Smithsonian is humbled and quite honored to play a small part by transferring ownership to helping to bring long-delayed justice, long-delayed visibility, long-delayed objects brought back to Nigeria,” Smithsonian Secretary Lonnie G. Bunch III said at the ceremony. “We realize as an institution that we are shared stewards of these collections. We are not owners.”

Bunch highlighted the Smithsonian’s new collection policy, which authorizes repatriation of objects for ethical reasons — the first significant update to the 176-year-old institution’s collections management since 2001. “We hope that today’s ceremony sets an example for all cultural institutions,” he said.

Ngaire Blankenberg, director of the National Museum of African Art, which removed the Benin bronzes from view last fall, said the moment reflects a shift in the museum’s practices. “This return sparks the beginning of a new era in our relationship with the royal court, with Nigeria and with Africa and Africans writ large,” she said, calling it “one of many steps” toward creating “more equal power dynamics concerning who owns and who interprets.”

Lai Mohammed, Nigeria’s minister of information and culture, praised the move. “By returning the artifacts,” he said, “these institutions are together writing new pages in history. Their brave decision to return the timeless artworks is worth emulating.”

The Benin bronzes have become an international symbol of the fraught, colonialist histories of Western cultural institutions — from Boston to Berlin. They are at the center of a worldwide movement calling for the return of looted and dubiously acquired artifacts — the Elgin marbles, the Gilgamesh tablet, the Easter Island Moai statute and others — to their places of origin. Tuesday’s ceremony echoed similar ones in Europe in 2021, when Cambridge University and the Quai Branly museum gave up their bronzes. With this latest move, the high-profile Smithsonian — the largest museum system of its kind in the world — hopes to inspire other museums to follow suit.

Tuesday’s ceremony was just one step on a long, complicated journey — the Smithsonian’s Museum of Natural History still has 20 Benin bronzes, which have been placed under review, and the institution has many other objects with controversial origins, including thousands of human remains. Bunch says there are no plans for a comprehensive review of the full collection of 155 million objects. Blankenberg said that her museum is working through a list of objects but declined to give specifics.

Bunch said in an interview after the ceremony that he envisions the return encouraging international accountability.

“It allows us to be more global, and it allows us to make sure that people in Nigeria understand that the Smithsonian is doing work that helps them,” he said. “And as we’re now much more tied through technology, I think that’s going to be a really important part. People around the world are going to say, ‘These are the institutions that have treated us fairly, and these are the ones that have not.’ “

“Audiences are really interested in how objects come to museums. That’s a question we get asked all the time,” she said after the ceremony. “Being more transparent about provenance and the history of an object, I think, really appeals to our audiences and makes the institution more accessible.”

“Benin bronzes” is a catchall term for a wide body of artifacts that date to at least the 16th century. It includes thousands of items made of different materials and depicting various subject matter — for example, commemorative busts of kings and animals from folklore. It is estimated that between 3,000 and 10,000 such objects were stolen by the British, many ransacked from the Kingdom of Benin (present-day Nigeria) in 1897 during a retaliatory, deadly British invasion now known as the “Punitive Expedition.” The largest group of stolen works — about 900 — remain in the British Museum.

A recent Washington Post review of 70 museums found that of the 56 that have Benin pieces, 16 are engaged in a repatriation process. Critics of the repatriation movement have questioned how far museums will go and raised concerns about the care of objects once returned. Speaking at Tuesday’s ceremony on behalf of the oba (ruler) of the Kingdom of Benin, Prince Aghatise Erediauwa called such criticisms “archaic.”

“The truth is that no argument can change looted works into unlooted works or stolen works into unstolen works. There is simply no moral or legal basis for persistently retaining cultural property which was looted during military expeditions or in unequal negotiations, for that matter. This demand by a few art historians and curators serves no purpose other than their own self-interest,” he said. “We are grateful to you and others who are on the side of truth and acknowledge where these works truly belong.”

Blankenberg echoed this sentiment after the ceremony.

“We’re not the guardians of the world. Western museums are not the custodians of all things of the world,” she said. “There’s so many false premises around the debate. People are like, ‘Oh, no, if you give everything back, there’ll be nothing in this museum.’ Honestly, we have 12,000 [objects in our] collections. And if our whole museum is based on stolen objects, then frankly we shouldn’t exist.”

Blankenberg declined to comment on other museums’ progress in ethical collecting but said the process to return the artifacts was smooth. “You don’t deaccession anything in a museum easily, nor should you. And the process is a pain. But there was no resistance or debate,” she said. “It’s the entire institution that is really committed to figuring out what the right thing is.”

The bronzes will head back to Africa in the coming weeks. Their final destination is expected to be the new Edo Museum of West African Art in Benin City, Nigeria, which is set to open in 2025. And here in Washington, Blankenberg is dreaming up an exhibition to familiarize visitors with the history of the bronzes.

“I don’t want to dwell too much that the whole story of these amazing artworks is this one moment of colonial violence,” she said. “We have to be able to understand that these artworks were created within an incredible context and artistry that exists today.”