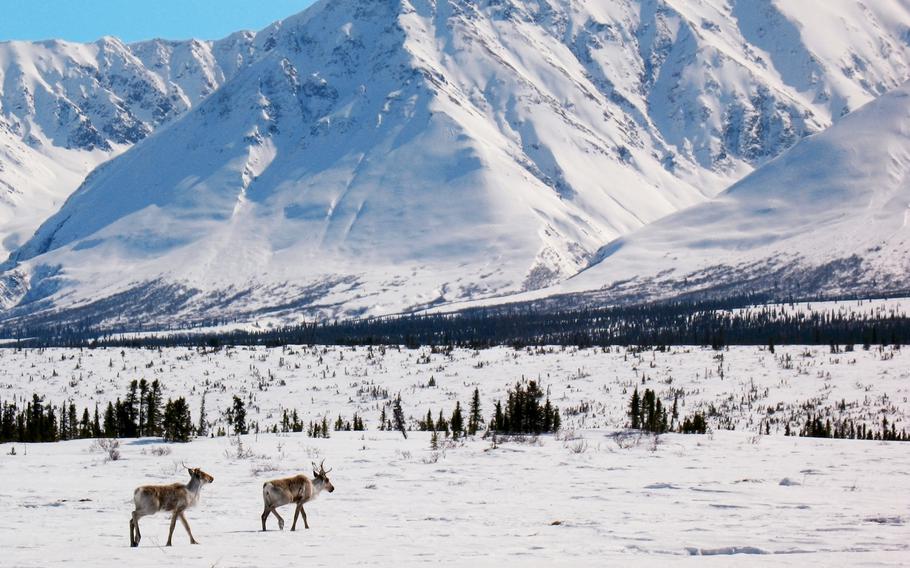 A pair of caribou near the base of the Alaska Range. (Dreamstime)

WASHINGTON (Tribune News Service) — The Biden administration has released its vision for U.S. strategy in the Arctic in a new document that underscores competition with Russia and China over the next decade.

The 15-page document, titled "National Strategy for the Arctic Region," is intended to set the U.S. agenda for the Arctic until 2032. The strategy is focused on security, climate mitigation, economic development and international cooperation in the region.

The Arctic "possesses considerable economic potential, from tourism to vast natural resources," said U.S. Secretary of State Antony Blinken, calling the document "an important step towards shaping the future of the region."

The strategy comes as tensions have ramped up in the Arctic. Russia, the largest of the eight Arctic nations, has built up military infrastructure in the region and is conducting military exercises. The Kremlin is also seeking to up Russia's economic activity in the region through tax incentives for energy companies to invest in the Arctic. Also, China declared itself a "near-Arctic state" in 2018, signaling interest in the region. Russia and China have been collaborating on development in the Arctic, raising U.S. and NATO concerns.

The Biden administration's strategy includes investing in tracking capabilities to monitor threats and activity in the region. The document outlines regular Arctic military trainings and exercises, as well as a plan to expand the Coast Guard icebreaker fleet and support a deep-water draft harbor in Nome.

The strategy also outlines the administration's climate mitigation goals in the region.

Sherri Goodman, a senior fellow at the Wilson Center's Environmental Change and Security Program and the Polar Institute, said the focus on security and climate distinguishes the report from past Arctic strategic documents.

"We're an Arctic nation because of Alaska, but our interests, of course, as the United States are global," said Goodman. "What stands out to me is this strategy elevates attention both to climate change and to security."

An August study found that the Arctic is warming four times faster than the planet. The White House strategy mentions the administration's broad goals to reduce carbon dioxide, methane, and black carbon emissions, and also clean up contaminated Alaskan lands.

The strategy acknowledges that rising temperatures and melting ice in the Arctic could spur new economic opportunity by opening up shipping routes and shifting fish migration patterns. The document states that federal agencies will support sustainable development in Alaska renewable energy, critical minerals production, tourism and research. The strategy also includes investing in Alaskan infrastructure like broadband, ports, and airfields.

The strategy does not explicitly mention investments in natural gas or oil, but discusses supporting a "just energy transition."

That disappointed Alaska Republican Sens. Lisa Murkowski and Dan Sullivan. Sullivan said in a statement that the strategy's "excessive focus on climate change" sends a "troubling message" about resource development in the region.

Sullivan said he worries that "despite America's increasing national economic and security interests in the Arctic that are being directly challenged by Russia, and increasingly challenged by China, the administration will continue to focus on shutting down responsible resource development."

"This strategy very clearly falls short when it comes to our Arctic resources," Murkowski said in a statement. "It gives very little attention to the opportunity and necessity of domestic production of the vast resources in our Arctic."

The Obama administration released a strategy for the Arctic in 2013, and since then, all five branches of the military have released similar documents. Sullivan called the Biden administration's strategic plan a more detailed "improvement" from the 2013 document and Murkowski called it "an important message to the American people that the United States must continue to advance Arctic priorities."

The document makes several mentions of working with Alaska state and local officials as well as Alaska Native communities in executing the Arctic strategy.

The White House released the strategy days after two Russians fled to St. Lawrence Island and requested asylum to avoid mandatory military service, according to Murkowski's office. Murkowski said the nearest federal agencies who could process the Russians were 700 miles away.

"What this incident makes clear is that even as Putin undertakes rapid military and industrial development in Russia's Arctic, the United States is behind in its Arctic initiatives," she said in a statement.

A spokesman for Rep. Mary Sattler Peltola, a Democrat, said in a statement the congresswoman is "happy to see the administration putting a focus on the region but believes the U.S. is far behind in prioritizing the area" and that Peltola was "thrilled to hear the desire to have a greater relationship with Alaska Native Tribes and the push for an Arctic Ambassador."

Goodman said the strategic document opens the door to increased federal funding to the Arctic.

"The Arctic should be getting increased attention within agency budgets as a result of this strategy," she said. "That's something that we're going to need to look at when the President's budget is released next year."

Also, in August, the State Department announced plans to appoint an Arctic Ambassador and the Department of Defense opened the Ted Stevens Center for Arctic Security Studies in Anchorage to facilitate research on Arctic security.