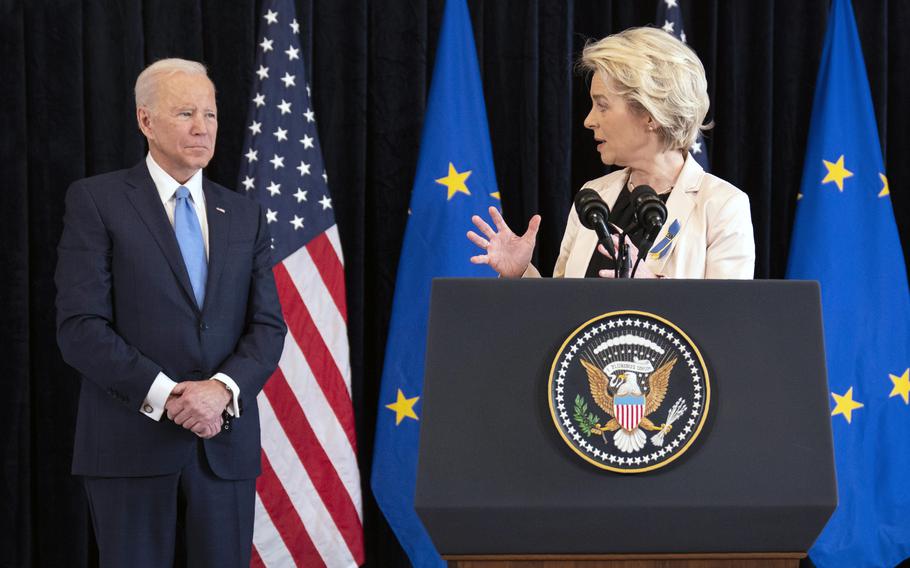 George C. Marshall was doubtless moved to be equated with George Washington. As Harvard University granted the secretary of state an honorary law doctorate on June 5, 1947, its citation called him “a soldier and statesman whose character and ability brook only one comparison in the history of this country.”

But Marshall - the former Army chief of staff during World War II and then arguably the country’s most admired public servant - had something else in mind as he received applause from a crowd of 15,000 in Harvard Yard: pitching a multibillion-dollar aid plan for the broken European continent.

Seventy-five years later, as Russia’s war against Ukraine retests the historic bond between Western Europe and the United States, the legacy of the Marshall Plan has gained renewed relevance - as has the need to understand the frequently miscast initiative.

“The Marshall Plan has become a favorite analogy for policymakers,” said Harvard political scientist Graham T. Allison, “yet few know much about it.”

One reason for the confusion was the anodyne nature of Marshall’s speech itself. “It is logical that the United States do whatever it is able to do to assist in the return of normal economic health in the world,” Marshall told his receptive, if somewhat puzzled, audience that day, “without which there can be no political stability and no assured peace.” That was about as rousing - or as specific - as his short address got.

There was no mention of the Soviet Union, against whose influence the plan was directed. “Any government which maneuvers to block the recovery of other countries cannot expect help from us,” he said. That was it.

Marshall’s speech was vaguely worded for two reasons, said Steil, director of international economics at the Council on Foreign Relations and author of “The Marshall Plan: Dawn of the Cold War.” “First, Marshall wanted to put the burden on the European countries themselves to come up with an integrated recovery plan. Also, Marshall wanted to avoid the impression that he was trying to divide Europe.”

The Soviet Union was nominally welcome to join too. “Moscow was carefully not excluded,” said Steil, but behind the scenes it “was prodded to exclude itself.”

European leaders certainly got the message. Within hours of Marshall’s speech, the British and French foreign ministers were conferring about how much aid they needed to regain their “economic health” and in what form. This collaboration - and the economic ties that bound the 16 nations that ultimately received U.S. loans, grants or commodities over the four-year plan - laid the groundwork for European integration.

Marshall has recently come under criticism from revisionist historians for claiming principal authorship of the plan. But Marshall never denied that the European Recovery Plan - the policy’s official name, which he always used - was the work of many hands.

The plan’s true godfather, according to Steil, was Marshall’s boss, President Harry S. Truman. Truman laid the ideological groundwork for it in a March 1947 speech in which he asked Congress to provide financial support for the Greek government against a Communist insurgency. Articulating what would become known as the Truman Doctrine, the president argued that the United States was “compelled to assist free people in their struggles against totalitarianism” lest its “spread undermine the foundations of international peace and hence the security of the United States.”

Truman’s belief that the Soviets would meddle in Greece turned out to be wrong. But when Marshall led a delegation to Moscow the following month, he came away convinced that the Kremlin had little interest in aiding Europe, which was in social and economic turmoil and had just struggled through the “hunger winter” of 1946-47.

“The patient is sick,” Marshall said in a nationally broadcast radio address upon his return from Russia, “while the doctors debate the cure.” Something had to be done to help Europe and fend off Moscow’s efforts at expanding Communism. Piecemeal aid of the sort that Congress had just granted Greece would no longer do.

Marshall enlisted the big thinkers on the State Department planning staff, led by George Kennan, known as the author of the “containment” policy for deterring the USSR. The result was the Marshall Plan - a moniker Truman fostered “because I wanted General Marshall to get full credit for his brilliant contribution to the measure he helped formulate,” the president said in his memoir.

Marshall led a furious campaign to pass the plan, crisscrossing the country giving pep talks and interviews. “I worked on that as if I was running for the Senate or the presidency,” he later said.

On Nov. 11, 1947, Marshall made an impassioned case for the plan before a joint session of the House and Senate foreign affairs committees. Now his words were anything but anodyne.

“We must not permit the free community of Europe to be extinguished,” he said. “Should this occur, it would be a tragedy for the world.”

Nor was there any need to mince words about Moscow. After briefly flirting with the idea of cooperating, Joseph Stalin had made clear his opposition to the plan, forcing Europe’s Communist bloc to reject it.

“It is now clear that only one power, the Soviet Union, does not for its own reasons share” the goal of restoring Europe, Marshall said.

The Cold War, a phrase that had just come into use that fall, was on. And so was America’s first line of defense: the Marshall Plan.

Did it work? Economically, it’s not clear: The plan’s own accounting showed that the aid to the recipient countries accounted for just about 3 percent of their combined national income between 1948 and 1951. “The importance of the Plan to Europe’s recovery remains a one of contention amongst historians,” said Fredrik Logevall, a Harvard historian and author of the Pulitzer Prize-winning “Embers of War: The Fall of an Empire and the Making of America’s Vietnam.”

But there is little doubt of its success in fortifying European unity and democracy. “It strengthened Western Europeans’ belief in democracy and capitalism and tied the region more firmly in a U.S.-led economic union and later a military alliance,” Logevall said. “Moreover, it helped to undermine Soviet influence in Europe.”

Logevall added, “It served America’s strategic purposes, but it was also charitable to a degree seldom seen in international politics.”

“It is impossible to imagine the E.U. or NATO without the Marshall Plan,” Steil said.

However, the plan’s political and moral legacy was undermined by the Donald Trump administration’s derisive treatment of the U.S.-European alliance, Steil said. And now it’s being tested again by Vladimir Putin’s Russia following the invasion of Ukraine.

Amid that fight, Marshall’s successor, current Secretary of State Antony Blinken, is invoking the Marshall Plan in an effort to maintain the transatlantic unity that has bound the United States and its European allies for three-quarters of a century.

In June, on the anniversary of Marshall’s Harvard speech, Blinken tweeted that in 1947, “European nations rallied to the call to come together, united in purpose, contributing to the revival of Europe. Answering the call together, we can once again prevail, just as the U.S. and Europe did together 75 years ago.”