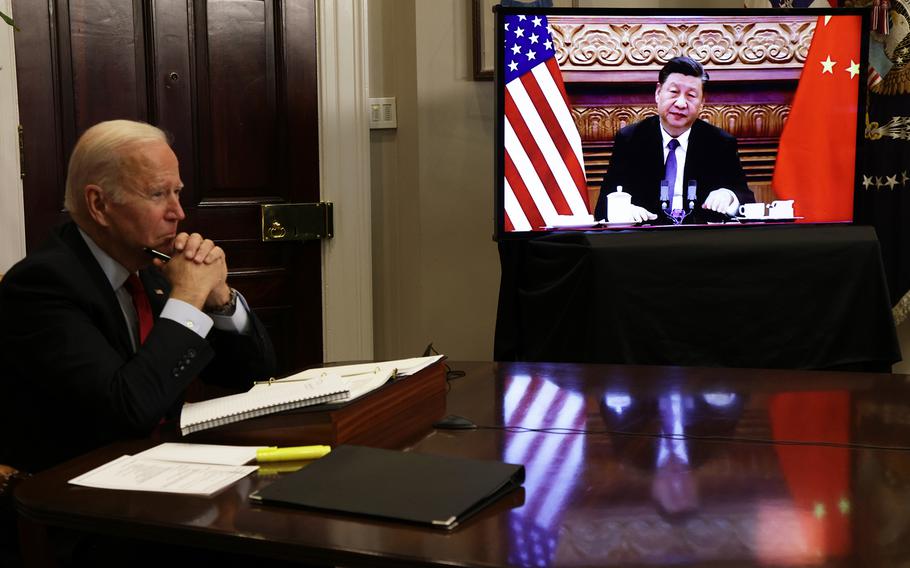 President Joe Biden participates in a virtual meeting with Chinese President Xi Jinping at the Roosevelt Room of the White House on Nov. 15, 2021, in Washington, DC. (Alex Wong, Getty Images/TNS)

(Tribune News Service) — The Biden administration announced new restrictions on China’s access to U.S. semiconductor technology, escalating tensions between the two countries and adding fresh complications to an industry reeling from a slump in demand.

The measures are aimed at stopping Beijing’s push to develop its own chip industry and advance the country’s military capabilities. They include restrictions on the export of some types of chips used in artificial intelligence and supercomputing and also tighten rules on the sale of semiconductor manufacturing equipment to any Chinese company.

Washington is looking to ensure that Chinese companies don’t act as a conduit for the transfer of technology to their country’s military — and that chipmakers there don’t develop the capability to make advanced semiconductors themselves.

China “has poured resources into developing supercomputing capabilities and seeks to become a world leader in artificial intelligence by 2030,” said Assistant Secretary of Commerce for Export Administration Thea D. Rozman Kendler. “It is using these capabilities to monitor, track and surveil their own citizens, and fuel its military modernization.”

The new rules are coming at a difficult time for the chip industry, which is suffering a steep drop in demand for personal-computer and smartphone components. Shares of many of the world’s biggest semiconductor makers tumbled on Friday following reports that the slump may be even worse than thought.

The government’s actions add another layer of uncertainty for investors already trying to work out how much demand for semiconductors might shrink. Companies such as Applied Materials Inc. and Intel Corp. can’t easily walk away from China, the biggest single market for their products and a key part of a global supply chain for electronics used everywhere in the world.

Chipmaker stocks have struggled throughout 2022, following three straight years where the group climbed between 40% and 60%. The Philadelphia Stock Exchange Semiconductor Index is down nearly 40% so far this year, on track for its biggest annual drop since 2008, and it recently fell to its lowest level since November 2020.

The losses have been widespread, with nearly every component of the industry benchmark index in negative territory this year. Nvidia Corp. and Advanced Micro Devices Inc., former highfliers, have declined almost 60%. AMD reported preliminary third-quarter revenue on Thursday that was weaker than expected, marking the latest in a series of chipmaker warnings. AMD and Nvidia have already disclosed that the China-related restrictions on AI chips will hurt their sales.

Nvidia said Friday that the broader regulations just announced won’t have have much additional effect on its business, which was already restricted by previous export controls.

“These regulations impose on the broader industry controls on processors meeting certain thresholds that we were already subject to,” Nvidia said in an emailed statement. “We don’t expect the new controls, including restrictions on sales for highly dense systems, to have a material impact on our business.”

When the new rules come into force, it will be harder for providers of chips used in Chinese supercomputers and related gear to get permission to fill orders. They should presume requests will be denied, according to senior Commerce Department officials.

Commerce also put a raft of restrictions on supplying U.S. machinery that’s capable of making advanced semiconductors. It’s going after the types of memory chips and logic components that are at the heart of state-of-the art designs.

While there will be more latitude for overseas companies needing technology for their own operations in China — or for parties that can prove they’re making things there for immediate export elsewhere — Commerce said it will enforce the rules and also cut off support for existing deployments of machinery covered by the restrictions.

The U.S. is home to the biggest block of companies that design vital electronic components — and provide the complex machinery needed to manufacture them — but other regions have capabilities that could undermine some of the government’s efforts.

Commerce Department officials acknowledged that overseas cooperation is necessary to avoid hampering the initiatives and said there are talks with other parties underway around the world on the topic. The officials declined to characterize how advanced the negotiations are or how likely they are to result in similar actions in key countries, such as the Netherlands and Japan.

— Logic chips using so-called nonplanar transistors made with 16-nanometer technology or anything more advanced than that. Generally speaking, the smaller the number of nanometers, the more capable the chip.

For companies with plants in China — including non-U.S. ones — the rules will create additional hurdles and require government signoff.

South Korea’s SK Hynix Inc. is one of the world’s largest makers of memory chips and has facilities in China — part of a supply network that sends components around the world.

“The new measures restrict sale of equipment for memory products of certain level of technology or above, but allow Korean chipmakers to export if they have a license from the Commerce Department,” the company said in a statement. “SK Hynix is ready to make its utmost efforts to get the U.S. government’s license and will closely work with the Korean government for this.”

Separately, Commerce added more names to a list of companies that it regards as “unverified,” meaning it doesn’t know where their products end up being used. The 31 additions are all Chinese. That indicates that U.S. suppliers will face new hurdles in selling technologies to those entities.

The biggest name to be added to the list is Yangtze Memory Technologies Co. The memory-chip maker is widely regarded as being the best bet China has of breaking through into the front ranks of the industry and has made progress with advanced products for chip-based storage.

The new restrictions, which begin to take effect this month, are intended to break the link between Chinese companies and their country’s military and security apparatus. But the U.S. chip industry has expressed concerns that moving too aggressively could put domestic companies at a disadvantage. They worry that losing China sales will hurt their ability to spend on innovation and potentially help their overseas competitors.

The Semiconductor Industry Association, a lobbying group representing all of the largest U.S. chipmakers, said it’s evaluating the impact of the new export controls and will ensure compliance with the restrictions.

“We understand the goal of ensuring national security and urge the U.S. government to implement the rules in a targeted way — and in collaboration with international partners — to help level the playing field and mitigate unintended harm to U.S. innovation,” the association said in a statement.

Anyone receiving the unverified designation has to submit to checks on where their products go. While that process is underway, their U.S. technology suppliers will be required to go through extra certification steps.

Successfully proving they’re not breaking rules allows the companies to be removed from the list. Not doing so — or failing to cooperate — risks putting them on the so-called entity list, meaning that U.S. technology exports to them are subject to prior approval by the Commerce Department.

Bloomberg reported this week that the administration was readying new restrictions, part of a broader strategy that also includes bolstering domestic chip production. Earlier this year, Biden signed a bill that promises to infuse about $52 billion into the U.S. semiconductor industry.

“Our actions will protect U.S. national security and foreign policy interests while also sending a clear message that U.S. technological leadership is about values as well as innovation,” Kendler, the Commerce official, said Friday.