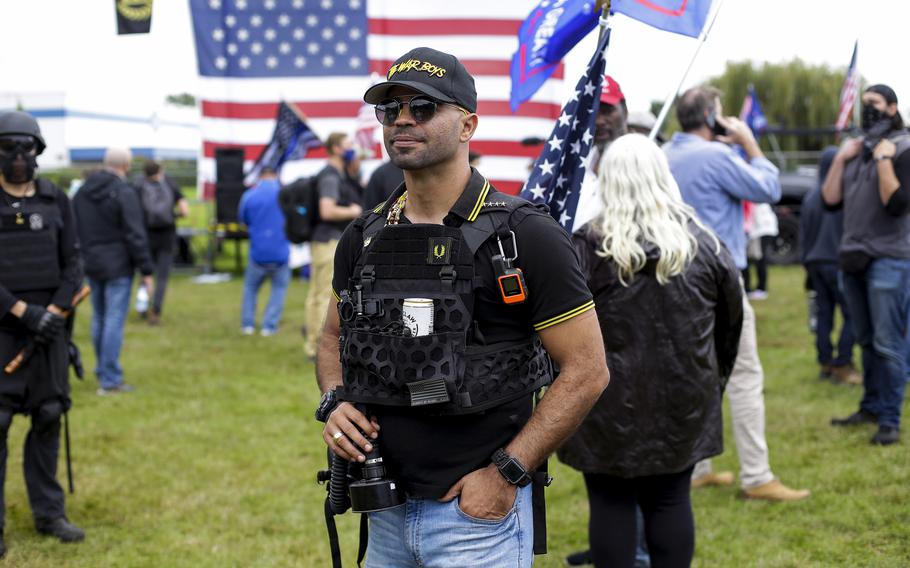 WASHINGTON — A lieutenant of longtime former Proud Boys chairman Henry “Enrique” Tarrio became the group’s first member to plead guilty to seditious conspiracy in the Jan. 6 Capitol riot on Thursday, deepening the government’s case against an organization accused of mobilizing violence to prevent the inauguration of Joe Biden.

Jeremy Bertino, 43, of Belmont, N.C., becomes a potential key witness for the Justice Department against Tarrio and four other Proud Boys leaders, some of whom had ties to influential supporters of President Donald Trump. The five Proud Boys defendants are set to face trial in December on charges including plotting to oppose by force the presidential transition, culminating in the Jan. 6, 2021, attack at the Capitol.

At a hearing before U.S. District Judge Timothy J. Kelly in Washington, Bertino pleaded guilty to that count and to one count of illegal possession of firearms as a formerly convicted felon, punishable by 51 to 63 months in prison at sentencing under advisory federal guidelines, prosecutors said.

From December 2020 to January 2021, Bertino “did knowingly combine, conspire, confederate, and agree with” the Proud Boys leaders “and other persons known and unknown, to oppose by force the authority of the Government of the United States and to delay by force the execution of the laws governing the transfer of power,” the two-page charging document alleges.

In a sign of the sensitivity and potential importance of Bertino’s testimony, prosecutors agreed that if he provides “substantial cooperation,” they would seek leniency at sentencing and enter Bertino into a Justice Department witness protection program.

Bertino held a place in the top inner circle of Proud Boys leaders accused of conspiring to impede Congress with angry Trump supporters as lawmakers met to confirm the election results. Bertino’s home in North Carolina was searched in March at the same time that Tarrio was arrested on charges that he and at least four others “directed, mobilized and led” a crowd of 200 to 300 supporters onto Capitol grounds. Many in that crowd are accused of leading some of the earliest and most aggressive attacks on police and property.

At the time of the search, Bertino allegedly possessed two pistols, a shotgun, bolt-action rifle and two semiautomatic AR-15 style rifles with scopes. Bertino was convicted in 2004 of first-degree reckless endangerment in New York state, a felony, and sentenced to five years of probation with a period of local jail time, according to court filings.

Stone remained in contact with Trump at Mar-a-Lago and in Washington in the weeks leading up to the Jan. 6 attack, coordinated post-election protests and privately strategized with figures such as former national security adviser Michael Flynn and ‘Stop the Steal’ organizer Ali Alexander, The Washington Post has reported.

Stone also communicated via encrypted texts after the 2020 election with Tarrio as well as Stewart Rhodes, the founder and leader of a second right-wing extremist group, the Oath Keepers, accused of playing an outsize role in planning for and organizing violence at the Capitol. Rhodes was on trial Thursday for seditious conspiracy in the same courthouse where Bertino pleaded.

Tarrio and Rhodes were part of a Signal chat group titled “F.O.S.” — or Friends of Stone, and the pair met in an underground parking garage next to the Capitol the evening before Jan. 6 with leaders of two pro-Trump grass roots groups.

Jones, meanwhile, promoted a Nov. 20, 2020, podcast by Tarrio in which he suggested in an expletive-laden call that Trump supporters infiltrate the Biden inauguration and turn it into a “circus, a sign of resistance, a sign of revolution.” That podcast, which featured Tarrio co-defendants Ethan Nordean and Biggs, a former Infowars employee, was first reported by online news site the Daily Dot and viewed by The Post.

Rhodes, Tarrio, Nordean and Biggs have pleaded not guilty to seditious conspiracy and other charges. Stone, who has not been charged, has categorically denied involvement in the Jan. 6 breach. He has previously told The Post, “Any claim, assertion or implication that I knew about, was involved in or condoned the illegal acts at the Capitol on Jan. 6 is categorically false and there is no witness or document that proves otherwise.”

An attorney for Alexander said he testified to a federal grand jury this summer after being assured he was not a target of the investigation. Jones’s attorney did not immediately respond to a request for comment.

Tarrio and Bertino were not present in Washington on Jan. 6, the only two of more than 870 federally charged defendants who were not. But prosecutors alleged that Bertino was in direct contact with Tarrio, who oversaw events from Baltimore, and Nordean, who was in charge in Washington, according to a 10-count indictment against the pair and earlier charging papers.

For instance, Bertino was Nordean’s guest in a Parler-linked video on Dec. 31 in which Bertino called Proud Boys “soldiers of the right wing” at war, and Nordean said that Americans must “desensitize” themselves to violence.

On Dec. 30 and 31, according to his indictment, Tarrio exchanged messages with an individual who sent him a plan called “1776 Returns” to occupy “crucial buildings” in Washington, including the House and Senate. His indictment stated that the individual messaged Tarrio, the “revolution is [sic] important than anything,” to which Tarrio replied, “That’s what every waking moment consists of ... I’m not playing games.”

On Jan. 4, according to his indictment, Tarrio posted a voice message to a “Ministry of Self Defense” leaders group of Proud Boys, stating, “I didn’t hear this voice note until now, you want to storm the Capitol.” After the Capitol was breached, Tarrio wrote in a Telegram group chat, “We did this,” prosecutors said.

That night, Bertino — previously identified as “Individual A” or “Person 1” in charging papers — messaged Tarrio “1776,” exulting with a profanity, and Tarrio replied “The Winter Palace,” according to the indictment. Prosecutors allege it is a reference to a Proud Boys planning document that had a section called “Storm the Winter Palace,” referring to the Russian Revolution of 1917 and the former imperial palace in St. Petersburg that was raided by Bolsheviks, CNN first reported.

Bertino also suggested to Tarrio that the election result could be invalidated if lawmakers failed to vote by midnight, an argument that echoed the effort by Trump’s own lawyers to deny Biden’s victory.

Bertino has been on the radar screen of both the FBI and a House select committee investigating the events of Jan. 6. Bertino told the House panel that membership “tripled” after Trump famously urged the Proud Boys to “stand back and stand by” during a 2020 presidential debate, according to a video clip of his interview played in a House hearing in June.

Social media posts, video recordings from Jan. 6 and earlier charging papers by the FBI also indicate that Nordean and Proud Boys leaders were motivated to confront police that day in part by what they perceived to be an insufficient response to the stabbing of Bertino outside Harry’s Bar in downtown Washington after a pro-Trump demonstration the previous month.

In a Proud Boys live-stream video taken at the Capitol shortly before it was stormed, Nordean can be seen shouting at police through a bullhorn, “You took our boy in, and you let our stabber go” — an apparent reference to Tarrio’s arrest and the dismissal of charges against another man initially accused of being involved in a Dec. 12 melee. On Jan. 4, Nordean shared a post of a photograph of himself and Bertino captioned, “And fight we will,” and included a link to his podcast “Rebel Talk with Rufio,” in which he and Bertino discussed the stabbing.

Before Bertino, all four of 14 people hit with the historically rare charge of seditious conspiracy in the Capitol riots were affiliated with the Oath Keepers. At least two other Proud Boys defendants have pleaded guilty to conspiring to obstruct Congress’s joint proceeding on Jan. 6 and agreed to cooperate with the government, Matthew Greene, 34, of Syracuse, N.Y., and Charles Donohoe, 34, of Kernersville, N.C.