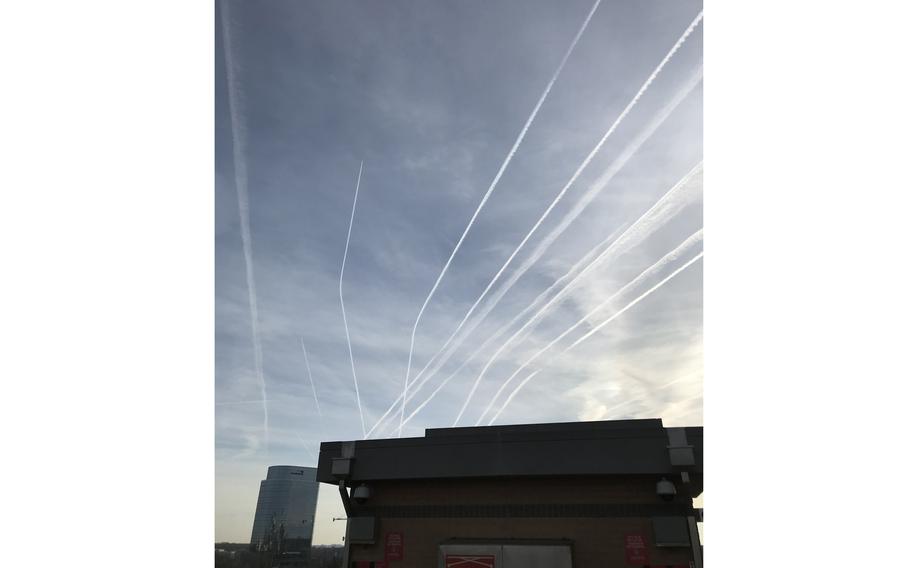 A collection of aircraft contrails in the skies above McLean, Va., in 2019. Contrails, the white clouds that trail behind airplanes, are known by researchers to trap heat from the Earth’s surface in the atmosphere. (Stars and Stripes)

The aviation sector’s burning of fossil fuels isn’t the only way it contributes to climate change: Contrails, the white clouds that trail behind airplanes, are known by researchers to trap heat from the Earth’s surface in the atmosphere. They are formed when water vapor from engine exhaust mixes with cold air, and their environmental impact is significant.

On Thursday, Delta Air Lines and the Massachusetts Institute of Technology’s Department of Aeronautics and Astronautics announced a partnership to discover new ways to eliminate persistent contrails — that is, the roughly 10% of contrails that stay in the sky for longer than usual and have a more pronounced heating effect. The group will use an algorithm developed by MIT that predicts altitudes and locations where contrails are likely to form.

The joint research group has already completed more than 40 testing flights and has plans for live experiment flights and simulations. Past trials and simulations by MIT and Delta showed that 70% to 90% of all contrails could be avoided through flight and altitude adjustments. The tools and technology developed during the study will be created under an open-source license. Delta declined to comment on how much it’s investing in the partnership or how long it would last, adding the collaboration would leverage the airline’s flight data, operations and more.

“Much of the focus on climate within the aviation field is understandably on carbon, but contrail avoidance has the potential to greatly reduce the environmental impact of air travel quickly and at low cost,” said Steven Barrett, director of MIT’s Laboratory for Aviation and the Environment. “This collaboration will help us better understand, predict and ultimately avoid persistent contrails. Working with airline partners gives us the needed access to flights and operational expertise to conduct successful flight trials.”

Pam Fletcher, Delta’s chief sustainability officer, said if the study can identify where in the atmosphere persistent contrails will form, pilots can avoid flying in those areas, the same way they try to avoid flying in areas where there’s turbulence.

Aviation contributed about 2% of the world’s total carbon emissions in 2021, and the sector’s emissions are expected to grow rapidly, according to the International Energy Agency. The agency says sustainable aviation fuels and technological advances leading to battery electric and hydrogen-powered aircraft are critical for the sector to reach net zero emissions by 2050.

“We would hope to eliminate, but that’s a big statement and it’s all about progress over perfection,” Fletcher said about contrails. “If we can start to reduce and we can get to perfection someday that eliminates, that’d be fantastic.”