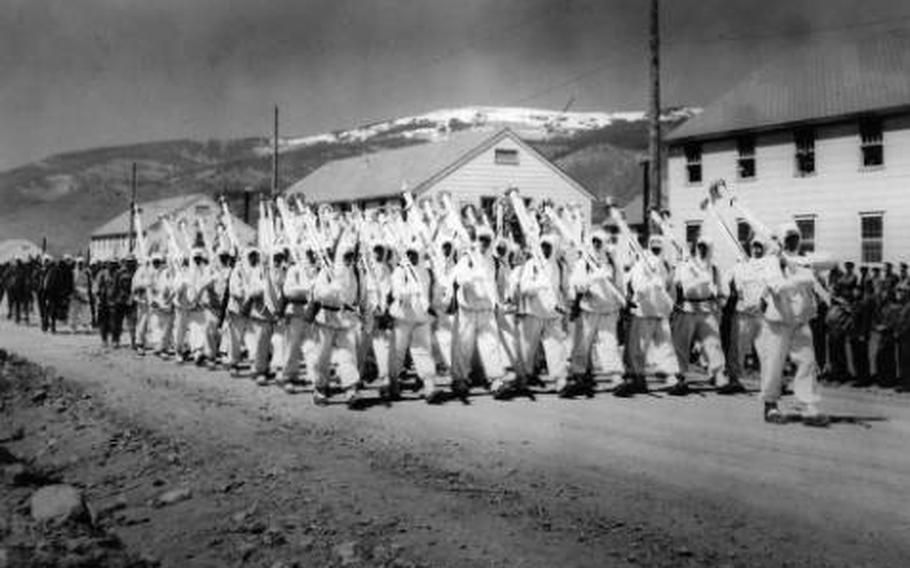 10th Mountain Division soldiers parade down a street at Camp Hale, Colo., probably in 1943. They are wearing their “whites” — winter camouflage uniforms — and carry white skis on their right shoulder as rifles are normally carried while on parade. (U.S. Army Signal Corps)

(Tribune News Service) — President Joe Biden will travel to Colorado next week to designate a historic military site as a national monument, delivering on a key priority of Democratic Sen. Michael Bennet, who is fighting for reelection.

According to three people familiar with the planning, Biden and Bennet are set to appear together at an event Wednesday where the president will officially designate Camp Hale, a World War II-era training site nestled along the Continental Divide, as a national monument. The move, which Bennet and Colorado's predominantly Democratic congressional delegation have pushed for, will protect the site's historic buildings and wildlife habitats from potential development by energy companies and honor the veterans who trained there decades ago.

Biden has previously expanded existing national monuments, but Camp Hale would be the first entirely new monument designated since he took office.

The three people said officials are still trying to work out the logistics of getting Biden to Camp Hale, which sits at 9,200 feet above sea level in the Colorado high country. Such a trip would likely require Biden to fly to Eagle County Regional Airport on Air Force One and then take Marine One to the site itself. If the logistics are too onerous, the event could take place in the Denver metro area instead.

The designation is intended to bypass gridlock on Capitol Hill and boost Bennet, who is seeking a third term in a state that has become bluer since he was appointed to an open Senate seat in 2009.

Polls show Bennet leading Republican Joe O'Dea, who has emphasized his opposition to GOP abortion bans in ads and is running as a more moderate candidate than many of his party's other Senate hopefuls.

But OPEC+, the group of oil-producing nations led by Saudi Arabia, moved Wednesday to cut oil production — a blow to the Biden administration, which worked hard to head off the move.

The cartel's decision could imperil Bennet and other congressional Democrats. Republicans have long criticized Democrats for limiting domestic energy production. Those attacks may prove more potent if gas prices, which have dropped significantly in recent months, rise again.

Bennet's bill to create a national monument at Camp Hale passed the House with bipartisan support, but ran aground as the evenly divided Senate refused to take up the measure. Biden's action relies on the 1906 Antiquities Act, which authorizes the president to protect public lands and waters for the benefit of all Americans.

As president, he has already used the act three times to restore full protections to three national monuments that President Trump reduced in size, including Utah's Bears Ears and Grand Staircase-Escalante, home to some Native American settlements.

Biden's stop in Colorado is likely to be the first part of a multiday Western campaign swing that will also bring him to California and perhaps a third state. Although plans remain in flux, he is scheduled to attend a fundraiser for Democratic House candidates in Los Angeles on Thursday along with Speaker Nancy Pelosi (D-San Francisco), an administration official said.