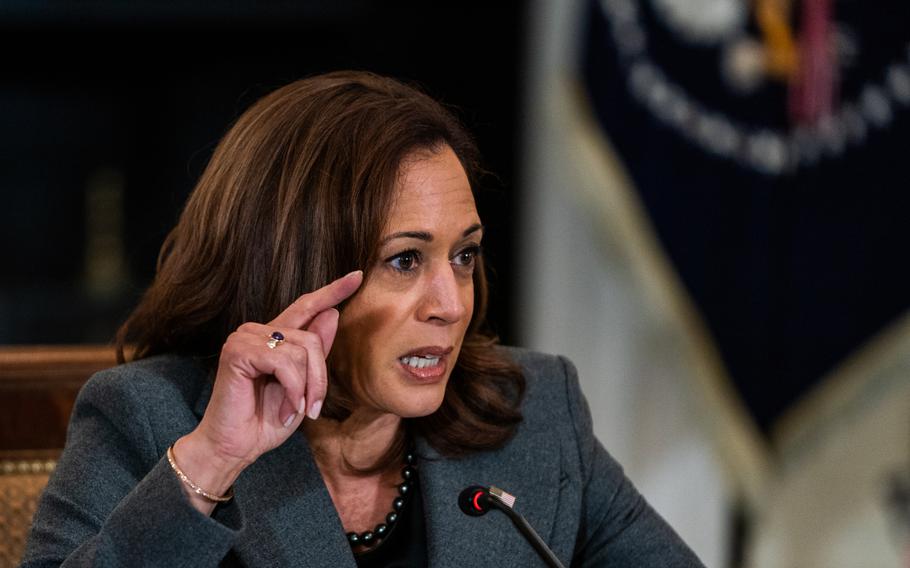 Vice President Harris was in a minor car accident in a D.C. tunnel, but the Secret Service initially described the incident as a "mechanical failure" in an alert. (Demetrius Freeman/The Washington Post)

WASHINGTON — A motorcade taking Vice President Harris to work was in a one-car accident on a closed roadway in Washington D.C. Monday morning, an incident that concerned both the Secret Service director and the vice president and revived worries about the agency’s history of concealing its mistakes, according to two people familiar with the incident.

The Secret Service agent driving Harris in a sport utility vehicle struck the curb of a downtown tunnel hard enough that the vehicle’s tire needed to be replaced, bringing the motorcade to a standstill near Foggy Bottom at about 10:20 a.m., said the people, who spoke on the condition of anonymity to share internal discussions.

Harris had to be transferred to another vehicle in the motorcade so agents could safely spirit her to the White House. The routine nature of the travel and the high level of training required for agents who drive the president and vice president led many in the Secret Service, as well as Harris, to question how such an accident could happen.

The Secret Service also failed to note key details of the incident in an electronic message formally alerting senior leadership to the motorcade’s delay. The agency’s protective intelligence division reported that “a mechanical failure” in the lead car had forced agents to transfer Harris to another vehicle during a scheduled movement to the White House, according to details of the alert shared with The Washington Post.

By Monday afternoon, Secret Service Director Kim Cheatle received information from other agents that the alert did not accurately convey what happened, one of the people said. In fact, many other Secret Service agents on Harris’s detail and at the White House, as well as Harris, knew her driver had actually hit the side pavement of a tunnel.

A spokeswoman for the vice president said Harris is grateful for all the Secret Service does to keep her safe.

“The Vice President sustained no injuries and appreciates the quick response by her USSS detail to get her to the White House safely,” Kirsten Allen said in an emailed statement.

Secret Service spokesman Anthony Guglielmi said the driver overcorrected when steering, leading to the accident. He said Harris was unharmed and delivered safely to the White House.

“During a protective movement Monday, a vehicle in a motorcade had a minor overcorrection and struck a curb,” he said. “The protectee was transferred to a secondary vehicle, and the motorcade continued to its destination. There were no injuries to anyone.”

He said agents did not initially share full details of what caused the problem in the vice president’s motorcade in the formal written alert, but later briefed their superiors in person.

“Initial radio traffic indicated this was a mechanical failure, and that was communicated to agency leadership by personnel supporting the motorcade movement,” he said. “After the protective movement was completed, leadership was verbally updated with additional pertinent facts that the vehicle struck a curb.”

Harris was not in danger because she was quickly moved to another vehicle and medical staff examined her at the White House to ensure she had no injuries, said Guglielmi.

On Monday evening, video footage of Harris’s motorcade blocking the tunnel — and agents scrambling out of follow-up cars to reach Harris — surfaced on TikTok. The video appeared to be taken by phone from someone in a building overlooking Virginia Avenue.

The alert that initially chalked the delay up to a “mechanical failure” was sent as part of standard protocol for sharing information on security developments or concerns related to the White House or any of the officials or family members the Secret Service protects. These alerts are official documents the agency’s protective intelligence division sends to the phones of top officials, and have been used to warn them in the past, for example, when a person tries to jump the White House fence, or when agents make a change to security plans due to a new concern or a threat.

Cheatle, who is the second woman to lead the Secret Service, has been in the job for a month after President Biden named her the new director in late August. She has confided to allies that she was disturbed by the inaccuracy of the alert related to the Harris accident, according to one Secret Service official who spoke on the condition of anonymity to share internal discussions, and was relieved to get the fuller account later that day. A spokesman declined to comment on what information Cheatle received or her reaction.

The Secret Service has had a long, troubled history of covering up its own mistakes and misconduct, with the most senior leaders and managers often relying on the shroud of secrecy covering presidential security to cover up agency foibles and failures.

The Secret Service misled the public and the first family about a shooting at the White House in 2011, claiming it was a group of gang members shooting at each other when they had information the shooter was trying to kill President Obama. In 2014, the Service gave incorrect information about a mentally troubled veteran who was able to jump the White House fence, reporting that he was not armed when he was, and that he was stopped at the door when he actually got deep inside the White House mansion. After a night of drinking at an agent’s retirement party in 2015, the most senior agent in charge of White House security drove with another senior supervisor onto the White House grounds and through an area closed due to an ongoing investigation of a possible bomb. Despite dozens of Secret Service personnel being aware of the incident, no one reported it to the director at the time. Then-Director Joseph Clancy learned of the security breach from a former agent and friend.