This astronaut trains by flying fighter jets; a reporter went along for the ride

BOZEMAN, Mont. — We’re heading down the runway, gaining speed for takeoff when the pilot says it calmly, matter-of-fact and without warning: “afterburner.”

I can barely make him out over the roar of the engines, but then the MiG-29 fighter jet we’re strapped into leaps to what feels like warp speed, points up severely and starts banking right with a force that shifts the horizon and fills me with a flash of panic. It feels like some part of me is left on the tarmac — my stomach most likely, or perhaps a vital organ. It’s a hollow, unbalanced sensation that leaves me with an unsettling thought: I’m in real trouble.

I knew we would fly fast and forceful. That we would pull serious Gs and go inverted. That, after all, is why we’re here. The pilot is an experienced aviator and astronaut, who is training to lead his next space mission the same way John Glenn, Alan Shepard and the rest of the Mercury astronauts with the “right stuff” did at the dawn of the space race.

Only, the pilot sitting in front of me in the cockpit is no NASA astronaut. He never served in the military. Rather, Jared Isaacman is a tech billionaire who dropped out of high school to start his company and is now in the vanguard of the new Space Age.

Last year, Isaacman, who is 39, and three other private citizens completed a historic mission, flying around Earth in a SpaceX capsule for three days in the first all-civilian spaceflight to orbit, known as Inspiration4. Recently, he has commissioned three more flights from SpaceX, the California company founded by Elon Musk, in what amounts to a private spaceflight endeavor that seeks to open a frontier in commercial spaceflight with what he calls the Polaris Program.

Isaacman, who has not said how much he paid for the Inspiration4 flight, or the Polaris Program, has said he intends to break new ground with each of the flights by leveraging SpaceX’s growing capabilities. In the first of those missions — scheduled for March — Isaacman, two SpaceX engineers (Sarah Gillis and Anna Menon) and a former Air Force pilot (Scott “Kidd” Poteet) are planning to spend up to five days in orbit and fly deeper than any human spaceflight mission since the Apollo era. But perhaps the most daring part of what they call the Polaris Dawn mission is that they intend to attempt a spacewalk and become the first private citizens to do so.

The next of those flights could end up going to NASA’s Hubble Space Telescope, docking with it and raising its orbit, which in turn would extend its life. For now, NASA and SpaceX are only studying whether that is possible. But during a news conference Thursday, Isaacman said it “would certainly fit within the kind of the parameters we established for the Polaris Program.”

The third flight would be the first human flight of SpaceX’s next-generation Starship rocket.

To prepare, his crew has already been scuba diving, which simulates weightlessness, and summited the more than 19,000-foot-high Cotopaxi volcano in Ecuador as a team-building exercise. They’ve also experienced a zero-G flight in a 727 airplane that flies in parabolas and gives passengers about 30 seconds of weightlessness at a time, and they spend hours training at SpaceX headquarters in simulators as well as a mock-up of the Dragon spacecraft.

Now I’m here with a few other journalists, SpaceX employees and people who have supported Isaacman in his spacefaring endeavors to participate in the fighter jet training portion of the program.

The idea is to get “comfortable with being uncomfortable,” says Isaacman, who founded Shift4 Payments, which processes more than $200 billion annually. Spaceflight is a difficult, scary endeavor that doesn’t come with a game-over button. On the Inspiration4 flight, a couple of crew members got sick on the first day, as often happens in space. The toilet broke, sounding an alarm.

“You can easily see any kind of just normal human being like, ‘You know what? I’ve had enough. I’m ready to come home now. I don’t feel good, and I’ve got no bathroom and I just want it to end,’ “ Isaacman says. “But it doesn’t work that way in spaceflight.”

So he takes the crew to the mountains, “where people are unhappy and cold and wet.” And in rollicking fighter jet rides that simulate the gravitational force of a rocket taking off or reentering Earth’s atmosphere.

The simulators at SpaceX are great for training, “but you can walk out of the simulator and go get a cup of coffee,” he says. In a jet, there is no escape.

For decades, NASA’s astronauts have trained in T-38 jets, breaking the sound barrier, pushing limits, getting used to operating in conditions that strain body and mind. So much of astronaut training is done on the ground, except when they step into those fighters. “It’s actually the most important training that we do as astronauts,” former NASA astronaut Terry Virts once said. “It’s the one place where we’re not in a simulator. It’s real flying and if you make a mistake, you can get hurt or break something or run out of gas. There are a lot of things that happen in the real world in a T-38 that don’t happen in the simulator.”

Isaacman owns a fleet of fighter jets — the MiG he acquired from the estate of the late Paul Allen, the co-founder of Microsoft and a fellow space enthusiast. Isaacman may be a civilian, but he’s an elite pilot who turned a lifelong passion into an enterprise. In 2009, he shattered the record for the fastest flight around the world. He’s flown in air shows and founded a company, Draken International, that provided training to U.S. military pilots.

As he performs a series of last-minute safety checks, I strap in. Helmet on, the sweet, rancid scent of jet fuel engulfing a cockpit already made claustrophobic with all sorts of levers and switches I dare not touch. It all feels real to me, and I check my heart rate on my Apple watch. We’re close to takeoff but still on terra firma, and yet I can feel the throb of my pulse. Sitting atop the Saturn V rocket that propelled the Apollo 11 crew to the moon, Neil Armstrong’s was 110 beats per minute.

Isaacman hits the afterburner, injecting a burst of fuel that ignites the exhaust and gives us additional thrust as we lift off. He banks the jet hard right, bringing the ground into clear focus. I don’t look at my watch again. I don’t want to see what ugly numbers appear.

The discomfort that accompanies takeoff comes as a shock. I’m strapped into the seat, tethered by twin harnesses that come over my shoulders and across my chest as well as another pair across my thighs, so that I can barely move. And yet I feel a deep sense of unbalance, as if in free fall, which makes no sense given that I’m strapped in tighter than a baby in a car seat.

It’s a wholly unfamiliar sensation that, thankfully, comes with a precedent. I’ve never flown in a fighter jet before, but I have flown on a zero-G flight, and the sensation of being well outside my comfort zone — and the fear that accompanies it — is familiar. And so when Isaacman levels the jet and asks me how I’m doing, I reply that I’m fine. I don’t know that that’s entirely true, but my stomach — or whatever part of me that had gone missing - has returned. I feel balanced again, comfortable — ready, I think, for what is to come.

The MiG is no comparison to SpaceX’s Falcon 9 rocket. The top speed is Mach 2, or twice the speed of sound. SpaceX’s towering rocket is powered by nine engines that shoot the Dragon spacecraft into orbit at Mach 22. Still, the MiG is an impressive piece of machinery — a Formula One racecar with wings — that leaps when Isaacman wants it to.

Over the next half-hour, we fly in formation, with another pair of fighter jets unsettlingly close. We do a roll, flying upside down for an instant — a topsy-turvy sensation that mimics the disorienting feel of space, where there is no up or down. To keep from getting nauseous, I keep my head still, my gaze on the horizon, and watch the world twirl — the ground where the sky used to be. Jared Isaacman, right, watches from the hangar as mission commander Todd Ericson takes flight in the MiG. The idea is to get "comfortable with being uncomfortable," Isaacman says. (Jonathan Newton/The Washington Post)

Isaacman banks hard to the right and left, increasing the force of gravity, which makes me feel as if there is a crushing weight on my chest. Ultimately, we pull about 6 Gs, or six times the force of gravity. But thankfully, I’m wearing a pair of pants that automatically inflates whenever we start pulling Gs. The pressure from the suit keeps the blood in my torso, preventing lightheadedness or, in more serious circumstances, loss of consciousness.

Each pass gives me more confidence. What was once intimidating is now fun. Then, I can tell, the flight is nearly over. We’re heading back to the tarmac, and now, comfortable being uncomfortable, I want more. “Just one more roll?” I ask. But the other jets have joined us in formation, and it’d be too dangerous.

Still, Isaacman assures me, the flight’s not over yet. He points the jet low and roars past the hangar, where people are outside watching and waving. Another blast of the afterburner and he banks high and right again into the deep blue sky, and as I lean into the turn, I’m grateful to be aloft just a while longer. 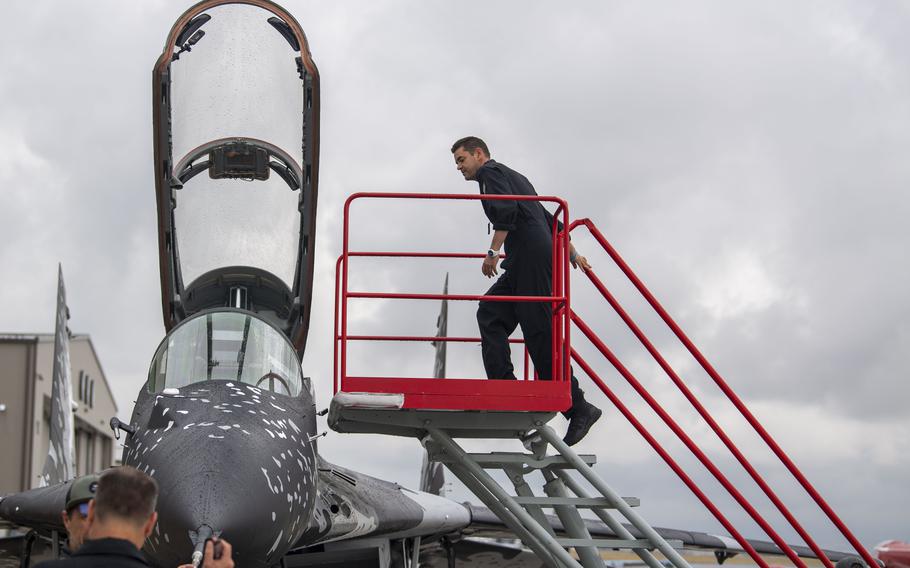 Jared Isaacman, a veteran of the first all-civilian spaceflight to orbit, inspects his MiG fighter before a training flight. The tech billionaire has great ambitions with the Polaris Program. It will include two more flights in SpaceX's Dragon spacecraft and the first human flight of SpaceX's next-generation Starship rocket. (Jonathan Newton/The Washington Post)