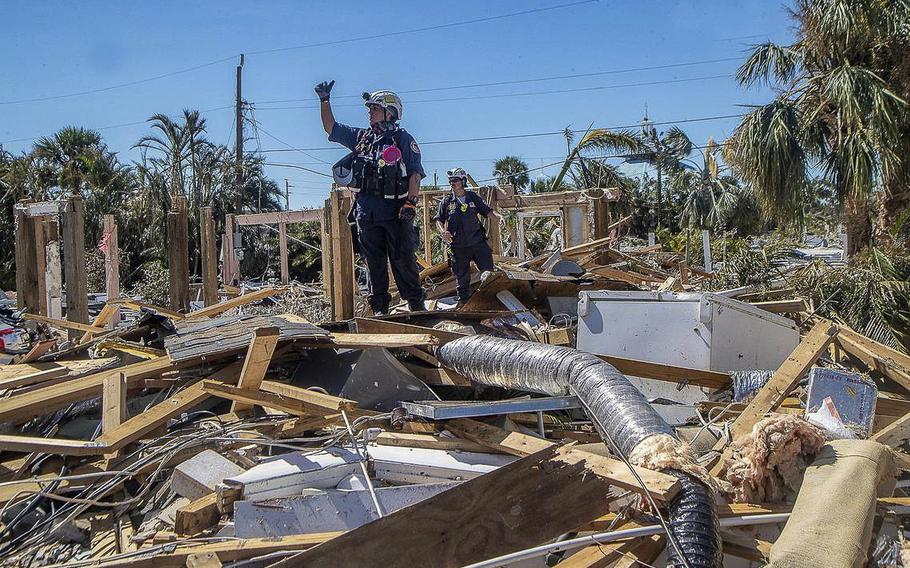 A member of a search and rescue team confirms the discovery, after searching the rubble on a property in Fort Myers Beach on Friday Sept. 30, 2022, two days after Hurricane Ian hit Florida’s west coast as a Category 4 storm. (Pedro Portal/TNS)

(Tribune News Service) — Pasco, a young black Labrador retriever on his first search and rescue mission, quickly picked up the scent on Anchorage Street. He led a Miami firefighter to the top of a rubble pile and jumped down the other side.

”Confirmed!” the firefighter shouted over the din of a helicopter passing overhead. “One deceased.”

Pasco is trained to find live humans. Other dogs are trained to find human remains. But 48 hours after Hurricane Ian attacked this mellow beach town, emergency crews were discovering more dead people than they were saving trapped people.

As bright sunshine lit up the clear blue sky Friday, the firefighter grabbed a rain-soaked maroon bedspread and covered the body slumped on lumber from what used to be a bedroom or kitchen or bathroom. It was impossible to tell where in the house the victim may have tried to seek shelter when an 8- to 10-foot storm surge submerged the barrier island on Wednesday afternoon.

The firefighters of Squad 6, Florida Task Force 2, radioed a medical unit to pick up the fourth body they’d found on their second day of searching, tied pink plastic tape around a palm tree and walked down the block to probe more ruins.

Most of Fort Myers Beach, a town on Estero Island that swells to four times its year-round population of 5,600 during snowbird and tourist season, was razed when Ian crashed ashore packing 150 mph winds.

Although Ian made first landfall at Cayo Costa and hit the mainland south of Punta Gorda, both just to the north, Gov. Ron DeSantis referred to Fort Myers Beach as “ground zero” because of the graphically surreal damage and potential loss of life.

The death toll from Ian, which flooded not only Florida’s Gulf Coast communities but rural DeSoto County and the Orlando area, rose on Friday to 50 across eight counties, according to the state’s emergency manager. It’s expected to rise as crews continue search efforts up and down the coast. 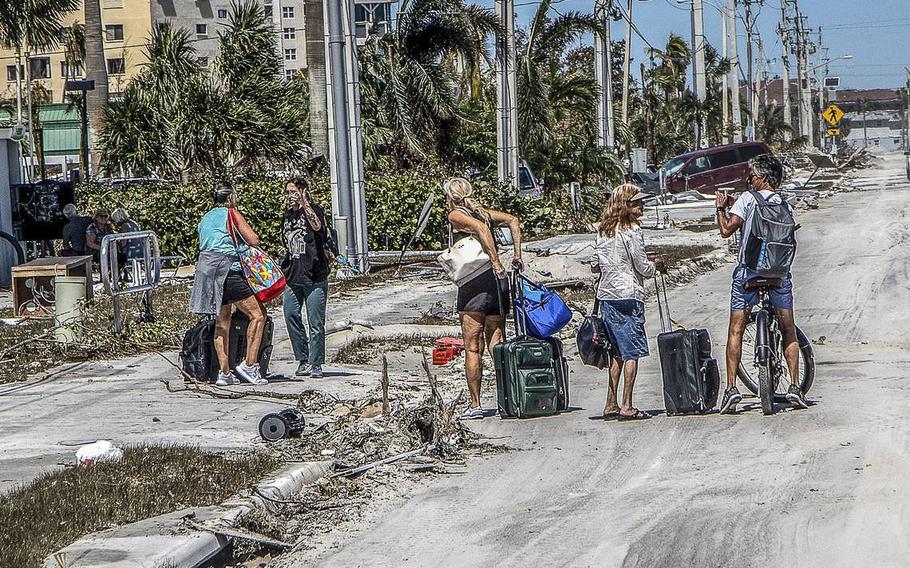 Lee County Sheriff Carmine Marceno announced 16 storm-related deaths. But thousands remained unaccounted for, the airborne rescue operation on Sanibel and Captiva islands was accelerating, and President Joe Biden warned that Ian could be Florida’s deadliest hurricane ever. The number of drowned victims may not be apparent for days.

In Fort Myers Beach, there were multiple eyewitness accounts of horrifying fates.

”We’ve seen bodies everywhere,” said John Galatro, who rode out the storm in the Leonardo Arms condo. “We counted 10 people in our building who died trying to climb to the roof during the height of the surge. That water was raging and swept some away. I personally covered one with a blanket. We made ‘Deceased’ signs so the helicopters could see them.”

Galatro, his girlfriend and his daughter were resting with a tearful woman from their condo under the roof of a hotel. They were pushing luggage carts filled with their belongings toward the Matanzas Pass bridge to the mainland.

”Everyone on this island is going to need a lot of therapy,” he said. “We rescued an old couple who had to tread water for hours. We pulled them out of a flooded laundromat where they said they were holding onto whatever they could to keep afloat.”

Pastor Forrest Critser wept as he recounted what happened to his church and his neighbors.

”We found a dead lady with her two dogs by her side. They were dead, too,” he said. “The paramedics found a dead couple. I’m sure more are going to turn up under all this debris and on the other islands.”

Critser and his co-pastor son Kevin Shawn said their Beach Baptist Church was “totaled.” Two white crosses were intact but the interior was a mess. Also destroyed, the adjacent food pantry that provided 1,200 meals per week and a 62-bed retreat. And Critser’s home.

“My house is completely gone,” he said, breaking into tears. He was wearing a T-shirt that said ‘Blessed and Highly Caffeinated.’ “See these stakes and concrete slab? That’s my 3-bedroom house. See that bunch of sticks down the street? That’s my house. I’ve got nothing but the clothes I’m wearing.”

Yet Critser was most concerned about “my people” — his ministry for the town’s homeless people. He was trying to find transportation for three dozen to a downtown Fort Myers shelter. 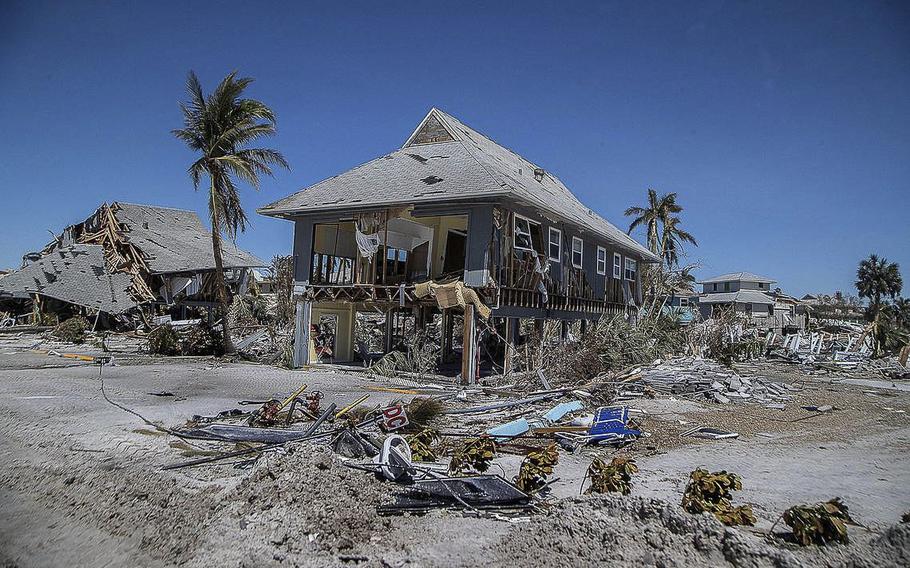 ‘I’m going to have nightmares’

”I’m going to have nightmares,” Stohr said. He worked at the Tropical Grill. His girlfriend MacKenzie Hood worked at the Lighthouse resort, where they and other employees took refuge on the second floor during the storm.

”The storm was so nasty and the water was so high we’re lucky we survived,” Hood said. “It was scary. We drank a lot.”

Along the town’s main drag, Estero Boulevard, dazed residents trudged through slippery gray muck, dragging suitcases or pushing shopping carts full of whatever they could salvage. They were making an exodus — police closed off the island to visitors and cars — and weren’t sure when or if they were coming back to their slice of heaven known for its sunsets, seashells and Rum Runners. Business owners assessed damage and debated whether to rebuild. No one ventured a guess as to when power, water and cell service would be restored.

Scattered around the apocalyptic landscape was the flotsam of their everyday lives turned upside down — ovens, air conditioners, stairways to nowhere, beer kegs, mattresses, toilets, a Peloton, a wedding album, a lawnmower, cars with shattered windshields, lonely sandals missing their mates.

All that remains of the popular pier are skeletal slats and pilings.

Most stunning was the sight of houses washed inland. Like a supersized tide driven by Category 4 winds, the water ripped buildings off their foundations and carried them 50, 100 even 300 yards as they were moved around like Monopoly pieces. Picturesque old wood-frame cottages were particularly vulnerable.

”The destructive power of the surge made this hurricane equivalent to 200 mph winds,” said Miami Mayor Francis Suarez, who was in Fort Myers Beach on Friday. “How would Miami deal with 10 feet of storm surge? Is any city on the planet capable of dealing with it? When you consider the loss of life and the billions of dollars at stake, our priority needs to be investing in methods for blunting storm surge.”

The disorienting displacement complicates the job of rescuers. Addresses and maps become useless. They’re not only searching for people but for remnants of the places where those people lived.

”The difference between flooding is that during surge, structures slam into each other,” said Iggy Carroll, executive director of Miami’s Fire Rescue department, describing the bowling ball effect of storm surge. “At the location where we’d expect to see a house there is no house. We have to follow the debris path to find it. Conversely, here’s a house that wasn’t here before.”

Miami Lt. Peter Darley said first responders have to act as detectives when time is of the essence.

”We received a head’s up that a neighbor was missing. Fourth house down on Anchorage. But there is no house here. They told us to look for a blue roof. But there is no blue roof here. We found it on the next block,” he said. “We were looking for two bodies on Andre-Mar Boulevard. We had to hunt for clues — the color of the paint, a house number, the make of the car that used to be in the driveway. We found them 200 yards from where the house had stood.” 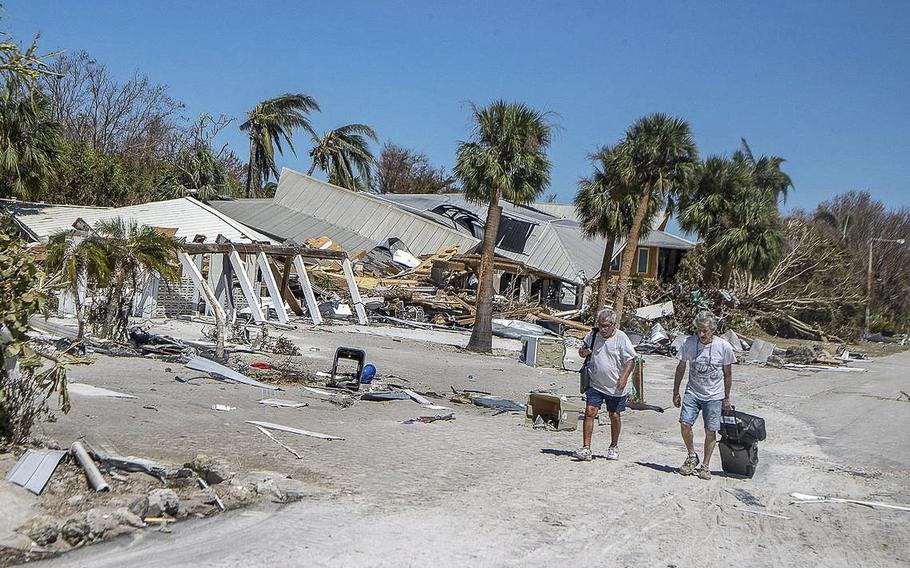 During their first 24 hours in the area, Florida Task Force 2 members — among 1,000 rescue personnel dispatched across the state — rescued 60 people. They will transition to the next phase of their operation, which entails rigorous searches.

”First we’re doing a primary search of rubble and conditions, and we’re looking for people who are in distress and need help,” Lt. Jennifer Arguello said. “That gives us a game plan on where to concentrate searches for human remains. We rely a lot on neighbors, friends and relatives to track who is where.”

Searchers were at Surfside

Carroll was driving one of the city’s jacked-up SUVs down Estero Boulevard, navigating past a growing fleet of ambulances, earth movers and dump trucks, when he was stopped by an 84-year-old man who was trying to walk off the island but had become exhausted. Carroll called a ride for him.

Later, Cigar Hut owner Steven Light flagged Carroll down, and Carroll drove him to his girlfriend’s apartment on Lovers’ Key, where they were reunited. He also made sure an elderly man in a wheelchair received treatment and touched base with paramedics who rescued four immobile people from the Pointe Estero condo.

Back with Squad 6 on Anchorage Drive, Carroll, Darley and Arguello checked on Emiliano “Emmy” Crespo, who was splattered with mud and wore bandages on his legs. He was relieved to see the Miami crew.

”I survived Andrew, too, from Perrine,” Crespo said of the 1992 hurricane that devastated south Miami-Dade County. “Half my house was destroyed and my car was found 13 blocks away. You’d think I’d have learned my lesson and evacuated.”

“The water’s what did it this time. I didn’t think the water would come that high,” he said, pointing to a 9-foot tall water line in his garage. “Andrew was a lot of wind and plain old rain. This was like a tidal wave.”

Brad Evans and wife Regiane are also complacent hurricane veterans who regretted not evacuating. Ian squatted over Southwest Florida and pounded it for hours.

”It’s the most frightening thing we’ve been through. We’ve done Category 5 whitewater rafting and it was way worse than that. It looked like the inside of a washing machine,” Evans said. “It came up to 8 or 9 feet very fast, peaked at 4:45 p.m. and receded within 90 minutes.

”We went through all the hurricanes when we lived in South Florida and we thought 3 to 4 feet of storm surge, yeah, yeah, we can handle that. We were wrong. This is what we’re going to get from now on with climate change.”

After their traumatic experience, Matthew Stohr and MacKenzie Hood remained shaken. They have mixed feelings about leaving the beloved island. They’ve heard nothing about their restaurant and hotel jobs, service jobs that are the lifeblood of the local economy. .

Stohr struggled to find the right words to describe nothingness.

Then he raised a fist.