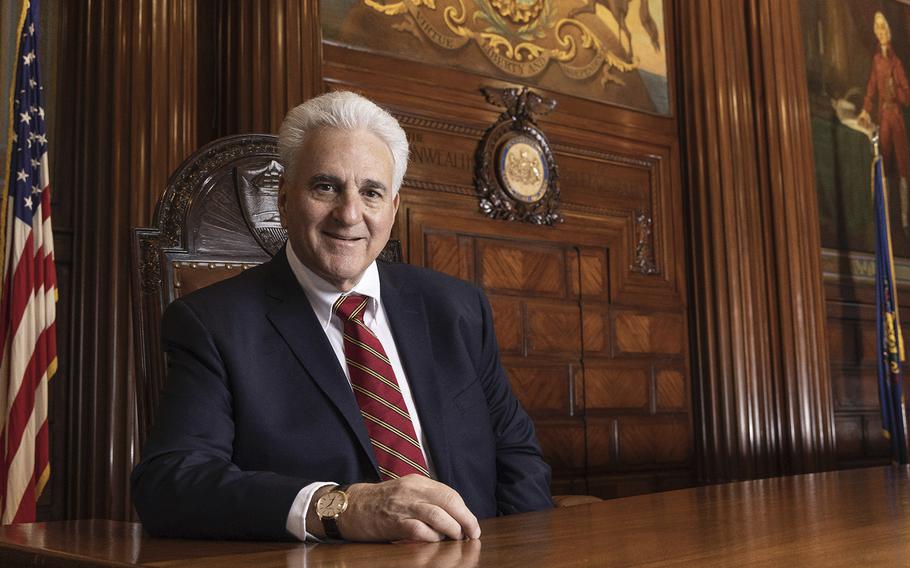 Max Baer, the chief justice of the Pennsylvania Supreme Court, has died at age 74 only months before he was set to retire. The court confirmed Saturday, Oct. 1, 2022, that Baer died overnight at his home near Pittsburgh. (Administrative office of Pennsylvania Courts)

(Tribune News Service) — Pennsylvania’s Supreme Court has been in the eye of the storm in recent years as it decided a series of hot-button issues that ranged from covid responses, reapportionment and election reform.

At its center was Chief Justice Max Baer.

Baer, 74, died Friday night at his home near Pittsburgh.

“This is a tremendous loss for the court and all of Pennsylvania,” said Justice Debra Todd, who as the longest tenured member of the court is poised to become its chief justice. “ Pennsylvania has lost a jurist who served the court and the citizens of the commonwealth with distinction. Chief Justice Baer was an influential and intellectual jurist whose unwavering focus was on administering fair and balanced justice.

“He was a tireless champion for children, devoted to protecting and providing for our youngest and most vulnerable citizens.”

Baer grew up in Dormont and attended high school at what was then called Linsly Military Academy in Wheeling, W.Va.

He earned his bachelor’s degree from the University of Pittsburgh in 1971 and his law degree from Duquesne University School of Law in 1975. According his biography on the state court’s website, Baer served as a deputy in the state Attorney General’s Office from 1975 to 1980 and then worked as a private practice lawyer until he was elected as an Allegheny County Common Pleas Court Judge in 1989. Baer was named the Family Court Division administrative judge in 1993.

He was elected to the state’s Supreme Court in 2003 and was sworn in as the high court’s chief justice at the start of 2021.

“He ran the Supreme Court with grace and with deference but did what was necessary to do to change the system,” Clark said.

“I’m just shocked,” Clark said. “I’m happy he got his kudos before he passed away.”

Pennsylvania Gov. Tom Wolf ordered the state’s flags be lowered until Baer’s internment, which has not been scheduled.

“I’m extremely saddened to learn that Chief Justice Baer passed away,” Wolf said. “He was a respected and esteemed jurist with decades of service to our courts and our commonwealth. I am grateful for his contributions and leadership in the Supreme Court.”

Wolf is expected to nominate a replacement for Baer that will require confirmation from two-thirds of the state Senate. Voters will elect a permanent replacement next year.

Democrats, including Baer, held a 5-2 majority on the court.

“I was saddened this morning to hear of Chief Justice Baer’s death,” Allegheny County Executive Rich Fitzgerald said in a statement released Saturday. “He had such a significant, positive impact on the judiciary, first as a Common Pleas Court judge, and then as a member of the Pennsylvania Supreme Court, and then as the Chief Justice. His loss will be greatly felt.”

Tributes to Baer came from both sides of the political aisle.

“On behalf of the Pennsylvania House Republican Caucus, I offer my deepest condolences and sympathies to the family, friends, colleagues and loved ones of Chief Justice Max Baer,” said state House Majority Leader Kerry Benninghoff, R- Centre County. “Of note, his admirable work in the area of foster care, adoption and child advocacy is something that has had a monumental impact on the lives of countless Pennsylvania children and made the dream of becoming a family a reality for many.”

“It has been a joy to call him a friend for the past 30 years as he has served Allegheny County and the entire commonwealth of Pennsylvania,” said state Sen. Jay Costa, the Senate minority leader. “A fellow Duquesne Law School graduate and lifelong yinzer, Justice Baer leaves an accomplished legacy of moral clarity, justice, and care for our democracy. I will miss him greatly and am holding his family in my prayers today.”