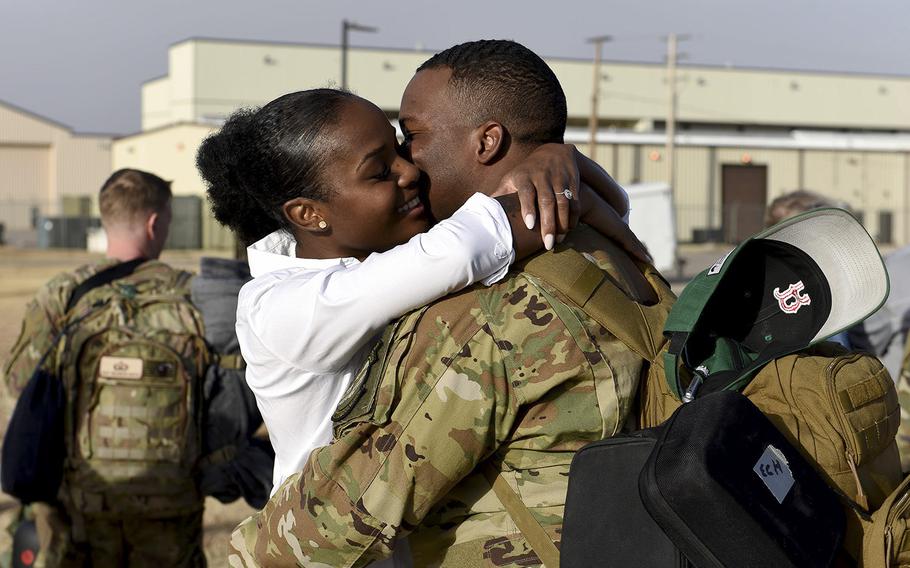 A U.S. airman hugs his spouse at Dyess Air Force Base, Texas, Jan. 18, 2019, after returning from a deployment. (Mercedes Porter/U.S. Air Force)

(Tribune News Service) — After being debated in Congress in one form or another since 2005, supporters say passage of the Military Spouse Hiring Act may happen this year, giving employers a new incentive to hire the spouses of active-duty service members, who face a higher jobless rate than the general population.

The legislation would provide tax incentives to employers who hire the spouses of members of the armed forces. Introduced in its current form this year with bipartisan support, the bill would amend the tax code to expand the Work Opportunity Tax Credit to include military spouses — including spouses in National Guard, Reserve and active-duty families.

This comes at a time when the nation is having a conversation about support of military families. Secretary of Defense Lloyd Austin this month announced new steps to support enlisted families who may be struggling at a time of high inflation.

“This is personal for me,” Austin said in a Sept. 22 memo. “I have seen firsthand how much our military families sacrifice to keep our force strong.”

It may well pass as part of an “expander’s bill,” expanding some 40 expiring tax credits, observers of Congress say. While not all of the credits enjoy bipartisan support, many do.

“The prospects are good,” said Jennifer Goodale, who is the Military Officers Association of America’s director of government relations for military family policy and spouse programs. “We’ve had good conversations with Ways and Means, which is the (House) committee of jurisdiction.”

The bill has 47 co-sponsors for its Senate version — the first time a Senate companion has ever existed for this bill — and nearly 250 in the House, Goodale said.

“If there is an extender’s bill, this could ride along with it,” she said.

“We’re working hard to build support for this legislation to pass,” Treacher said, adding that it will not be a “silver bullet.”

“It will be another useful tool in the toolkit to help bring that rate down,” he said.

Military families are uprooted on a regular basis, sometimes as often as every two to three years, for new duty assignments, Treacher and Goodale noted. It can be challenging to establish roots in a new community, meet a new state’s professional or licensing requirements and answer for gaps created in an employment resume as a result of frequent moves.

But a lack of affordable child care is a big part of the challenge, said Goodale, who became a military spouse herself after she served in the Marine Corps.

“To support the men and women who work at Wright-Patt is to support their spouses who work in our communities,” he said in a statement. “I am proud to cosponsor this bipartisan legislation which will encourage businesses in the Miami Valley and across the country to seek out and hire active duty military spouses. Employing spouses of those individuals on active duty promotes stability, strengthens military readiness and grows the local economy.”

“My mother was a military spouse, and I am keenly aware of challenges facing partners of active-duty servicemembers who often have to relocate their families long distances,” said Rep. Don Beyer, D- Va., another sponsor. “This bipartisan legislation would use the tax code to help overcome hurdles to employment that disproportionately affect military spouses, and show military families that their service to our country is valued”

Why has it taken so long to pass? Goodale said military spouses are a a relatively small, and ever-changing population, making it challenging to build a stable source of support. If a bill does not pass in one Congress, sometimes that means educating new House members on its merits, Goodale said.

If passage doesn’t happen in this Congress, there’s a chance it could happen in the new year, even if the House flips to a new Republican majority, Goodale said. Supporters will work to reintroduce it right away, she said.