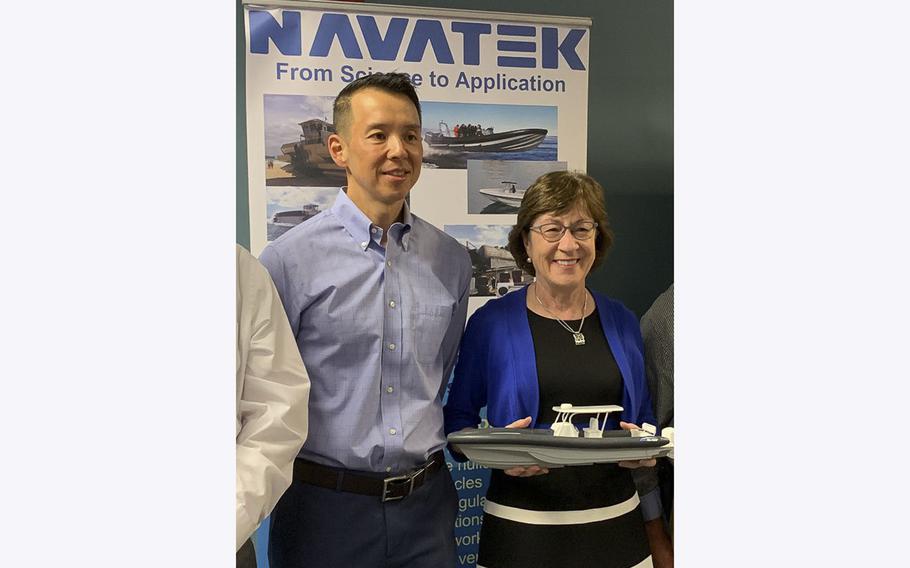 Sen. Susan Collins holds a miniature ship as she stands beside Martin Kao, the then-CEO of the engineering firm Navatek. Kao has pleaded guilty to illegally funneling more than $200,000 to Collins’ 2020 reelection campaign. (Facebook)

(Tribune News Service) — The former chief executive of a Hawaii-based defense firm has pleaded guilty to illegally funneling more than $200,000 to U.S. Sen. Susan Collins’ campaign and a political action committee that supported her 2020 reelection bid.

Martin Kao, head of the engineering firm Navatek, was charged Feb. 22 with violating federal laws prohibiting defense contractors from making such contributions. Prosecutors alleged he and two other company executives had engaged in a conspiracy to funnel the money through family members and a shell company in 2019. On Tuesday, he pleaded guilty to conspiracy, funneling contributions, and two counts of making false statements to authorities.

Collins, a Maine Republican who was and remains a senior member of the Defense Appropriations subcommittee, has said she knew nothing about the illegal donations — $52,000 to her campaign and $150,000 to the 1820 PAC — which were made shortly after Collins helped the firm land an $8 million contract with the U.S. Navy’s Office of Naval Research to build experimental hulls and hybrid-electric propulsion systems in Maine.

When Kao was indicted in February, Collins’ office issued a statement saying “the campaign had absolutely no knowledge of any of the allegations against Mr. Kao or his associates until a search warrant was reported in the press” in May 2021. There is no indication she or her campaign broke any laws or were ever subjects in the federal criminal investigation.

“There have been no allegations of wrongdoing by the Collins for Senator campaign, and the campaign has cooperated fully with the FBI throughout this investigation,” the statement said. “The campaign divested itself of all the contributions possibly associated with Mr. Kao and his associates. Both the campaign’s website and donor forms stated clearly the very basic law that donors cannot make a contribution in another person’s name.”

In August 2019, the senator joined Kao for a news conference in Portland to announce the $8 million award, noting that she had “strongly advocated for the funding” on the Defense Appropriations subcommittee. Kao thanked Collins for her support, which allowed the firm to build experimental hulls in conjunction with Belfast-based Front Street Shipyards. The firm had 22 employees at its Portland office at the time and said it would be adding 28 more as a result of the contract.

Kao and his wife had already maxed out their allowable donations to Collins’ campaign — $5,600 each — but 11 days after the Navy contract was announced six other individuals also made $5,600 contributions, all using money given to them by Kao for this purpose, Kao affirmed in his guilty plea. These contributions violated federal campaign finance law.

The following month, Kao sent an email to the Collins campaign’s director of finance from his company email account stating, “We are here to help anyway we can ... financially or whatever,” according to court documents. “Just want to let you know, you’re going to see two more max out donation of $5,600/each come in late today,” he added. Those contributions turned out to be from two company executives and made with the company’s corporate credit card.

Kao and two other executives also created a shell company — the Society of Young Women Scientists and Engineers — which they used to funnel an illegal $150,000 contribution from Navatek to the 1820 PAC, a so-called super PAC that supported Collins’ reelection effort but operates independently and is legally prohibited from coordinating with her campaign. At the time, Collins was preparing for a tight reelection fight, ultimately triumphing over Democratic nominee Sara Gideon.

Navatek has since renamed itself the Martin Defense Group. On Sept. 9, Kao also pleaded guilty to defrauding the government of over $12 million in federal CARES Act funds intended for pandemic relief. He is scheduled to be sentenced for this crime on Jan. 19, 2023, and for the campaign finance violations on Feb. 9.

The suspicious contributions were first flagged by a public interest nonprofit, the Campaign Legal Center, and much of the conspiracy was exposed by the Hawaii-based news organization Honolulu Civil Beat.