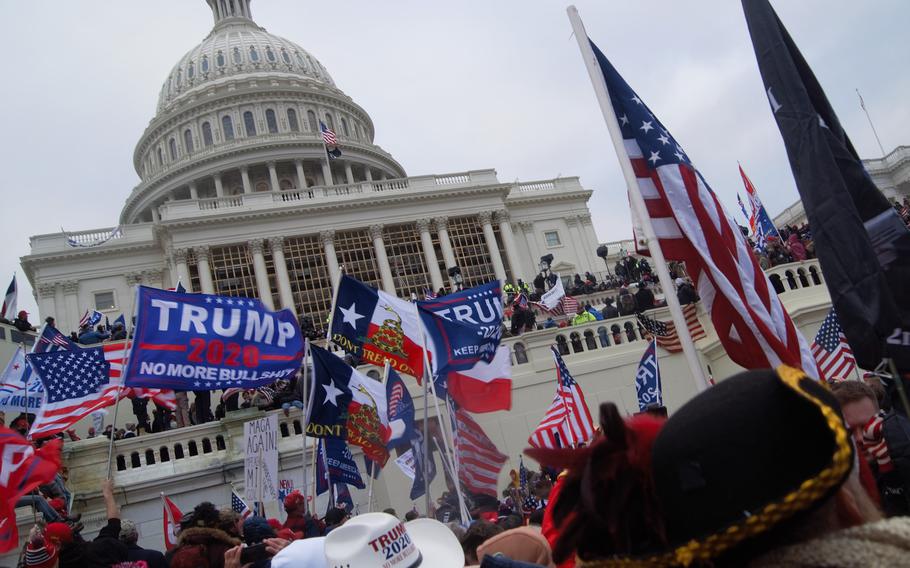 A former military police officer from Texas — who excitedly planned for physical violence at the U.S. Capitol on Jan. 6, 2021, engaged in hand-to-hand battle with police there for nearly 90 minutes, then lied about being in Washington when questioned by the FBI — was sentenced Wednesday to slightly more than four years in prison. (Wikimedia Commons)

A former military police officer from Texas — who excitedly planned for physical violence at the U.S. Capitol on Jan. 6, 2021, engaged in hand-to-hand battle with police there for nearly 90 minutes, then lied about being in Washington when questioned by the FBI — was sentenced Wednesday to slightly more than four years in prison.

Federal prosecutors sought eight years in prison for Lucas Denney, 45, of Mansfield, Tex., arguing that Denney’s helmet, tactical vest and hardened gloves qualified as body armor and therefore should increase his sentencing range by 30 months. But U.S. District Judge Randolph Moss rejected the 30-month enhancement and then issued a sentence of 52 months. That was below the recommended range of 57 to 71 months established by the federal guidelines, which are advisory.

Starting in December 2020, Denney began recruiting members of a newly formed militant group, Patriot Boys of North Texas, to join him in D.C. for the “Stop the Steal” rally — where President Donald Trump whipped supporters into a frenzy with false claims of election fraud — and also to raise funds for weapons, gear and travel, prosecutors said in their sentencing brief. In Facebook messages, Denney wrote: “We are linking up with thousands of Proud Boys and other militia that will be there. This is going to be huge. And it’s going to be a fight.”

On Jan. 5, 2021, prosecutors said Denney engaged in fighting at Black Lives Matter Plaza in D.C. and posted video of it, saying, “That’s what happens when you get into that warrior mode.” The next day, surveillance video captured Denney and another man from Texas trying to pull barricades away from police and later spraying a substance at Capitol Police officers, prosecutors said.

Denney was later captured on video on the west side of the Capitol, first picking up a long PVC pole that he swung at a D.C. police sergeant, then grabbing a large tube and throwing it at a line of police officers, prosecutors said.

About 30 minutes later, Denney joined the assault on the West Terrace tunnel, leading the mob as it pushed its way into the Capitol, and then swung at D.C. police officer Michael Fanone as Fanone was being dragged into the mob, the government alleges. Fanone suffered a heart attack as he was electrically shocked with a Taser by protesters.

When Denney returned to Texas, he posted on Facebook that “It was peaceful. The police even opened up the barricades to let people come closer.” Interviewed by the FBI in February 2021, Denney told agents he didn’t know anyone who had gone to the Capitol that day. Interviewed again in December, “Denney falsely stated that he did not see any fights or riots at the Capitol building and that he could not remember striking or ‘laying a finger’ on anyone,” the prosecution brief states.

Denney was arrested and in March pleaded guilty to assaulting law enforcement officers with a dangerous weapon. At Denney’s first sentencing hearing in July, the D.C. police sergeant who suffered injuries from the PVC pipe choked up as he recounted the bruises from the pipe and the chemical burns from bear spray in his face. He said his body burned for a week after the riot.

“It’s clear to me he doesn’t understand his actions that day . . . and he needs some serious self-reflection,” said the sergeant, who testified without giving his name. Denney filed an affidavit with the court that minimized his conduct, said he couldn’t remember certain actions and said the FBI asked him imprecise questions.

Fanone also testified in July, telling Moss: “I was dragged from the front of the police line, pulled into the crowd, and violently beaten and electrocuted with a stun gun. I was eventually dragged to the police line by demonstrators who intervened on my behalf. It is likely that without the intervention of those demonstrators, I would have lost my life.”

The judge did not impose sentence that day because Denney’s sentencing memo conflicted with the facts offered by prosecutors. But Moss said the officers’ statements would “remain with me not just in sentencing but through my remaining days on earth.”