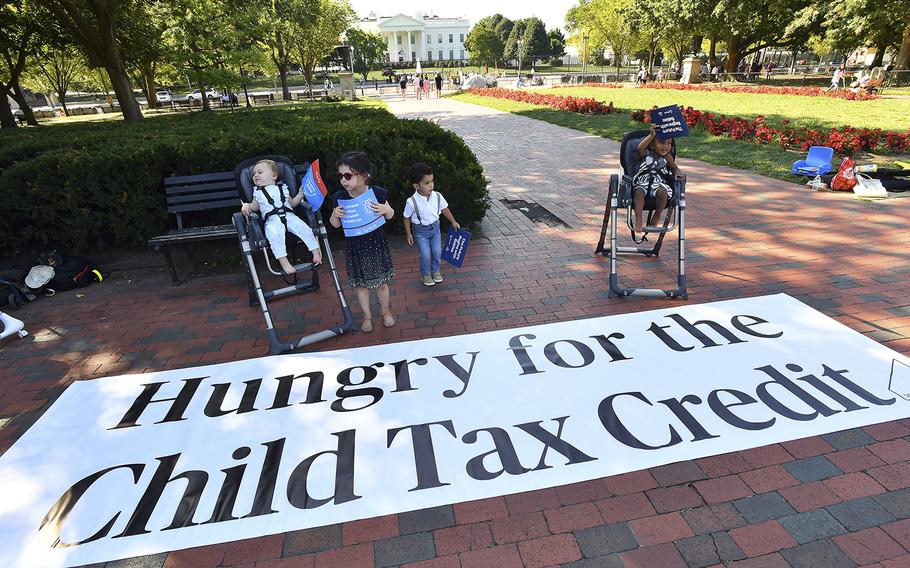 Parents and caregivers with the Economic Security Project gather outside the White House to advocate for the Child Tax Credit in advance of the White House Conference on Hunger, Nutrition, and Health on September 20, 2022, in Washington, DC. (Larry French/Getty Images for SKDK/TNS)

Hunger is spreading among Americans with steady but low-paying jobs, reversing President Joe Biden's early success in cutting food scarcity by nearly a third and threatening to worsen as the country teeters on the brink of recession.

Nursing aides, maintenance workers, store clerks and roofers are among the Americans already turning to food banks for help, the consequence of political opposition to the administration's efforts to extend temporary pandemic benefits and a spike in inflation that has been especially hard on families near the precipice of poverty.

The situation threatens to worsen as the Federal Reserve raises interest rates and the economy slows, with private forecasters now predicting a 50% chance of recession over the next 12 months.

This is the economic backdrop for Biden's high-profile White House event Wednesday committing the nation to ending hunger by 2030. For many Americans, especially those struggling for the first time to make ends meet, that goal seems more elusive than ever.

Mary McManus, a 44-year-old discount-store cashier who lives outside Scranton in small-town Jessup, Pennsylvania, said she has been kept awake at night choosing between making utility payments, buying gas for the car and purchasing groceries. She and her husband, a tree trimmer, fell behind on utility payments this year after they stopped receiving monthly child tax-credit payments that expired in December and inflation swelled the cost of household essentials, she said.

"I worry. I think, 'Oh my goodness, they're going to shut off my utilities,'" said McManus, who has been struggling even with some assistance from an electronic grocery benefit for families whose children qualify for reduced-price school lunches.

People like McManus and her family will be among the most vulnerable if the economy tips into recession, said Alix Gould-Werth, director of family economic security policy at the Washington Center for Equitable Growth.

"It's going to be the families most hit by inflation that are most likely to lose their jobs and experience hardship," Gould-Werth said.

The threat is looming as Biden gathers anti-hunger advocates, state and local officials and food company representatives for the White House Conference on Hunger, reprising a 1969 forum Richard Nixon convened that sparked major expansions of the federal food stamp and school lunch programs and authorization of the Women, Infants and Children program.

In announcing the event, Biden said he was committed "to taking bold steps that are going to help end hunger" and would lay out a plan to achieve the goal. That plan includes restoring the now-expired expanded child tax credit and raising the minimum wage — proposals the current Congress wouldn't pass — and expansions of food assistance, including free school lunches for more children, White House officials said.

As a presidential candidate, Biden spoke passionately about his horror at seeing the long lines of cars at food banks during the early days of the pandemic, when many previously secure middle-class families suddenly confronted financial hardship.

In office, he acted quickly. His $1.9 trillion COVID relief package stimulated the economy, bolstered the middle class and temporarily strengthened safety-net programs for the poor. That included $1,400 stimulus payments, a temporary expanded child tax credit of up to $300 per child paid monthly to parents, universal free school lunches and other food-aid increases.

Hunger in America plunged. At the start of Biden's term in late January 2021, 24.1 million adults didn't have enough to eat the prior week; by early August of that year, the number dropped by nearly a third, to 16.7 million, according to Census surveys. The improvement for families with children was even more dramatic, thanks to the expanded child tax credit.

But that would be the extent of progress.

As the temporary pandemic relief measures started expiring, inflation surged to the highest levels in four decades. Though the economy added jobs and employers gave raises, inflation ate away even above-average pay increases.

Costs of necessities that account for large parts of lower-income Americans' spending have risen most rapidly. Headlines showed annual inflation in August at 8.3%, but groceries were up 13.5%, electricity 16.2%, regular gasoline 23.5% and natural gas utility rates 38.4%.

And the lines at food banks started getting longer again.

At Murphy's Giving Market, a local food bank just outside Philadelphia in Upper Darby, Pennsylvania, about 250 people have been coming for the weekly food distributions this month, up from 110 a year ago, said Desiree La Marr-Murphy, the founder.

"We have many new faces, new families are coming," La Marr-Murphy said.

More than half of the non-elderly people who line up as early as 5:30 am have jobs but still can't make ends meet, she said.

Some Democrats as well as Republicans had criticized the scale of Biden's pandemic relief package as likely to add to inflationary pressures. Most prominent among them was Larry Summers, Bill Clinton's Treasury secretary and Barack Obama's chief economic adviser, who also warned that the generous COVID relief risked undercutting support for Biden's long-term economic agenda.

Biden's ambitions to continue the expanded child tax credits and other poverty protections did flounder. West Virginia Senator Joe Manchin emerged as the key opponent within the Democratic party, arguing the aid would be too expensive and any child tax credits should be tied to work. Rising inflation, worsening after Russia's Vladimir Putin invaded Ukraine, stiffened the opposition.

After nearly a year of deadlock, Biden and his Democratic allies abandoned anti-poverty measures including the expanded child-tax credit to gain Manchin's support for a whittled-down economic plan focused on lowering health and prescription costs and combating climate change.

"Within the bounds of what they think is good stewardship for government and their legal authority, they've maximized food aid," said Geri Henchy, director of nutrition policy at the Food Research and Action Center, a leading anti-hunger advocacy group. "They've done the best they could."

But other temporary food assistance left over from the pandemic is winding down, including universal free school lunches, potentially creating obstacles for families that will have to re-qualify.

For families who have never previously struggled to cover the necessities, the anxiety is high. Outside Scranton, McManus' husband received a raise, but it wasn't enough to make up for price hikes. At one point, they cut back on fruits and vegetables to stretch the budget even as they helped an adult child pay for her groceries.