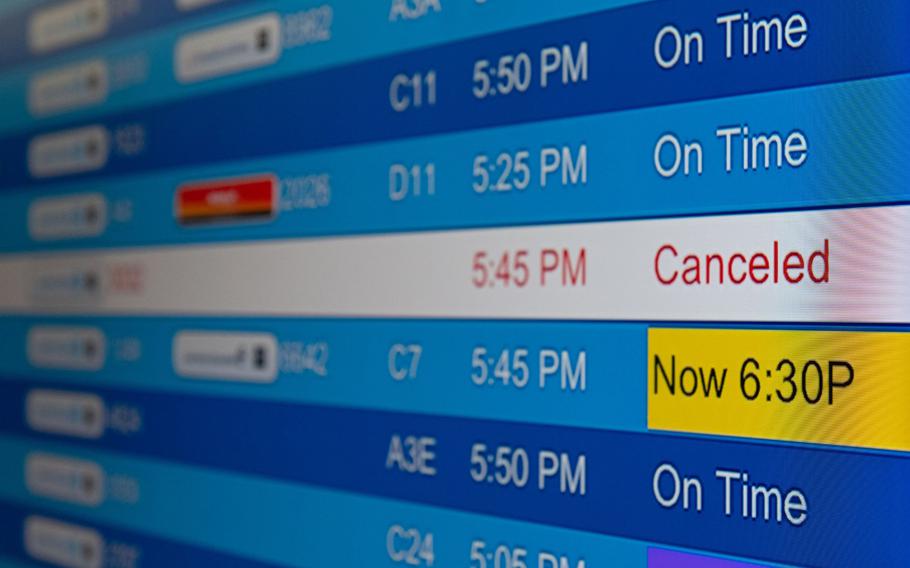 Canceled flights are seen on an electronic board at Washington Dulles International Airport in Dulles, Va., on Dec. 24, 2021. (Eric Lee/Bloomberg)

WASHINGTON — President Joe Biden announced a proposal Monday that would require airlines and ticket sales websites to disclose additional fees up front, aiming to add a dose of transparency to the process of booking travel.

The disclosures would cover any fees for passengers to sit with their children, change or cancel a flight, and bring checked or carry-on bags, according to the Department of Transportation. The fees would be required to be displayed the first time a ticket price is shown.

“You should know the full cost of your ticket right when you’re comparison shopping,” Biden said.

The announcement came at a meeting of Biden’s Competition Council at the White House, where he called on federal agencies to pursue similar measures to tackle hidden fees in other sectors of the economy. The new airline proposal is among several consumer-friendly measures the Transportation Department has proposed in recent months to regulate carriers amid a rough patch for air travelers.

“This new proposed rule would require airlines to be transparent with customers about the fees they charge, which will help travelers make informed decisions and save money,” Transportation Secretary Pete Buttigieg said in a statement.

The public will have 60 days to comment on the proposal before it can be finalized, although putting the rules in place could take months.

Consumer groups and an association that represents travel booking sites such as Travelocity and Kayak said more transparency would be a welcome change. Stewart Alvarez, interim president and chief executive of the Travel Technology Association, said the disclosures would help customers compare prices, especially those who travel infrequently.

“The challenge for the consumer has been the lack of transparency,” Alvarez said.

Airlines for America, an association that represents the biggest carriers, did not address the specifics of the proposal but said its members are “fierce competitors” committed to transparency.

Bag fees, in particular, are big sources of revenue for airlines — and have grown in recent years. Fourteen major airlines collected $5.3 billion in bag fees last year, according to the Bureau of Transportation Statistics.

Under current rules, airlines are required to disclose what they charge for bags, but not at the point where fares are first displayed to prospective passengers. In the proposed rules, the Transportation Department concluded the existing system is insufficient.

“Consumers are often diverted to complex charts that are confusing, prolong the consumer’s process of evaluating itineraries and fares for purchase, and may ultimately not be instructive for many consumers in determining the bag fee that would apply to them,” the agency wrote in the proposal.

Ensuring that families with young children can sit together also has been a priority for consumer advocates, coming as the Transportation Department has urged airlines not to charge such fees. The new proposal requires that if carriers do charge for an adult and child to sit together, airlines must disclose the cost and allow it to be paid when a ticket is sold to avoid subsequent changes to the fees.

But Bill McGee, a senior fellow at the American Economic Liberties Project and a veteran consumer advocate, said he was disappointed the department didn’t propose banning family-seating fees.

“This is absurd that we’re even having to talk about it,” he said. “They have been dancing around this issue across three administrations now.”

The department has said it is reviewing airlines’ approaches to family seating and could still step in to prohibit the fees.

The new proposal comes after the department has proposed to clarify the definitions of canceled and significantly delayed flights that are eligible for refunds and proposed requiring airlines to issue vouchers to passengers who choose not to travel because they have COVID-19 or another serious communicable disease.

The proposed vouchers rule has received more than 4,000 comments from the public, many from regular travelers urging the department to impose new protections after a bumpy pandemic recovery that has seen a flood of flight cancellations and delays.

A separate proposal would require airlines to give refunds for WiFi fees if in-flight internet isn’t working and for bag fees when bags are delivered late. That proposal points to the lengthy review period required: the rule was proposed in July 2021 and has yet to be put into force.

The airline industry is dominated by four major carriers, and the Transportation Department will help review a proposed merger between JetBlue Airways and Spirit Airlines that could further consolidate the industry. The Justice Department is challenging an alliance between JetBlue and American Airlines, with a trial set to begin this week in federal court in Boston.