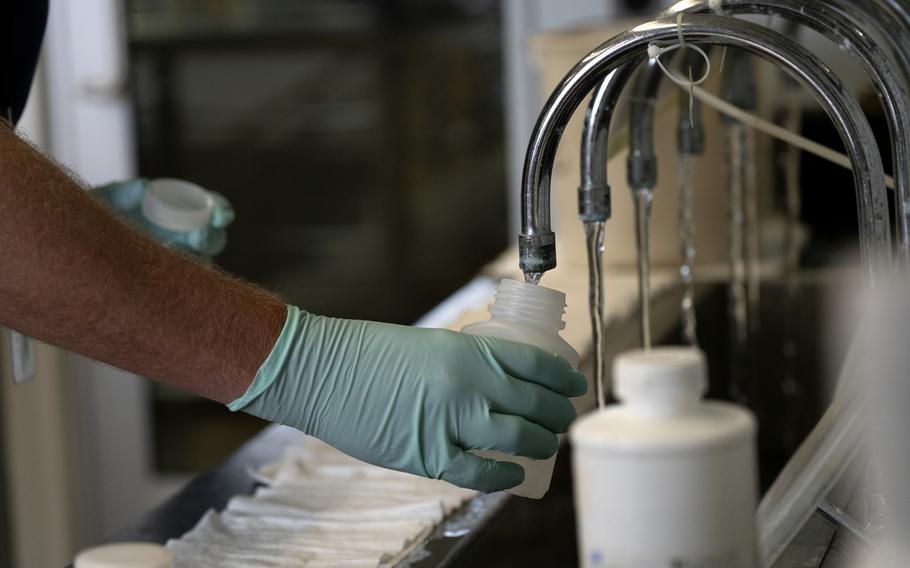 Geologist Ryan Bennett with the Illinois Environmental Protection Agency collects samples of treated Lake Michigan water in a laboratory at the water treatment plant in Wilmette, Ill., on July 3, 2021. An analysis of the samples detected a pair of toxic PFA chemicals at levels up to 600 times higher than the U.S. EPA's latest health advisory. (Erin Hooley, Chicago Tribune/TNS)

(Tribune News Service) — “Forever chemicals” are everywhere. The thousands of chemicals in the group known as perfluoroalkyl and polyfluoroalkyl substances, or PFAS, are found in cookware, packaging, cosmetics, clothing, carpet, electronics, firefighting foam and many other products.

The chemicals, which do not naturally break down, are so widespread that they’re found in the blood of 97% of Americans. Research shows that some PFAS compounds may decrease fertility, cause metabolic disorders, damage the immune system and increase the risk of cancer.

While states await regulations from the federal Environmental Protection Agency, rising awareness in recent years has prompted more than two dozen states to take the initiative to protect their residents’ health, in many cases through bipartisan legislation.

Some have banned the use of PFAS in certain consumer products. Others have issued stronger water quality standards or empowered state agencies to speed up regulations. Many are pursuing cleanup and remediation efforts, with states suing polluters for compensation ranging from tens of millions to nearly a billion dollars. And as more agencies and lawmakers become interested and begin testing for PFAS, experts say, more changes will come.

“The interest and action is just increasing,” said Sarah Doll, national director of Safer States, an alliance of environmental health groups focused on toxic chemicals. “More governmental bodies are looking and finding PFAS in water, sludge and the air. It’s burgeoning, and I absolutely anticipate it’s going to be all over 2023 policy sessions.”

“I have heard from legislators that testing has been a driving force for them,” said Mara Herman, environmental health manager with the National Caucus of Environmental Legislators, a forum for state lawmakers. “It’s being found in so many places, it’s not really an urban issue or a rural issue.”

“State by state is just absolutely ridiculous,” said Laurene Allen, co-founder of Merrimack Citizens for Clean Water, a New Hampshire group that has pushed the state to act on PFAS. “The progress you have shouldn’t be determined by your ZIP code.”

The EPA has proposed a rule to regulate two common PFAS chemicals under the Superfund law, but the agency hasn’t yet solicited public comment, which is required before the rule can go into effect.

Industry advocates, meanwhile, are lobbying on the federal level and in statehouses, arguing that attempts to regulate PFAS broadly could end up banning harmless chemicals that are crucial for important products and industries. PFAS compounds were long seen as a chemistry “miracle” due to properties that made them nonstick, stain-repellent, waterproof or fire-resistant.

“All PFAS are not the same, and they should not be regulated the same way,” the American Chemistry Council said in a statement sent by Tom Flanagin, senior director of product communications. “The most problematic pieces of legislation include inappropriate and overly broad definitions of PFAS that pull in many potentially unintended substances and products.”

Flanagin’s email cited a category of fluoropolymers used in renewable energy, health care, electronics and other industries as critical to many products while carrying a low safety risk.

Lawmakers in several states point to Maine’s 2021 passage of a law banning PFAS in all new products as a landmark moment.

The measure, which will take effect in 2030, bans any intentionally added PFAS, but allows for exceptions in products that are essential for health, safety or the functioning of society and don’t yet have a PFAS-free alternative.

“I was really concerned when I learned that PFAS is in virtually everything,” said state Rep. Lori Gramlich, the Democrat who sponsored the ban. “As I became more aware of how pervasive this problem was, I thought, ‘We’ve got to do something.’”

Few, if any states, have passed a PFAS ban as sweeping as Maine’s, but many have enacted laws targeting PFAS in food packaging, cosmetics, firefighting foam or textiles. Colorado passed a law earlier this year covering many products, while also ending its use in oil and gas production. State Rep. Mary Bradfield, a Republican who co-sponsored the bill, said she was moved to act as three water districts in her community struggled with PFAS contamination from nearby Peterson Air Force Base.

“PFAS chemicals are showing up in alarming amounts,” Bradfield said. “In certain concentrations, it can be very detrimental to health. My bill targets those products where there is a viable substitution for PFAS.”

Bradfield said other lawmakers wanted to pursue an economy-wide ban as broad as Maine’s, but she felt the targeted approach — which includes carpets and rugs, food packaging and children’s products — was more achievable.

In Hawaii, legislators passed a ban on PFAS in food packaging and firefighting foam earlier this year. State Rep. Nicole Lowen, a Democrat who co-sponsored the bill, said it was backed by research that showed alternative products already exist on the market, adding that the “writing is on the wall” for other PFAS categories.

“We felt like that would be the politically easiest thing to move forward,” she said. “From everything I’ve learned, unless there’s some need that cannot be replaced by anything else we have, these need to be phased out from use, period.”

Meanwhile, California passed laws this year to ban PFAS in cosmetics and textiles, while requiring companies to report data on other products containing PFAS.

Some lawmakers have focused their efforts on empowering state regulators, rather than targeting specific products.

In Washington, legislators passed a law earlier this year that will allow the state Department of Ecology to issue PFAS regulations within three years, instead of the 2030 timeline under the previous regulatory structure. That agency, which will have the authority to issue bans on PFAS in certain products, is expected to act by 2025, giving Washington the fastest timeline in the nation for phasing out PFAS.

“It’s the government’s job to protect people,” said state Rep. Liz Berry, a Democrat who sponsored the bill. “(The agency) has done a lot of the homework already. It’s just a matter of pulling the trigger.”

In some states, agency officials have led the response to PFAS contamination. In Michigan, for example, regulators crafted rules over the past several years for levels of some PFAS compounds in drinking water, groundwater and surface water. The state also brought together seven state agencies to form the Michigan PFAS Action Response Team, known as MPART, which serves as a coordinating group for testing, cleanup and public education efforts. The state has conducted extensive testing to identify contaminated sites.

“The biggest threat to public health has been around water quality,” said Abigail Hendershott, MPART’s executive director. “If we’ve got a source [of contamination], we’re going to find it in groundwater, so that’s the easiest way to define and start those compliance actions.”

Now that it has a better handle on testing and regulating water, the state may turn its attention to consumer products, she said.

Banning products and setting regulations may help prevent future contamination. But states still have much work ahead to address the forever chemicals found in their water, soil and residents.

Earlier this year, Florida legislators passed a bill requiring the state’s Department of Environmental Protection to establish rules by 2025 for target cleanup levels of PFAS if the EPA has not set a national standard by then. State Rep. Toby Overdorf, a Republican who co-sponsored the bill, said his community in Stuart, Florida, has had wells contaminated by PFAS. He noted the massive expense to clean up contaminated water systems.

“There will be state, federal and local funding that will need to come into play to address the problem,” he said. “We are going to be educating municipalities and letting them know they need to develop a plan to get a hold of this so they can deliver clean drinking water.”

New Hampshire set aside $25 million earlier this year to bolster a loan fund for PFAS remediation of public water systems and wastewater facilities. And lawmakers in Vermont gave residents the right to sue chemical companies for medical monitoring costs if they’ve been exposed to PFAS.

Meanwhile, 15 state attorneys general separately have sued companies alleged to be responsible for PFAS contamination, seeking damages for the harm caused by the pollution. Minnesota settled with 3M Company, which produced nonstick chemicals that polluted groundwater in the Twin Cities area, for $850 million in 2018. Delaware also reached a settlement, but the other lawsuits are still ongoing.

“It costs tens of millions of dollars to remediate PFAS from water and sewer facilities,” said Jon Groveman, policy and water program director at the research and advocacy group Vermont Natural Resources Council. “It’s either going to come from taxpayers or the citizens who pay water and sewer bills. AGs are saying, ‘No, that’s not fair.’”

Vermont recently passed a law creating a legal cause of action against manufacturers of hazardous materials who cause harm, without needing to prove negligence. Other states seeking to sue PFAS manufacturers may pursue similar legislation, Groveman said.

But some industry leaders think it’s unfair to hold PFAS manufacturers accountable for every instance of contamination.

“It’s not the person who manufactured it who caused the spill or leak, it’s the person on whose property the leak occurred,” said Scott Manley, executive vice president of Wisconsin Manufacturers & Commerce, a pro-business lobbying association.

Manley noted that his group has supported efforts to create a grant funding program to help local governments deal with PFAS hotspots.

But in some states, leaders would rather see polluters than taxpayers pay for cleanup.

“These chemicals are very difficult to clean up, and it’s very expensive,” said Minnesota state Rep. Ami Wazlawik, a Democrat who sponsored a bill that banned PFAS in food packaging. “The taxpayers of Minnesota are not responsible for putting these chemicals there.”