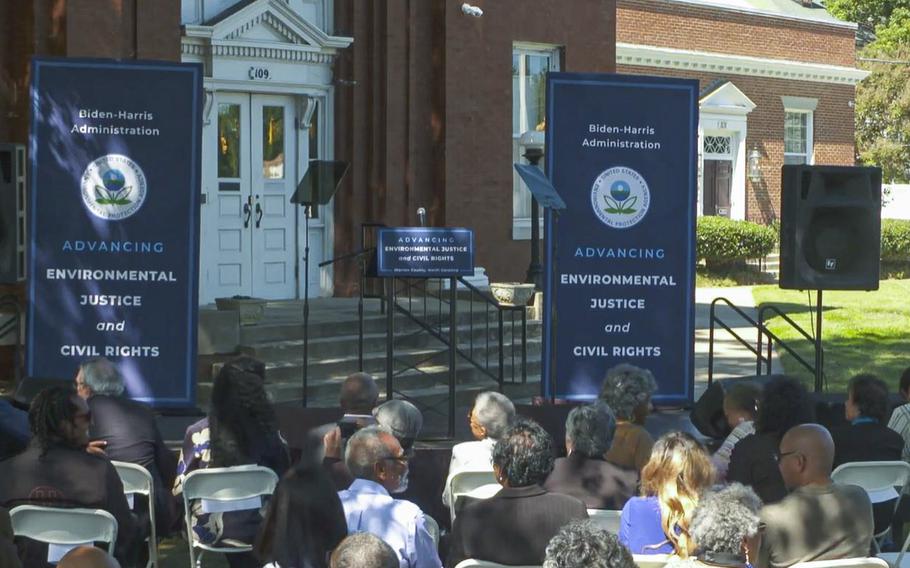 A video screen grab shows a gathering outside the EPA’s new Office of Environmental Justice and External Civil Rights. (Facebook)

WARREN COUNTY, N.C. — Forty years ago, Dollie Burwell was a young mother in this rural farming region, determined to fight North Carolina's decision to dump thousands of truckloads of contaminated soil nearby.

Fearing the site could sully groundwater and become a magnet for other toxic waste, Burwell and other local Black women organized fierce protests that carried on for weeks. Protesters lay in the road to block rumbling trucks. They marched, chanted and prayed. They got arrested, again and again.

Ultimately, they failed to stop the 22-acre dump. But their efforts spurred other pollution-burdened U.S. communities to take notice and band together to fight what became known as environmental racism.

A historical sign now marks the place that "sparked [the] environmental justice movement" - and Burwell, now 74, is widely acknowledged as a mother of that movement. But as she returned to Warren County on Saturday, even she struggled to grasp what her long-ago protest had borne.

On a sunny afternoon, leaders from around the country converged on Warren County to pay tribute to the movement's beginnings, and to hear Michael Regan, the administrator of the Environmental Protection Agency, announce the creation of a high-level office dedicated to environmental justice and civil rights.

"Phenomenal," Burwell said of the prospect that such issues will become a cornerstone of an agency that for decades did not prioritize, or even always fully acknowledge, the nation's persistent environmental inequities. "This announcement is even more affirmation that the work was not in vain."

The formation of an Office of Environmental Justice and External Civil Rights, which will have hundreds of staff members and a Senate-confirmed director, marks one of the most visible efforts so far by the Biden administration to ensure that the well being of marginalized communities is an integral part of federal decision-making.

By placing the new office on par with EPA's other core programs, such as those that oversee the nation's air and water regulations, the White House also hopes to enshrine the focus on environmental justice in ways that future administrations cannot simply ignore.

"This means that at the top of the EPA leadership pyramid, when decisions are made, environmental justice and civil rights will be baked in from beginning to end," Regan said in an interview ahead of Saturday's announcement.

"You have to have the structural changes," he added. "If it's an important issue, it needs to be front and center. It needs to be elevated."

Mustafa Santiago Ali helped shape the EPA's original environmental justice office, established during the early 1990s, and became a key adviser to administrators under Republican and Democratic presidents. During his 24 years at the agency, he saw the focus on vulnerable communities rise and fall.

"With different administrations, some would prioritize environmental equity, and others would let it fall by the wayside and only pull it out whenever there was a significant issue that happened," said Ali, executive vice president for the National Wildlife Federation, who left EPA in the early days of the Trump administration.

By contrast, Biden administration officials said the new office - which will be created by combining three existing offices at EPA and elevating it on the agency's organizational chart - will have a budget of roughly $100 million and 200 employees spread across the Washington headquarters and 10 regional operations.

Ali described such changes as "transformational."

Getting to that table has been a long and rocky road.

Even before national newspapers and television networks covered the Warren County protests in 1982, poor and segregated communities around the nation had largely worked in the shadows, battling coal-fired power plants, sewage treatment facilities, fossil fuel refineries, landfills and other pollution sources.

Beginning in the early 20th century, mostly White public officials in many places instituted "redlining" policies that kept Black, Latino and other minority, low-income residents in neighborhoods deemed undesirable. It was in those same places that heavy industry and other sources of pollution were allowed to cluster, exposing residents to layer upon layer of health risks, many of which remain.

A 2017 study by the Clean Air Task Force found that Black people are nearly four times as likely to die of exposure to pollution than White people, for instance. But the problems slowly began to garner more widespread attention in the wake of the demonstrations in Warren County.

Several years after the protests, a landmark 1987 study called "Toxic Wastes and Race in the United States" detailed how communities with higher percentages of minorities were more likely to be home to hazardous waste facilities.

That was followed by the First National People of Color Environmental Leadership Summit in Washington in 1991, attended by activists from polluted places from Alaska to Albuquerque, and from Houston to Chicago. The gathering helped galvanize once-isolated communities into a national movement.

"The summit was about people of color taking charge of their destiny," said Robert Bullard, a professor at Texas Southern University and the author of "Dumping in Dixie," told The Washington Post last year.

Still, there was no significant support from Congress. In 2004, during the George W. Bush administration, the EPA inspector general found that the agency had failed to incorporate environmental justice into its day-to-day decision-making and had "not developed a clear vision or a comprehensive strategic plan."

President Barack Obama later revived the office's original mission, though some activists argued his administration should have more aggressively focused on the issue. President Donald Trump later tried to zero out the office's budget altogether.

"I can't tell you how much time we spent debating whether environmental justice - or environmental injustice - was a real thing," said Vernice Miller-Travis, a veteran activist for affected communities. "We spent decades going around and around on that."

She hopes that Saturday's announcement means those days are finally over.

"It will now become a part of the institutional fabric of EPA," Miller-Travis said. "It's going to take a hell of a lot to try to unravel that going forward."

President Biden has made tackling the nation's environmental disparities a cornerstone of his administration, making the issue a priority in a way no previous president has.

In the days after he took office, Biden directed agencies across the government to invest in low-income and minority communities that have traditionally borne the brunt of pollution.

He established a White House interagency council on environmental justice, created an office of health and climate equity at the Health and Human Services Department and a separate environmental justice office at the Justice Department. He also directed the government to steer at least 40 percent of its sustainability investments toward historically disadvantaged communities.

The past year and a half has been an exercise in trying to prove that those promises - and real investments - are becoming reality in communities most in need.

The Biden administration said it is making progress. It points toward the tens of billions of dollars included in last year's Bipartisan Infrastructure Law, including money to update aging drinking water infrastructure around the country, as well as to cap leaking oil and gas wells, reclaim abandoned mine caps and clean up toxic pollution sites located near disadvantaged communities.

In addition, the recently passed Inflation Reduction Act contains billions more in grants targeted toward environmental and climate justice, such as cleaning up ports and rail yards and increased air-quality monitoring near schools and vulnerable neighborhoods. Those funds will be overseen by the new EPA office announced Saturday.

Collectively, those and other measures are designed "to ensure that benefits flow to disadvantaged communities today and in the future," Candace Vahlsing, associate director for climate at the White House Office of Management and Budget, said in an email.

Still, questions remain about exactly how - and how quickly - those funds will be , and whether legislative compromises could lead to more pollution in certain places already shouldering an undue burden of risks.

"We can't use the new office of environmental justice as our litmus test. The litmus test is, how are they doing in reaching folks and getting resources to them?" Ali said. "The question becomes, is your life better?"

Miller-Travis agrees that a main hurdle will be rectifying the "historic neglect" of environmental justice.

"Where the rubber is going to hit the road is when they start to release this money to state agencies," she said. "How do you make sure those state agencies treat everyone equally under the law, which they haven't always done before? . . . Now is the moment to make those places whole."

Regan insists that is the goal. He said the EPA has the ability to push grants directly to nonprofits, school districts, counties and front-line communities affected by pollution. He said lawmakers also made clear that a significant portion of funding for key water infrastructure, for instance, should be directed toward disadvantaged communities.

"We are focused on those communities that have the potential to be disproportionately impacted by climate impact," Regan said. "And we will be sure that they are front and center."

In some industrialized areas, worry also remains that provisions in the recent funding bills could allow more offshore drilling, relax permitting requirements and reduce public input about proposed infrastructure projects. Some communities worry such changes could result in more pollution from fossil fuel production and other effects.

"We're not really excited about that aspect of it, and we're hoping we can overturn that particular part of the agreement," said Hilton Kelley, an environmental and community activist in Port Arthur, Tex., home to oil refineries, liquid natural gas terminals and dozens of other facilities that release toxins into the air.

Kelley said he understands trade-offs were necessary to secure the unprecedented amounts of funding and, in particular, to secure the vote of Sen. Joe Manchin III (D-W.Va.). And he believes Biden is working hard to live up to his promises to Americans overburdened by pollution.

But if the worrisome parts of those legislative deals stick, he said, "We have fewer tools in the toolbox to fight for environmental justice."

On Saturday, the mother of the environmental justice and other leaders marveled at how their cause had found its way from the fringes of the American conservation movement to the heart of a president's agenda.

"I'm tremendously excited. It's a huge step forward," Burwell said in the lead-up to the event. "We worked a long time to get EPA to understand and to acknowledge environmental racism . . . Just acknowledging that is important to me."

Where she had once found herself marching in the street and carted away in handcuffs, she now found herself celebrating the sort of affirmation she and others had never quite anticipated.

But Burwell is quick to add that it is important not to grow complacent, that the threat of injustice is unceasing.

"If I've learned anything over 40 years, it's that the work is not done," she said. "I see the progression of the commitment for achieving environmental justice. But we can't rest on our laurels."

She and others had come too far, seen too much, for that.

"The war is won in incremental struggles, one battle at a time," Burwell said. "The war is never over."

The Washington Post's Steven Mufson contributed to this report.