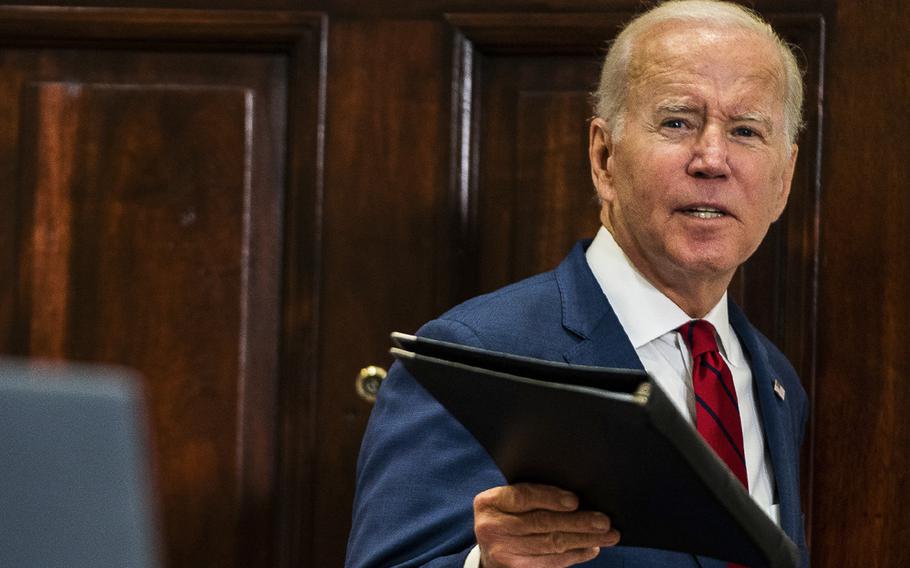 President Joe Biden responds to a question from reporters after delivering remarks about the Disclose Act at the White House on Tuesday, Sept. 20, 2022. (Demetrius Freeman/Washington Post)

— President Biden, in an interview with 60 Minutes, aired Sept. 18

Do Americans still care about budget deficits? President Biden appears to believe so, since he's constantly crowing about his record of deficit reduction.

Just in the week before the 60 Minutes interview, the president mentioned having reduced the budget deficit by $350 billion six times, sometimes saying he wants to counter accusations that he's running up the federal tab.

"By the way, when you hear your Republican friends or anybody else tell you, 'Boy, they're spending a lot of money,' guess what? We cut the budget [deficit] $350 billion last year," he said at an infrastructure event in Boston on Sept. 12. At a fundraising event in the city, Biden said: "Our Republican friends talk about, well, 'Big Spendin' Biden.' Well, guess what? I lowered your deficit by $350 billion the first year and over $1 trillion this year."

Biden never quite says his policies reduced the deficit. But when he says things like "I lowered your deficit," he certainly signals that.

The president is playing a rhetorical shell game. He's trying to dazzle listeners with impressive-sounding numbers. But the reality is he's increased the budget deficit, not reduced it.

Budget deficit numbers are complicated - and often dull. So we will try to keep this as simple as possible.

The best way to determine a president's impact on budget deficits is to look at what was predicted before he arrived - and then what happened after his policies have been enacted.

The Congressional Budget Office, the official scorekeeper, in February 2021 estimated the budget deficit would fall dramatically in fiscal 2021 and 2022 because emergency pandemic spending would lapse. Budget deficits would be high in both years, but the red ink would begin to shrink.

But here's the shell game.

Before Biden took office, CBO said in its early 2021 projection that the budget deficit was expected to decline $875 billion in 2021. But then Biden enacted additional covid relief funds and other new policies, resulting a more modest decline of $360 billion.

In other words, Biden is bragging about reducing budget deficits even as he increased the national debt about $500 billion more than originally projected.

Of course, budget projections are not written in stone, especially in the long term. Technical factors, such as inflation increasing tax revenue, can change the underlying mix of spending and revenue. A White House official emphasized to the Fact Checker that outlays (spending) fell by about $950 billion from 2021 to 2022 but revenue also increased by around $800 billion.

The official noted that deficit share of gross domestic product (GDP), the broadest measure of the economy, declined to 4.2 percent, compared to 4.6 percent in CBO's February 2021 projection. "That shows that the strong recovery under President Biden didn't just drive a strong recovery but also led to a better fiscal outcome," the official said.

But Marc Goldwein, senior vice president at the nonpartisan Committee for a Responsible Federal Budget (CRFB), calculates that deficits would have been about 3.3 or 3.4 percent of GDP if everything were the same as in the February 2021 projection. The big difference was the impact of inflation, according to the CBO - and an unexpected $80 billion windfall in 2021 for the government for in the sale of telecommunications licenses.

In other words, again the data show the deficit picture has worsened under Biden.

Moreover, any suggestion that this claimed deficit reduction will help pay for student loan relief is disingenuous. The budget deficit soared in the first place because of a national emergency. "This is like a family going into debt for a one-time $100,000 medical expense, and then the next year claiming they can afford to borrow $50,000 for a sports car because the medical expense is over," said Brian Riedl, a budget expert at the Manhattan Institute.

Now that we have examined the budget impact of the first two years of the Biden presidency, let's turn to the future.

Unexpected emergencies, such as the war in Ukraine, often put pressure on the federal budget. Biden managed to obtain passage of an infrastructure bill long sought by members of both parties. We take no position on whether certain programs are necessary or desirable. We're just looking at the numbers - and they also show future increases in the deficit.

According to a new accounting by the CRFB, under Biden an additional $4.8 trillion in borrowing has been added in the 2021-2031 period.

"This $4.8 trillion is the net result of roughly $4.6 trillion of new spending, roughly $500 billion of tax cuts and breaks, and $700 billion in additional interest costs, partially offset by $400 billion of spending cuts and $600 billion of revenue-increasing policies," CRFB said.

The policies that have boosted deficits included:

- Assisting Ukraine in its war with Russia ($55 billion).

On the other side of the ledger, the energy and health bill dubbed the Inflation Reduction Act was crafted to show about $240 billion in deficit reduction over ten years. But the bill would shrink deficits by only about $90 billion if a three-year extension of expanded health care subsidies were made permanent, CRFB estimated.

You know how it goes in Washington - a temporary measure often keeps getting extended if the benefits remain popular. And, for budget optics, extending a program for only three years costs less, on paper, than one in place for ten years.

Biden is citing real deficit-reduction numbers, but doing so in a way to mislead listeners.

The president is leaving out important context. The budget deficit was supposed to shrink as the massive spending caused by the pandemic faded.

Indeed, the budget-deficit picture, now and in the future, would have been better if not for Biden's policies. He has every right to argue that those policies were needed. But he cannot suggest that they reduced the budget deficit.