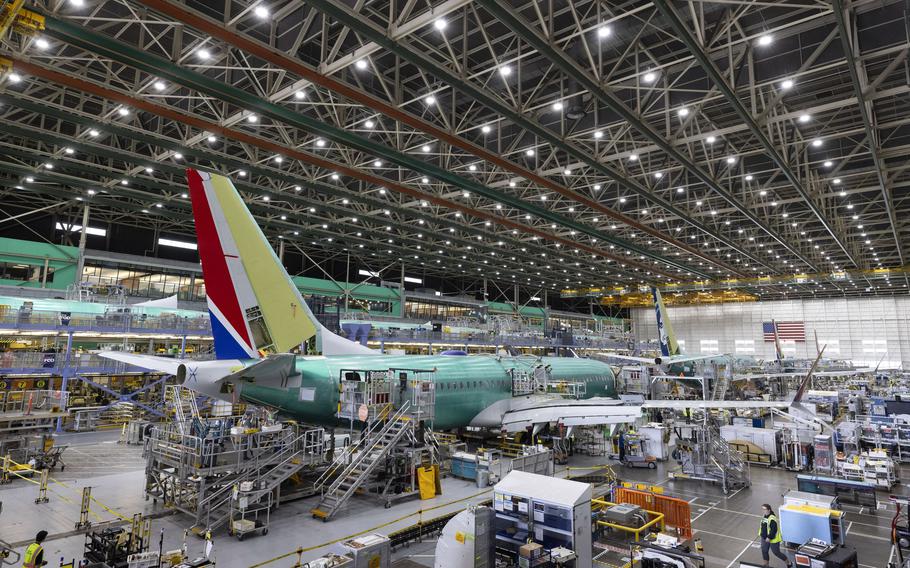 Boeing employees work on the 737 MAX on the final assembly line at Boeing's Renton plant, June 15, 2022 in Renton, Wash. The SEC announced Thursday, Sept. 22, 2022, that Boeing Co. will pay $200 million to settle allegations that the company and its former CEO misled investors about the safety of its 737 Max after two of the airliners crashed, killing 346 people. (Ellen M. Banner/AP)

Boeing Co. will pay $200 million to settle charges that the company and its former CEO misled investors about the safety of its 737 Max after two of the airliners crashed, killing 346 people.

The Securities and Exchange Commission said Thursday that it charged the aircraft maker and former CEO Dennis Muilenburg with making significant misleading public statements about the plane and an automated flight-control system that was implicated in the crashes in Indonesia and Ethiopia.

Neither Boeing nor Muilenburg admitted wrongdoing, but they offered to settle and pay penalties, including $1 million to be paid by Muilenburg, who was ousted in December 2019, nine months after the second crash.

The SEC said Boeing and Muilenburg knew that the flight system, known as MCAS, posed a safety issue but promised the public that the plane was safe. The SEC said they also falsely claimed that there had been no gaps in the process of certifying the plane in the first place.

"Boeing and Muilenburg put profits over people by misleading investors about the safety of the 737 Max all in an effort to rehabilitate Boeing's image" after the crashes, said Gurbir Grewal, director of the SEC's enforcement division.

Boeing said it has made "broad and deep changes across our company in response to those accidents" to improve safety and quality.

"Today's settlement is part of the company's broader effort to responsibly resolve outstanding legal matters related to the 737 Max accidents in a manner that serves the best interests of our shareholders, employees and other stakeholders," said the Arlington, Virginia-based company.

A new Max operated by Indonesia's Lion Air crashed into the Java Sea in October 2018, and another Max flown by Ethiopian Airlines nosedived into the ground near Addis Ababa in March 2019. In each crash, MCAS pushed the nose down after getting faulty readings from a single sensor, and pilots were unable to regain control.

The crashes led regulators around the world to ground the plane for nearly two years until Boeing made fixes to the flight-control system, which was designed to help prevent aerodynamic stalls when the nose points up too sharply. Neither plane that crashed was in danger of stalling.

The SEC accused Boeing of misleading investors in a press release after the Indonesia crash which said the plane was "as safe as any airplane that has ever flown the skies." Boeing knew when it made that claim that MCAS would need to be fixed and was already designing changes, the SEC said.

After the crash in Ethiopia, Muilenburg said on a call with investors and Wall Street analysts and during Boeing's annual shareholder meeting that the company had followed the normal process for getting the plane certified by regulators. But by then Boeing — in response to a subpoena from federal prosecutors — had already found documents indicating that it didn't disclose key facts about MCAS to the Federal Aviation Administration, the SEC charged.

Boeing reached a separate $2.5 billion settlement with the Justice Department last year. Most of that money went to airlines whose Max jets were grounded.