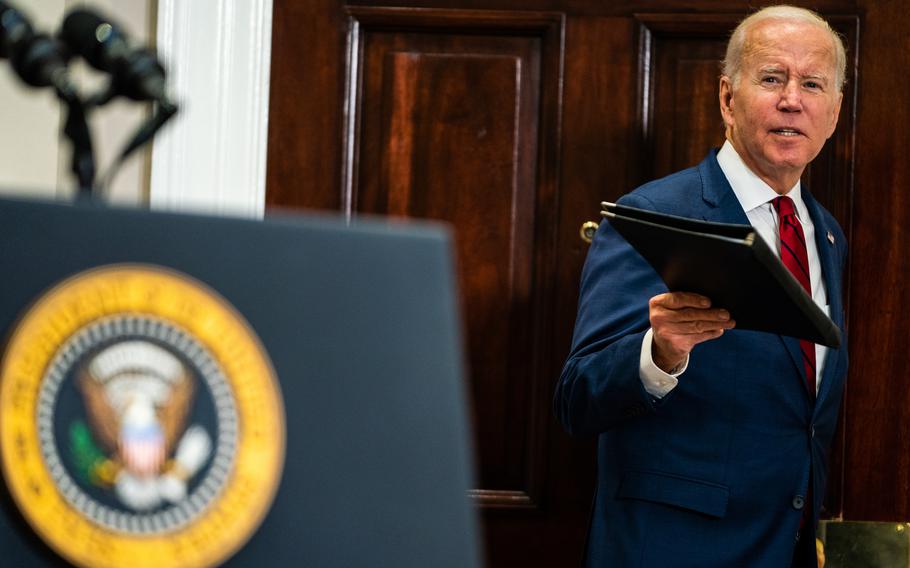 President Joe Biden responds to a question from reporters after delivering remarks about the Disclose Act at the White House on Tuesday. (Demetrius Freeman/Washington Post)

WASHINGTON - Senate Republicans on Thursday blocked legislation that would have required super PACs and other groups to disclose donors who give $10,000 or more during an election cycle, a blow to Democrats’ efforts to reform campaign financing laws.

In a procedural vote Thursday morning, the Senate failed to advance the Disclose Act on a 49-49 vote along party lines. No Republicans voted for it. At least 60 votes would have been required for the Senate to end debate on the bill and advance it.

Spending in election cycles by corporations and the ultrawealthy through so-called dark money groups has skyrocketed since the 2010 Supreme Court decision Citizens United v. FEC, which allowed incorporated entities and labor unions to spend unlimited amounts of money to promote or attack candidates. Democrats have railed unsuccessfully against the ruling for more than a decade, saying the ability for corporations and billionaires to advocate for or against candidates anonymously through such groups has given them outsize influence in American politics. Republicans have defended the right of corporations to make political donations, even as some of them have called for greater transparency in campaign financing.

Before the vote Thursday, Senate Majority Leader Chuck Schumer (D-N.Y.) noted that, when the Supreme Court handed down its decision in Citizens United, the dissenting justices had warned that the ruling “threatens to undermine the integrity of elected institutions across the nation.”

“Sadly, they turned out to be right,” Schumer said. “By giving massive corporations the same rights as individual citizens, multibillionaires being able to have their voice . . . drowning out the views of citizens, and by casting aside decades of campaign finance law and by paving the way for powerful elites to pump nearly endless cash, Citizens United has disfigured our democracy almost beyond recognition.”

“Now the choice before the Senate is simple. Will members vote today to cure our democracy of the cancer of dark money, or will they stand in the way and let this disease metastasize beyond control?” Schumer added. “Members must pick a side. Which side are you on? The side of American voters and ‘one person, one vote’ or the side of super PACs and the billionaire donor class rigging the game in their favor?”

Sen. Sheldon Whitehouse (D-R.I.), the bill’s sponsor, compared such dark money groups to “a dark octopus of corruption and deceit” that had infiltrated democracy. And though federal law prohibits super PACs from coordinating with political campaigns when it comes to spending and content, Whitehouse added, “you can bet” that candidates - and lawmakers - get wind of that information anyway.

“This is the kind of phony fun and games the dark money allows to intrude into our democracy,” Whitehouse said.

In a committee hearing on the bill in July, Sen. Ted Cruz (R-Texas) called the measure “unconstitutional” and accused Democrats of designing it “to target and harass speech that the left doesn’t like.”

Earlier this week, President Joe Biden called on Republicans to join Democrats in supporting the Disclose Act. In remarks at the White House, Biden invoked the late senator John McCain (R-Ariz.), saying his “friend” supported campaign finance reforms as a matter of fundamental fairness. He pointed out that currently advocacy groups can run ads until Election Day without revealing who paid for the ad, and that even foreign entities that are not allowed to contribute to political campaigns can use dark money loopholes to try to influence elections.

“And at its best, our democracy serves all people equally, no matter wealth or privilege,” Biden said then. “But here’s the deal: There’s much - too much - money that flows in the shadows to influence our elections . . . Dark money has become so common in our politics, I believe sunlight is the best disinfectant.”

Biden said that dark money groups were a problem for both Republicans and Democrats, but said that so far Republicans in Congress had not supported passing new campaign finance laws to address the issue.

The Washington Post’s John Wagner and Azi Paybarah contributed to this report.