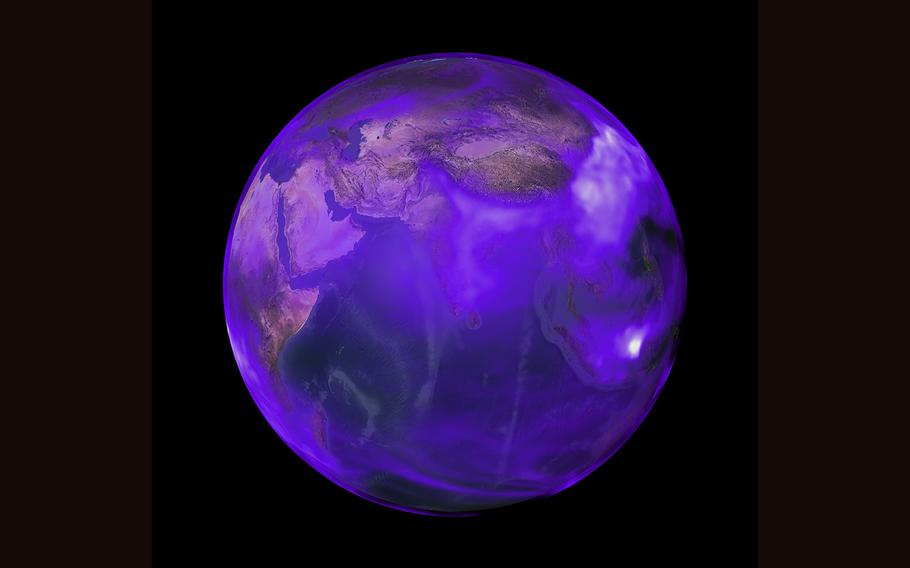 The Earth is seen in an illustration depicting the dangers of black carbon, or soot, which is believed to be a culprit in climate change. President Joe Biden was set to miss a U.N. roundtable on climate action on Wednesday, Sept. 21, 2022, as he has had to put climate change on the back burner. (NASA/Defense Department)

The expected absence of Biden served to underscore a warning that came Tuesday in the speech that opened the meeting of the United Nations General Assembly. "The climate crisis is the defining issue of our time. It must be the first priority of every government and multilateral organization," said U.N. Secretary-General António Guterres. "And yet climate action is being put on the back burner — despite overwhelming public support around the world."

The closed-door meeting slated for Wednesday, to be hosted by Guterres and the president of Egypt, is meant as an informal exchange on climate matters ahead of the U.N.'s November climate summit in the Egyptian resort of Sharm el-Sheikh. Biden is expected to host a Global Fund to Fight AIDS, Tuberculosis and Malaria event at the same time, according to people familiar with the matter. White House spokespeople did not immediately respond to a request for comment.

"This is a global crisis that requires a global response, and discussion at the leader level is always essential," said David Waskow, director of the World Resources Institute's international climate initiative.

The warning from Guterres on Tuesday comes as more than 1 million people in Puerto Rico lack power after Hurricane Fiona this week dropped upward of 30 inches of rain in parts of the island. Meanwhile, on the other side of the world, Pakistan continues to recover from historic floods worsened by climate change that impacted 33 million people. Earlier this year, scientists warned the goal in the Paris Agreement to limit warming to 1.5 degrees Celsius was officially on life support.

As more and more climate disasters hit, countries are also struggling with threats to democracy, inflation, the ongoing pandemic, Russia's war on Ukraine that's upended energy markets, tensions between China and Taiwan, and more. These issues preoccupied world leader speeches that followed Guterres' own on Tuesday.

"The multiple and often interconnected crises of recent years have exposed significant gaps in global governance," said Kassym-Jomart Tokayev, the president of Kazakhstan. Before reiterating his country's goal to reach net zero carbon emissions by 2060, he emphasized how the U.N. sustainable development goals were hindered by the pandemic, geopolitical conflict and the triple threat of climate change, biodiversity loss and pollution. When climate change was briefly mentioned at the U.N.'s opening day, leaders spoke about the need to cooperate on the crisis and funnel more money into adapting to a warmer world and supporting people suffering from climate impacts already here. The tempo of increasingly intense climate-related disasters has intensified calls for rich, developed countries to help pay for losses tied to warming.

Senegalese President Macky Sall specifically called for funding to help the African continent adapt to the warming impacts of climate change locked in, and Colombian President Gustavo Petro warned about efforts to cut down the Amazon and other local forests, critical sinks of carbon dioxide.

Others pointed to disparities in who produces planet-warming pollution. "As many of you are experiencing, the climate crisis is particularly affecting our continent, the Americas and especially the Caribbean," said Chilean President Gabriel Boric. "But our country, as many of yours, many of the global South, produces and is responsible for a minimum greenhouse gas emissions. In our case, it's only 0.24%."

He noted that the large economies in the G-20 produce 80% of greenhouse gases.

"It is clear nowadays that no country, large or small, humble or powerful, can save itself on its own," Boric added.

With the next major U.N. climate talks only two months away, Guterres called on world leaders to finally "put fossil fuel producers, investors and enablers on notice."

"Polluters must pay. Today, I am calling on all developed economies to tax the windfall profits of fossil fuel companies," the secretary-general said. "Those funds should be redirected in two ways: to countries suffering loss and damage caused by the climate crisis, and to people struggling with rising food and energy prices."