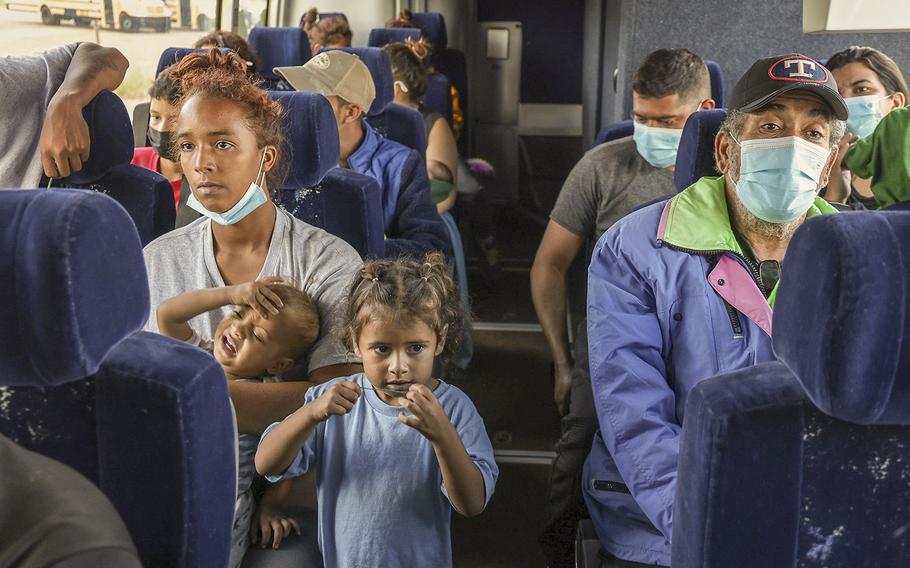 A bus full of people from Venezuela, Nicaragua and Cuba are shuttled away from Eagle Pass, Texas, on Sept. 18, 2022, as more asylum seekers were wading through the mostly-shallow waters of the Rio Grande from Piedras Negras, Mexico. (Carl Juste/Miami Herald/TNS)

This tiny Texas town, located 2.5 hours of sweltering highway southwest of San Antonio, has become a common point of entry for asylum seekers from Central and South America. Among them: the 48 migrants who were unwittingly sent to the posh Massachusetts island by Florida Gov. Ron DeSantis last week after many said a mysterious woman who identified herself as "Perla" promised them jobs on the other end of the trip.

On Sunday, a family from Venezuela turned themselves in to U.S. authorities in Eagle Pass, after wading through the mostly shallow water of the Rio Grande that runs under one of the bridges connecting the border town to Piedras Negras, Mexico. The family of four had been traveling for over a month, the mother, who identified herself as Carolina, told the Miami Herald. Her youngest child, just over a year old, gave fist bumps to a member of the National Guard offering migrants water and words of encouragement.

There's nothing else for Carolina and others like her in Eagle Pass.

"These people have no money or resources," Garcia said in an interview in Eagle Pass. "They're totally vulnerable to any offer of free transportation since they don't have any resources of their own. If you're a young mother without any resources, you're easy pickings for people who are going to use you as political pawns."

Garcia and other volunteers came to the border to inform migrants of the pitfalls of trusting offers like the one that ended with migrants finding themselves on a Massachusetts island that was unprepared for them.

Instead, they packed the bus carrying volunteers with nearly 30 migrants from Venezuela, Nicaragua and Cuba, who Garcia said crossed the border with children — the youngest one month old — and no resources at all. The price for a bus ticket from Eagle Pass to San Antonio is roughly $50.

None of them could afford that and they might have been stranded had LULAC not offered them seats.

"We depended on the charity of others," said one migrant, Ricardo, who had traveled from Venezuela with his family, including two young children. They had started with nothing but hoped the United States would provide a better life. 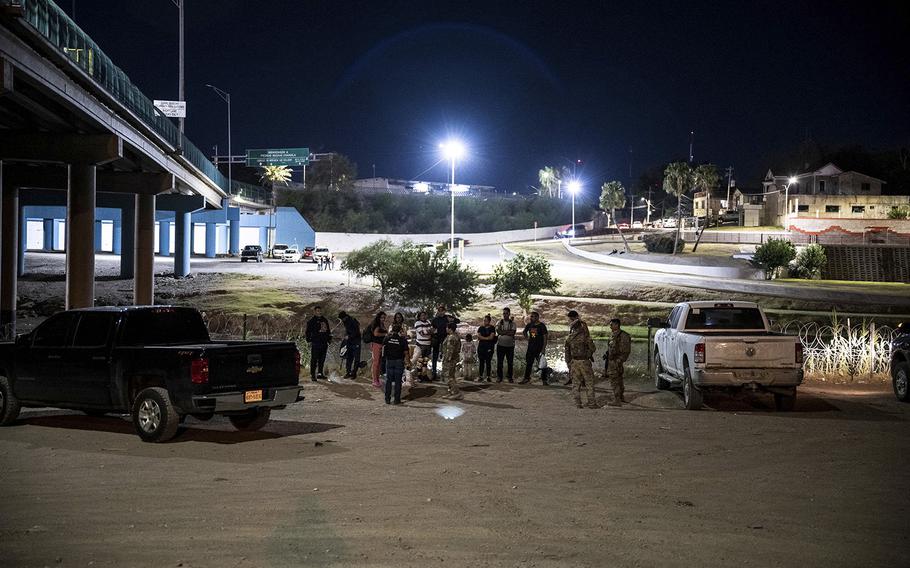 Migrants are apprehended by US Border Patrol and National Guard troops in Eagle Pass, Texas, near the border with Mexico on June 30, 2022. (CHANDAN KHANNA/AFP via Getty Images/TNS)

To get out of Texas, the migrants need to reach San Antonio, which offers a resource center for people who've just arrived in the United States. That's where the previous group of 48 — who Garcia said were mostly Venezuelan — received the offer for free flights.

DeSantis has said he used taxpayer money to fly those 48 migrants from San Antonio to Martha's Vineyard to prevent them from ending up in Florida.

"We've had people in Texas for months, trying to figure out how are these people getting into Florida? What's the movement?" DeSantis said at a Friday news conference. "And the reality is, 40% of them say they want to go to Florida."

But most of the people on the LULAC bus said they wanted to go to New York.

DeSantis' office did not respond to a request for comment late Sunday that asked who the state's "people" on the ground were — or how they'd arrived at the 40% figure the governor cited. DeSantis' operation to move migrants from Texas to Massachusetts has generated national headlines and controversy.

Several of those on the state-financed charter flights to Martha's Vineyard told news outlets that a woman named "Perla" approached them outside the migrant aid center in San Antonio last week. She promised them that they would have work papers waiting for them in Boston and gave some of them food and hotel rooms, according to various outlets. She then arranged for the migrants to board two flights that landed in Martha's Vineyard on Wednesday.

The migrants who got on the flights were fleeing Venezuela, where the economy has collapsed under the regime of Nicolás Maduro, a left-wing, populist indicted by the United States in connection with narco-terrorism and corruption.

The number of Venezuelans entering the United States has steadily climbed this year. In July, U.S. Customs and Border Protection reported encounters with more than 17,000 Venezuelan nationals — triple the figure in May and the highest number since January.

Many are traveling through Panama's treacherous Darien Gap jungle region, where they face harsh conditions, disease and violence from criminal groups, according to the Washington Office on Latin America, a research and advocacy group.

Once they've reached the border, many migrants seek political asylum. After passing a "credible fear screening" — where refugees must demonstrate to U.S. authorities that they face a significant possibility of persecution in their homelands — most are released. That means they can live and possibly work freely in the United States while awaiting an asylum hearing.

Randolph McGrorty, executive director of Catholic Legal Services for the Archdiocese of Miami, said people traveling from Venezuela have "strong political asylum claims" due to the crisis in their homeland. Because of the fractured U.S. relations with Venezuela, it is difficult for the United States to deport people back there, he said. A similar situation exists with deportations to Nicaragua, said Maureen Porras, legal director at the nonprofit Church World Service. Cuba has also rejected deportation flights. More people from all three nations are coming to the United States as the situations there deteriorate, according federal statistics.

All migrants must give Immigration and Customs Enforcement addresses where they plan to stay in the United States, so that the federal government can contact them.

Flying migrants to Martha's Vineyard or busing them to Washington D.C. or Chicago, as Texas Gov. Greg Abbott has done, can complicate their ability to keep up with their cases and make court dates, said Angel Leal, a Miami immigration attorney.

"When the states interfere with that and start transporting these immigrants to random states," Leal said, "it's going to cause problems."

Still, those problems pale in comparison with the perils of the journey to the United States.

Wilmary Muñoz traveled to Eagle Pass from Venezuela, on foot, through the jungle between Colombia and Panama with her 7-year-old son.

"Nobody saves you. You can stay, dying there, nobody is there to help you. Everyone is there for themselves," said Muñoz, who boarded the LULAC bus with her son. "I had to give it everything I had, for him and for me."