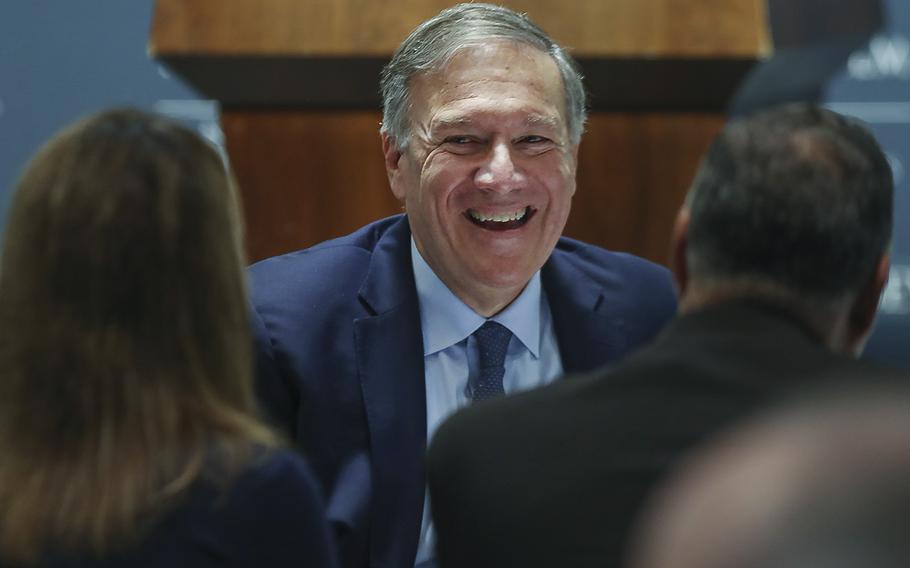 (Tribune News Service) — Former Secretary of State Mike Pompeo teased but did not announce a run at the White House in 2024 during a speakers series event held Tuesday in New Hampshire that’s known for hosting presidential hopefuls.

“Thanks for having an unemployed former diplomat out today,” Pompeo said in Manchester. “Today I get a chance to speak from the heart.”

For two decades, almost every candidate to take a primary debate stage in the months before a presidential election has made a trip to New Hampshire’s Queen City for an appearance at St. Anselm College’s Politics & Eggs speaker series.

Pompeo used his visit this week to lay the groundwork for a run at the nation’s top job, channeling both former President Ronald Reagan and the Rev. Martin Luther King Jr. during his speech, and taking specific aim at a recent speech by President Biden.

“I’m here because a few weeks ago, the president of the United States gave a speech and smeared half the country as enemies of the state. He essentially said if you’re pro-life or you oppose his policies, you’re a threat. I’m here because I’m not going to let that just slide by. I’m going to stand up for the Americans that the president attacked. Because America deserves better than that,” he said.

Pompeo went on to describe Biden as too weak to lead the nation, a weakness he said is too prevalent in the United States today.

“And while none of us know the president’s heart, we do know his ideology. Because we see the impact every day. I can sum up the president’s principles in three words: woke, weak, and waffling,” he said.

Pompeo’s visit follows a stop there in August by former Vice President Mike Pence, whose own White House ambitions have been noted and whose relationship with his former boss is known to be, to put it lightly, contentious.

Pompeo has been making plenty of signals of his own lately.

A political action committee associated with the former CIA director recently launched ads in the early Republican primary states of South Carolina and Iowa, in which Pompeo expresses his support for more religious liberty.

“Let’s make sure our religious freedom and our right to pray are never canceled,” Pompeo says in the ad.

On Tuesday Pompeo acknowledged his appearance in New Hampshire was suggestive of a pending campaign, but said he and his wife wouldn’t make any announcements about his future until after the midterms.

“I’m here. This is not random. Susan and me are thinking about what the right place for us to continue the fight that I spoke about today is. I believe in this country we’re fighting for. Whether we’ll decide to get in the race and run for president I can’t answer,” he said. “We are doing the things that one would do to be ready to make such an announcement.”

Elected three times to represent Kansas in the U.S. House of Representatives, Pompeo is also a veteran of the U.S. Army and graduated top of his class at the U.S. Military Academy at West Point.

His name has been, for the most part, conspicuously absent from the many investigations that surround the 45th president, though he has, according to reporting, appeared before the January 6th committee investigating the attack on the U.S. Capitol.

“What makes America exceptional is the people in this room,” Pompeo told the audience of eventual, first-in-the-nation primary voters.