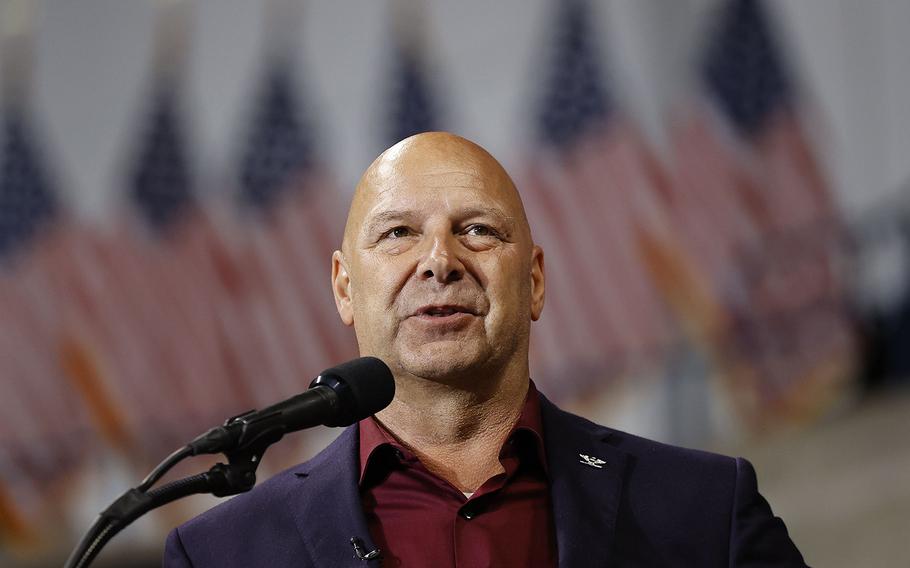 Doug Mastriano talks to supporters during the Save America rally with former President Donald Trump at the Mohegan Sun Arena at Casey Plaza in Wilkes-Barre on Sept. 3, 2022. (Yong Kim, The Philadelphia Inquirer/TNS)

PHILADELPHIA (Tribune News Service) — A group of nearly 60 veterans from Pennsylvania signed a letter deriding Republican candidate for governor Doug Mastriano for being photographed wearing a Confederate Army uniform, calling it “shameful” and saying it’s “an insult to those of us who served and those who continue to serve.”

The letter, released by the campaign of Democratic nominee Josh Shapiro, comes three weeks after a photo surfaced of Mastriano, a state senator and combat veteran, wearing the Civil War-era garb in a faculty photo from when he was a professor at the U.S. Army War College. The photo was from the 2013-14 academy year.

The prominent signatories of the letter are Democrats. They include Patrick J. Murphy, the former under secretary of the Army who served a term in Congress representing Bucks County; U.S. Rep. Conor Lamb, a western Pennsylvania congressman who unsuccessfully ran in the Pennsylvania Senate primary this year; and state Rep. Jared Solomon, D-Philadelphia.

The veterans slammed Mastriano, writing that he ”wore the uniform of traitors who fought to defend slavery on official grounds of the Army War College.” The College, located in Carlisle, removed the photo because it “does not meet AWC values.”

“We lay our lives on the line to defend democracy and Doug Mastriano is actively trying to destroy it,” the veterans wrote. “His dangerous ideals have no place in an organization that requires unity of purpose and action and no place in Pennsylvania.”

Mastriano has said that criticism of the photo is proof that Democrats “have nothing else to run on.”

“I think it’s important to understand the past to have a better future and also to not repeat the mistakes of the past,” Mastriano said in an interview on the far-right channel One America News. His campaign has not responded to repeated requests for comment from The Philadelphia Inquirer.

Mastriano has made his three decades of military service a pillar of his campaign. A retired colonel, he served in Operation Desert Storm and, after 9/11, he led a NATO joint intelligence center in Afghanistan. He retired in 2017.