Could a floating desalination buoy provide water to Vandenberg Space Force Base? 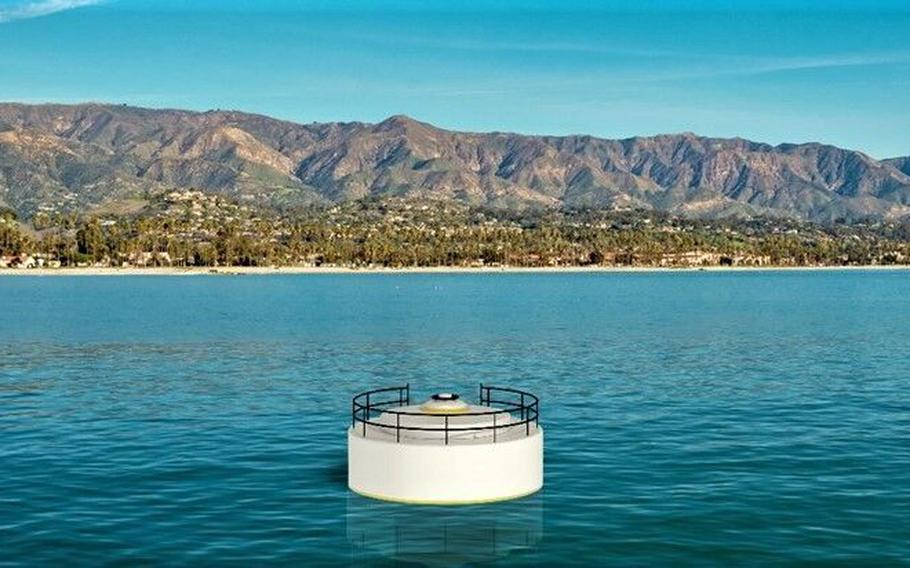 A desalination buoy. The project is the brainchild of the Ocean Portal Water Co., a subsidiary of SeaWell, a water technology company headquartered in Santa Barbara, Calif. (SeaWell)

(Tribune News Service) — A unique water-purifying project might be coming to the Central Coast soon.

It’s a desalination buoy — a floating reverse osmosis plant proposed for testing in the Pacific Ocean about one mile of the coast of the Vandenberg Space Force Base.

The project is the brainchild of the Ocean Portal Water Co., a subsidiary of SeaWell, a water technology company headquartered in Santa Barbara.

Although the Ocean Portal Water Co. has received access to the Vandenberg base to do scoping and siting work, the company has not yet applied for any permits for the project from the state or federal governments. So, it’s still in the very early stages of development.

However, company president Peter Stricker said the project — if all goes smoothly — could be in the water before 2025.

The desalination buoy, which would be the first of its kind, would potentially provide much-needed water in a less impactful way than traditional, on-shore desalination plants, Stricker said.

“We’re the little guys that are trying to come up with a new solution to desal that really does cause less concerns about the ocean and is energy efficient,” he said.

How the desalination buoy works

The buoy would suck in seawater through fine wire screens designed to ensure small ocean organisms are not trapped against them. The water would then pass through a series of filters to remove sediment, bacteria, viruses and minerals.

Then, it’s pumped up to high pressure and pushed through reverse osmosis membranes to remove salt and other dissolved minerals.

The buoy would pump that water back to a water station on shore, which would further disinfect it to ensure it meets drinking water standards. The water could then be distributed to local purveyors.

The buoy would get its electricity from on-shore grid sources, Stricker said.

“We want to be the thing that those big desal plants are not, which is small and flexible,” Stricker added. “At the same time, we want to be producing inexpensive water.”

Stricker said the buoys can be built in a factory, which could make it far less expensive than constructing an entire desalination plant.

“We’re trying to get people informed and asking questions,” he said. “The idea of having a pilot project is to be able to get universities and other folks involved to do study work around the buoy and understand really what its impacts are.”

Vandenberg could use the water

The project has gotten support from Vandenberg, which would receive the desalinated water, Stricker said.

The base is one the most at-risk U.S. military installations in terms of water scarcity, according to a 2019 report by the U.S. Government Accountability Office.

Between 60,000 and 100,000 gallons of water are used for every rocket launch for noise and vibration suppression, heat reduction and fire suppression, according to the report. With launch activities expected to expand as the commercial space sector grows, that water consumption could rise.

Vandenberg gets its water primarily from the State Water Project — which has slashed deliveries by 95% this year as California reservoirs have dwindled during the drought. Stricker noted that he would hope the project could offset the base’s use of this resource.

The base also pumps some groundwater, which is threatened by seawater intrusion and diminishing supply, according to the report.

A Vandenberg spokesperson did not respond to requests for comment from The Tribune.