'Sadistic lie.' Venezuelans flown to Martha's Vineyard search for a way off the island 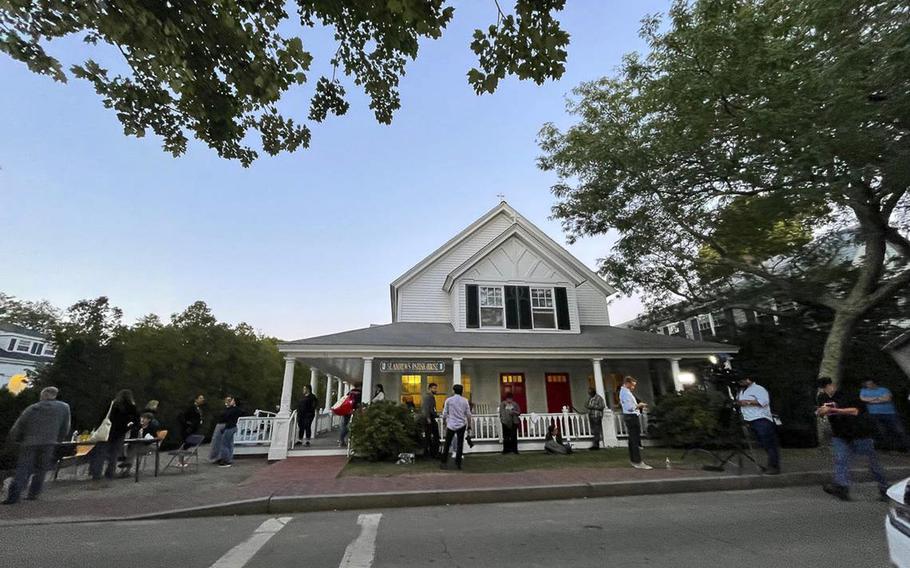 Migrants flown by the state of Florida on Sept. 15, 2022 to Martha’s Vineyard were taken in at St. Andrew’s Episcopal Church in Edgartown, Massachusetts, seen here the following day. (Bianca Padró Ocasio/TNS)

MARTHA'S VINEYARD, Mass. (Tribune News Service) — Standing on a cobblestone sidewalk in a touristy downtown neighborhood of this island thousands of miles from his native Venezuela, a young man used a cellphone Thursday night to record a message to Florida's governor.

"Listen, Ron Desantis, one more Venezuelan speaking here," he said, turning to film the crowd that had come to see the migrants flown by the state of Florida to Martha's Vineyard and the Episcopalian church where they were now sleeping, eating and praying. "And, well, just grateful for the little prank you pulled on us."

About 24 hours after they unwittingly agreed to board private planes to the island, a group of nearly 50 migrants — most, if not all, hailing from Venezuela — remained in limbo Thursday night as volunteer attorneys worked to understand their legal situations.

Migrants in the group said they'd agreed to fly to Massachusetts on the promise of jobs and assistance but didn't realize they were bound for Martha's Vineyard. No one on the island knew they were coming and, according to their attorneys, they'd been given falsified U.S. addresses by immigration officials, perhaps ensuring that they'd be deemed in the country illegally.

"They were told there was a surprise present for them, and that there would be jobs and housing awaiting for them when they arrived. This was obviously a sadistic lie," said Rachel Self, a Boston immigration attorney who was assisting with the migrants' cases.

Local church members and politicians rushed to help. TV cameras on tripods overtook a small one-way street in front of the St. Andrews Episcopal Church, where the families had taken up temporary shelter. Neighbors biked or walked their dogs to witness the scene for themselves.

Inside St. Andrews, volunteers walked in and out all day in shifts. They accepted food. They took in bags of candy. They accepted warm clothes. Staff from the Salvation Army pledged to stay "as long as it takes."

Earlier in the day, they had Mass together. In the evening, everyone was called to dinner behind the parish so they could eat far from the cameras and microphones. Many miles away from home, the families ate a plate of foods they recognized, complete with plantain tajadas.

Attorneys who flocked to St. Andrews to assist the families said the help they were getting on the island stood in stark contrast to the treatment they received on their way there, alleging the migrants endured layers of deception that led them to hop on the planes and could even be entitled to protections conferred to migrants who are victims of crimes.

Self said the migrants were intentionally used to create chaos and crisis, as no government agency or humanitarian organization was alerted about the group's arrival in Martha's Vineyard. Self said the problem was exacerbated when officials with the U.S. Department of Homeland Security allegedly falsified addresses on the migrants' immigration paperwork, and said they could change them upon arriving in Massachusetts.

"Agents apparently chose random homeless shelters all across the country from Washington to Florida, to list the migrants mailing addresses, even when told by the migrants that they had no address in the U.S.," Self claimed.

The group of migrants, Self said, were being asked to appear in jurisdictions near homeless shelters all across the country as early as next Monday. She said the migrants were essentially "kidnapped."

"There is no other reason to list as someone's mailing address a homeless shelter in Tacoma, Washington when they ship him to Massachusetts. It is sickeningly cruel throwing obstacles in the way of people fleeing violence and oppression, some of whom walked through 10 countries in the hopes of finding safety," Self said. "It is shameful and inhuman. Many of these victims were deprived of medical care despite clear existing injuries. These are human beings who were deprived of basic human rights."

Juan Ramirez, 24, from the Andean state of Táchira in Venezuela, said he landed in immigration detention in Texas when he crossed the border 15 days ago. After he was released in San Antonio, an unidentified woman offered to take them to a place where she promised they would be better served.

The woman said their destination wasn't going to be like one of those cities full of Venezuelans with fewer resources to go around, like Miami or New York, according to one migrant who asked not to be named. The woman, the migrant said, suggested she was waiting to reach a certain quota of people to fill the plane's seats so they could make the trip happen.

But the peak season for employment at Martha's Vineyard just ended, as the season changes and part-time residents leave.

"When we get here we find the surprise that no one knew we were coming here," said Ramirez.

Ramirez said volunteers and attorneys have been helping them since yesterday and figuring out plans to move them to other cities, but nothing certain has materialized.

"To these wonderful people who find themselves plane-wrecked on our island, I have a message for all of them," said Self. "You are not alone. We have your backs. We are proud to be here for you."