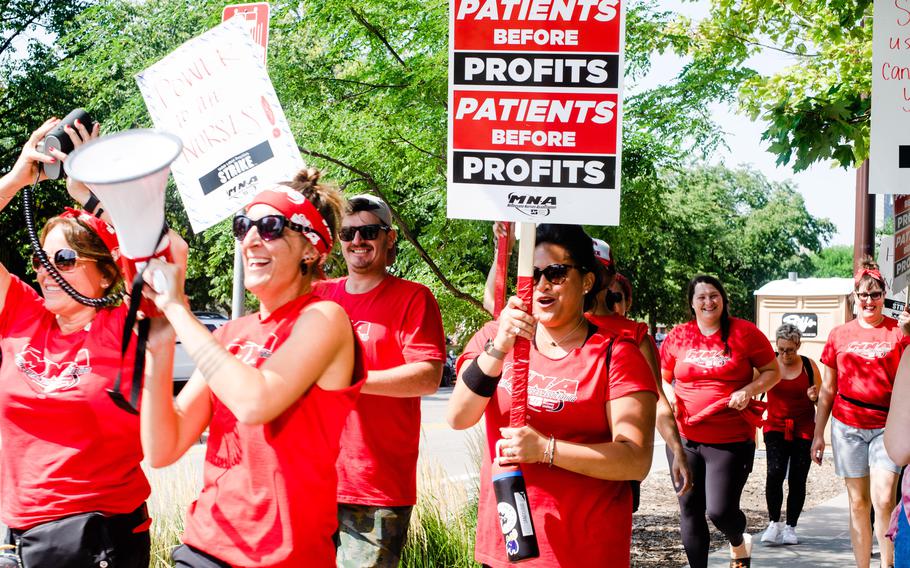 The U.S. economy came within hours of shutting down because of a standoff between unions and railroad carriers over sick pay and scheduling, highlighting just how dramatically staffing shortages have reshaped American workplaces and driven exhausted workers to push back.

With more than 11 million job openings and only 6 million unemployed workers, employers have struggled for more than a year to hire enough people to fill their ranks. That mismatch has left employees frustrated and burned out, and is fueling a new round of power struggles on the job.

While the railway dispute, which the White House helped resolve early Thursday morning, has garnered the most attention, a number of other strikes are spreading across the United States. Some 15,000 nurses walked out of the job in Minnesota this week, and health care workers in Michigan and Oregon have recently authorized to strike. Seattle teachers called off a week-long strike, delaying the start of the school year.

At the center of each of these challenges are widespread labor shortages that have caused deteriorating working conditions. Staffing shortfalls in key industries, such as health care, hospitality and education, have put unprecedented pressure on millions of workers, igniting a wave of labor disputes as well as new efforts to organize nationwide.

Too many industries are still struggling to find workers. The share of working-age Americans who have a job or are looking for one is at 62.4 percent, a full percentage point lower than it was in February 2020, according to Labor Department data.

The reasons are complex and broad. Early retirements, a massive slowdown in immigration that began during the Trump administration, as well as ongoing child care and elder care challenges combined with coronavirus-related illnesses and deaths have all cut into the number of available workers.

“We have approximately 2.5 million fewer people in the labor force than we were on track to have with pre-pandemic trends,” said Wendy Edelberg, director of the Hamilton Project at the Brookings Institution. “That’s a big number, and it means that people who are still there, who are still working these jobs, are having to do even more.”

The stress of working at a business or site that’s understaffed is playing a big role in worker demands, which often revolve around staffing — or lack of it. Seattle teachers wanted better special education teacher-to-student ratios. Railroad conductors and engineers were asking for sick leave. And the nurses who stopped work in Minnesota said they’re looking for more flexible schedules and protections against retaliation for reporting instances of understaffing.

“If you look at sectors like nursing homes, local schools, railroads - employment has fallen like a stone,” said Lisa Lynch, an economics professor at Brandeis University and former Labor Department chief economist. “And with that, you see a marked increase in labor action and strike activity. People are tired and overworked.”

Although the U.S. economy has officially recouped the 20 million jobs it lost at the beginning of the pandemic, the gains have been uneven. Major shortfalls remain, particularly in low-wage industries that have lost workers to higher-paying opportunities in warehousing, construction, and professional and business services. The hospitality and leisure industry is still down 1.2 million jobs from February 2020. Public schools are missing nearly 360,000 workers and health care has yet to recover 37,000 positions. Rail transportation, meanwhile, is down 12,500 jobs.

After months of juggling extra duties, Sabrina Montijo quit her $19-an-hour teacher’s aide job in the Bay Area in August. She now cares for her two young children full-time and says she isn’t sure when she’ll return to the workforce.

“Ever since the pandemic started, we were incredibly short-staffed,” Montijo, 33, said. “I had to work off the clock because there was nobody there. We couldn’t find staff and if we did, we were constantly having to train someone, always having to start over.”

Between the added pressure at work and trouble finding affordable child care, she says it just made sense to leave. Managing on just one income from her husband’s job as a butcher at Safeway hasn’t been easy, but Montijo says it’s better than the alternative.

“It got to the point where I didn’t feel like I had a choice,” she said. “I was having to set up arts and crafts, do science projects, make phone calls and talk to parents - all at the same time. There’s only so much one person can do.”

Worker burnout has become a persistent problem across the economy, though labor economists say it is especially pronounced in industries with acute labor shortages. Many front-line workers in retail, restaurants, education and health care who worked throughout the pandemic — often putting their health and well-being at risk — say their jobs are becoming even tougher as vacancies pile up.

Although employers across the economy say they’re struggling to find and keep workers, labor shortages are most pronounced in retail (where roughly 70 percent of job openings remain unfilled), manufacturing (about 55 percent) and leisure and hospitality (45 percent), according to a U.S. Chamber of Commerce analysis of Labor Department data.

“When you look at the jobs that are having trouble hiring, it’s the ones with really long hours, inflexible schedules, not great pay and limited benefits,” said Paige Ouimet, a professor at the University of North Carolina’s Kenan-Flagler Business School who focuses on finance and labor economics. “Running your workers like this - asking them to do 20, 30 percent more because you’re short-staffed - it’s very much a short-term strategy. You’re going to keep losing people.”

In many cases, employers have begun raising wages in hopes of attracting new workers. The highest wages gains have been in the lowest-paying industries, like hospitality, where average hourly earnings are up 8.6 percent from a year ago. (That’s compared to an increase of 5.2 percent for all workers.)

But while those pay increases may not be going far enough in attracting or keeping workers, economists say they are contributing to inflation. Restaurants, airlines, health care companies and transportation providers are all charging more, in part, they say, because of rising labor costs.

Aveanna Healthcare, which provides home health care and hospice services, is collaborating with the Medicaid programs it works with to increase reimbursement rates to offset higher pay for nurses.

“Inflation has driven our workforce to seek employment that can and will pay higher wages,” Tony Strange, the company’s chief executive, said in an earnings call last month. “We need to increase caregiver wages on average 15 percent to 25 percent in certain markets that we serve. We will systematically go through state by state and contract by contract and adjust reimbursement rates.”

New inflation data released this week showed that prices remained stubbornly high, in large part because of rising costs for services including health care and transportation. Unlike prices for TVs and furniture, which are largely dependent on the cost of materials and shipping, economists say service inflation tends to be closely linked to workers’ wages.

“It is clear that the tight labor market is leading to wage growth, which is leading to price growth,” said Jason Furman, an economics professor at Harvard University. “Inflation in services tends to be much more persistent and it’s much harder to bring down. Gasoline prices are very volatile. Goods prices are somewhat volatile. But in services, if prices are high one month, they’re probably going to remain high next month.”

It’s unclear whether — or when — many of the people who left the workforce during the pandemic will return. That’s particularly true for workers 55 and older, who have stopped working at higher rates. The job market is still short more than 500,000 workers from that age group.

“There’s been a very significant and persistent decline in labor force participation among workers over 55,” said Edelberg of the Brookings Institution. “The pandemic has been a moment of introspection and reevaluation, and it has led a lot of people to step out of the labor force.”

Joseph White, who lives in Nashville, lost his job at Guitar Center six months into the pandemic. But he says he’d had enough: The store was constantly short-staffed and customers were intractable. In one instance, a shopper pulled a gun on him for trying to enforce the company’s mask mandate.

He’s begun drawing on social security payments to make ends meet, and helps his wife run her small shop, Black Dog Beads. But White says he has no intention of joining the labor force again.

“Our quality of life is far better even though we have less income,” he said. “I got tired of being a commodity.”

The Washington Post’s Lauren Kaori Gurley and Jeff Stein contributed to this report.