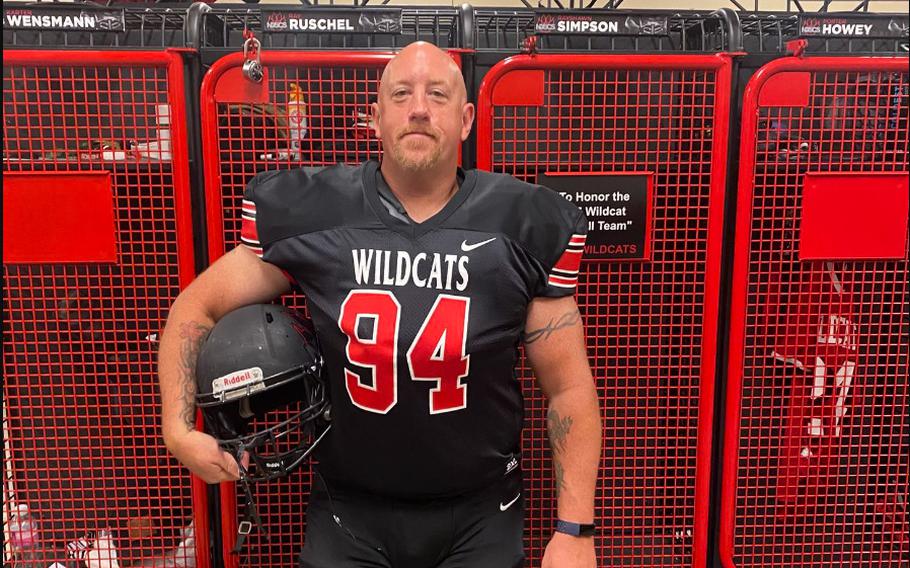 Ray Ruschel is a defensive lineman this season for the Wildcats at North Dakota State College of Science. He’s 49. (Courtesy of Ray Ruschel.)

Ray Ruschel was standing in line to get his uniform after making the football team this summer at North Dakota State College of Science when he noticed some of his teammates staring at him.

One of them asked him if he was a coach. Actually, no, he told them. He’s a player.

“They were like, ‘Really? Are you serious? How old are you?’ “ Ruschel said.

Ruschel, a business management student at the two-year college in Wahpeton, is 49.

It isn’t every day that a night-shift worker in his late 40s decides to go to college, Ruschel acknowledged. It’s even more rare for someone his age to try out for a team against athletes three decades his junior - particularly in a sport involving brute force contact and a high risk of injury.

“When I decided to get an associate’s degree and found out there was a football team, I got to thinking about it,” said Ruschel, a defensive lineman who wears number 94. “And I decided, ‘Why not?’ “

Ruschel knew he would stand out, he said, but he also knew he wouldn’t be the first athlete to get on the field while others his age were content to cheer from the stands.

Tom Brady is the oldest player in the NFL at age 45, Udonis Haslem is still shooting baskets for the Miami Heat at age 42, and Zdeno Chara ended his 24th season with the NHL last year with the New York Islanders at age 44.

In college sports, Dan Stoddard, a 38-year-old bus driver from Ottawa, was recruited in 2017 to play basketball for the Algonquin Thunder. And until Ruschel came along, the oldest college football player in the country was believed to be Tom Gore, who suited up last year to play for North Carolina’s Methodist University at age 45.

Ruschel said he wasn’t thinking of breaking a record when he called the head coach of the Wildcats, Eric Issendorf, and asked him to give him a chance. Ruschel had been working out and was in good physical condition.

“I love the game of football and I just wanted to play,” he said. “I figured this was my opportunity. If I tried and failed, I’d have at least tried.”

The bigger regret would be to do nothing, he decided.

The last time Ruschel played on a football team, he was a senior at Trinity High School in Washington, Pa. After he graduated in 1992, he said, he joined the U.S. Army, then the Army National Guard and ended up in Wahpeton, about an hour’s drive from Fargo, in 2018.

Ruschel is the father of two grown children and has been single since 2012, he said. He works the midnight-to-8 a.m. shift as a mechanic at Minn-Dak Farmer’s Cooperative, a large sugar beet processor in the heart of the Red River Valley.

He enrolled in online classes at North Dakota State College of Science earlier this year, he said, with the goal of earning a business management degree and becoming a supervisor at his work. The school has about 3,000 students.

“When a friend of mine told me the college had a football program, I looked into it and did my research, and I found out that as a student, I could play football,” Ruschel said. “So I called Coach Issendorf.”

Issendorf, 48, said he was shocked to learn that a 49-year-old Army veteran wanted to play on his team, which competes as part of the National Junior College Athletic Association.

“He’s a year and one month older than me,” he said. “I told him, ‘Wow, I’ll have to really think about it. This is uncharted territory.’ “

Several months later, when Ruschel dropped by his office to introduce himself and ask again about playing football, Issendorf said they discussed the pros and cons of having a player on the team who was almost 50.

“One of the things I had to weigh was Ray’s safety and the safety of our players,” he said. “Football is a young man’s game.”

“If a guy is constantly getting knocked over or falling into other guys’ legs, he probably shouldn’t be on the team,” Issendorf said. “But Ray looked like he was fit, and he really wanted to play. So we decided to evaluate him.”

Ruschel was invited to the Wildcats’ football camp in July to see if he could hold his own as a defensive lineman with players who were 30 years his junior - most of whom were in fact younger than his own children.

“Was I nervous? Of course,” he said. “I was wondering if the guys would accept me. They’re young and have a lot of talent, and here comes this old guy.”

As it turned out, he didn’t need to worry.

“On the first day of camp, we thought he was a new coach, so yeah, we were definitely surprised when he said, ‘No, I’m actually playing,’ “ said Preston Yohnke, 20.

“But when we saw what he could do, we were impressed,” he added. “To be 49 and competing pretty well on the defensive line? That’s crazy. Ray earned our respect.”

The players have taken him in as one of their own, said Will Katchmark, 19.

“Ray is a really hard-worker - he plays his heart out,” he said. “He asks us how he can do better, and he’s willing to learn. He wants to be treated the same as any other guy on the team.”

Issendorf said Ruschel has been great for the team both on and off the field.

“He’s good for our program and he’s good for our kids,” he said. “He’s able to step up and talk to the younger kids on the team about what a loss means. He teaches them that there’s more to life than winning. It’s about giving it your best.”

Ruschel has played in the Wildcats’ first three games (they won two), and he said he’s now looking forward to his first away game on Sept. 24 when his team takes on Vermilion Community College in Ely, Minn.

“I assume that I’ll be riding the bus with the team, so that should be fun,” he said.

More than anything, though, he’s looking forward to the reaction of the opposing team when they see him on the defensive line.

“I know I’ll get a lot of weird looks, and somebody will say, ‘Man, look at that - they’ve got an old dude on the team,’ “ Ruschel said.

“That always makes me laugh,” he said. “And then, I play harder.”