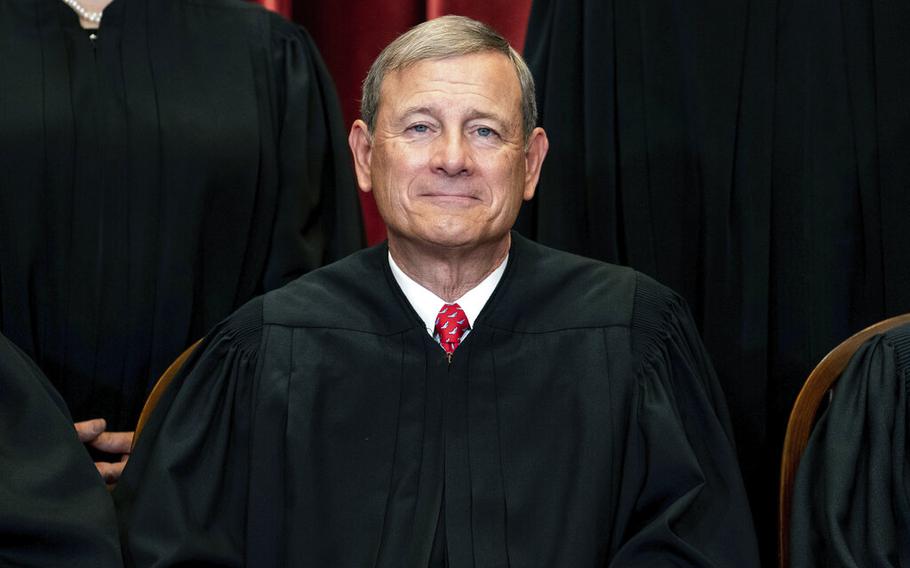 Chief Justice John G. Roberts Jr. defended the integrity of the Supreme Court on Friday in his first public remarks following a tumultuous term, saying that disagreement with its decisions should not lead to questions about its legitimacy.

"The court has always decided controversial cases and decisions always have been subject to intense criticism and that is entirely appropriate," Roberts told a gathering of judges and lawyers in Colorado Springs. But he said that disagreement with the court's role of deciding what the law is has transformed into criticism of its legitimacy.

"You don't want the political branches telling you what the law is. And you don't want public opinion to be the guide of what the appropriate decision is," said Roberts, who added, to laughter, "Yes, all of our opinions are open to criticism. In fact, our members do a great job of criticizing some opinions from time to time. But simply because people disagree with an opinion is not a basis for criticizing the legitimacy of the court."

With the support of three justices chosen by President Donald Trump in the past five years, the Supreme Court now has a 6-to-3 conservative majority. Those justices sent the court on a dramatic turn to the right in the term completed this summer, overturning the guarantee of a constitutional right to abortion in Roe v. Wade, striking a gun control law in New York, limiting the power of the Biden administration to confront climate change, and scoring victories for religious conservatives.

The court's approval rating has dropped to one of its lowest levels ever in public opinion polls, led by unhappy Democrats and by a lesser extent those who view themselves as independent.

But Roberts said it is the Supreme Court's job to decide what the law is. "That role doesn't change simply because people disagree with this opinion or that opinion or with a particular mode of jurisprudence," he said.

Without speaking directly about the court's decision to overturn nearly 50 years of precedent in striking down Roe, Roberts acknowledged the difficulty of the past year.

"It was gut-wrenching every morning to drive into a Supreme Court with barricades around it," Roberts said. And it has been "unnatural" to hold oral arguments by teleconference or before a small number of court personnel and reporters. The court has been closed to the public since March 2020 because of worries about the pandemic.

"When we take the bench the first Monday in October at 10 a.m., the public will be there to watch us," Roberts said. "I think just moving forward from things that were unfortunate is the best way to respond to it."

Roberts was interviewed by two fellow judges at the Bench & Bar Conference of the U.S. Court of Appeals for the 10th Circuit. He was not asked about one of the things that made the term so contentious: a leaked draft of the Supreme Court's abortion opinion in Dobbs v. Jackson Women's Health Organization.

The leak of the draft opinion by Justice Samuel A. Alito Jr. shocked the court, which prides itself on keeping internal deliberations secret. In May, Roberts ordered an investigation into the leak to Politico, but he has said nothing publicly about it since.

Earlier at the same conference in Colorado Springs, Justice Neil M. Gorsuch said the internal investigation was continuing and that he hoped a report would come soon. He did not say whether it would be made public.

The decision has led to protests outside the homes of the justices, most notably Roberts and Justice Brett M. Kavanaugh, who live near each other in suburban Maryland.