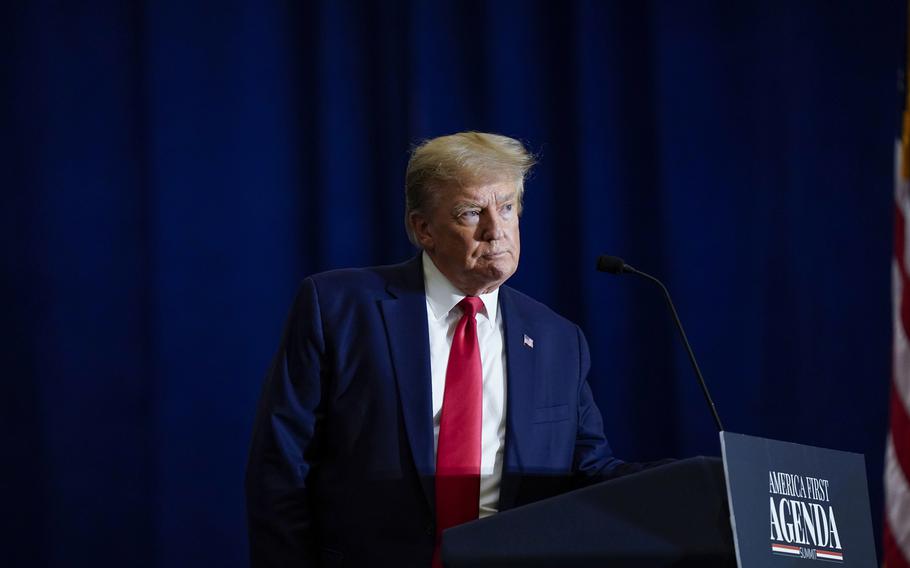 WASHINGTON — A deal announced early this month by House Democrats for years of Donald Trump's financial records allows his former accounting firm to interpret how to satisfy a congressional subpoena that was narrowed down by a federal appeals court in July, according to a settlement filed late Friday.

Under the proposed deal, Trump and several of his business entities will end litigation before the U.S. Court of Appeals for the D.C. Circuit. A three-judge panel of the appeals court had upheld a lower-court opinion that said House lawmakers can see a limited range of Trump's records with accounting firm Mazars to review his compliance with presidential ethics and disclosure laws.

Both Trump and the House Oversight Committee agreed that "Mazars and its counsel shall exercise their independent judgment in determining" what documents to turn over under four categories first sought by a House subpoena in April 2019.

If approved by a judge, the settlement will end a precedent-setting battle over how far Congress can go to investigate alleged corruption by the nation's chief executive, after courts ruled on Trump's claims that he was the victim of a political persecution and laid out protections that former presidents retain after leaving office from lawmakers' probing under the Constitution's separation of powers.

A six-page proposal by the parties submitted to U.S. District Judge Amit P. Mehta fleshes out a bare-bones announcement by House committee chairwoman Rep. Carolyn B. Maloney (D-N.Y.) on Sept. 1.

"After numerous court victories, I am pleased that my committee has now reached an agreement to obtain key financial documents that former president Trump fought for years to hide from Congress," Maloney said in a statement.

- Mazars will turn over records, source documents and engagement letters from 2014 through 2018 that "reference, indicate, or discuss any undisclosed, false, or otherwise inaccurate information" about Trump's assets, liabilities or income as reported in his executive branch financial disclosure forms to the Office of Government Ethics (OGE) from 2015 to 2018, or as reported in the Trump Organization's voluntary payments to the U.S. Treasury Department in 2017-18. Records to be turned over do not have to refer to the OGE or Treasury Department reports themselves. Mazars is to turn over communications related to any concerns raised in the preparation, review or auditing of such documents or the information they contain.

- Mazars "can use all available information, including all documents in its possession and publicly available records" to identify responsive records, the sides agreed, but it is not required to undertake any new analysis. The stipulation also allows for Mazars to answer the subpoena for documents related to the federal lease for the former president's recently sold Trump International Hotel at the Old Post Office building in downtown Washington, spanning the period from his election in November 2016 through 2018, but only from the business that held the lease, Trump Old Post Office LLC.

- Mazars will turn over documents from Trump's inauguration on Jan. 20, 2017, through 2018 related to financial ties or transactions between Trump or a Trump entity and "any foreign state or foreign state agency, the United States, any federal agency, any state or any state agency, or an individual government official." Such ties do not include payments to tax authorities. Mazars must redact unrelated information and cannot disclose information about "relationships, transactions, or ties" between Trump or his businesses with purely private individuals or entities, unless Mazars "has a reasonable belief" that they were acting on behalf of a designated government, agency or official, the agreement states.

Regarding the foreign ties and transactions, Mazars may use lists provided by the House of foreign and domestic officials to search for, as well as "reliable proxies" for government officials such as hotel guests charged a "government rate" or those "known or reasonably suspected to be acting for or on behalf of" a designated entity or official. Mazars is to exercise additional care in assessing guests known to have ties to about 90 State Department-designated "Major Money Laundering" countries, according to the agreement.

The long-running case began in April 2019 when Trump sued to quash a House subpoena for eight years of his financial records dating to 2011, saying his presidency exposed weaknesses in oversight that could be addressed only with the information. The committee said it sought the documents to corroborate testimony of former Trump lawyer Michael Cohen that Trump artificially inflated and deflated the reported value of his assets for personal gain.

Trump was the first major party nominee in decades to refuse to release his tax returns, even as he declined to divest himself of his business holdings, stonewalled congressional Democratic investigations and oversaw the government leasing agency for his flagship Washington hotel while his businesses took in millions from both the federal government and foreign powers.

Trump filed suit in May 2019 to block the release, arguing that he enjoyed absolute immunity from legislative inquiries and that House Democrats only wanted to expose his data for political gain.

Srinivasan wrote that the committee had "amassed detailed evidence of suspected misrepresentations and omissions" in Trump's required disclosure forms and provided substantial explanations of how requested information could inform changes to federal law meant to protect taxpayers and police self-dealing and other conflicts of interest among political officeholders, adding that if the level of evidence did not suffice in this case the court doubted any Congress could obtain a president's papers.