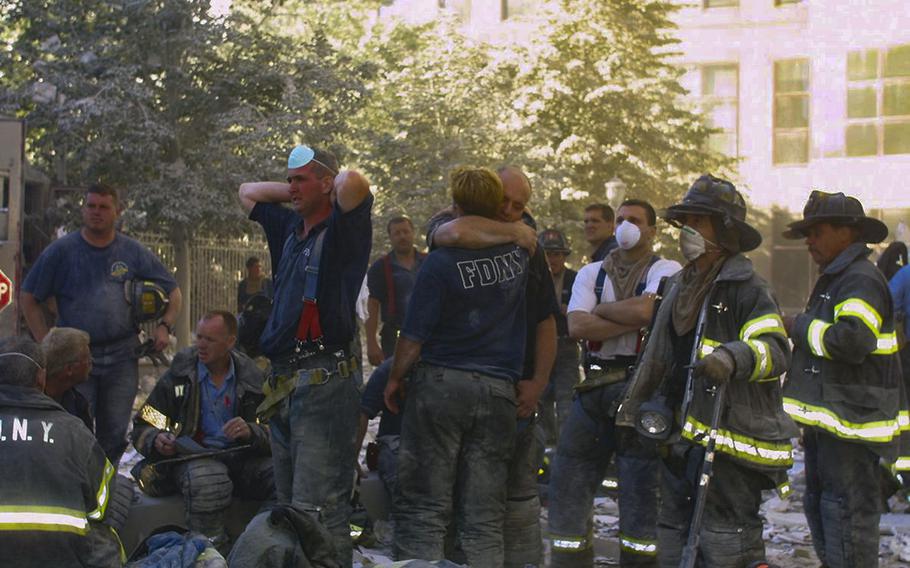 New York City firefighters hug each other during rescue operations at the World Trade Center on Sept. 11, 2001. Three hundred and forty-three firefighters died trying to save people during the harrowing attacks that day. Since then, hundreds more have died from ground zero-related illnesses. (Ron Agam/Getty Images/TNS)

NEW YORK — It appears Congress might answer the call of ill 9/11 responders before they face a crisis.

The looming issue 21 years after the terrorist attacks of 2001 is the fact that the World Trade Center Health Program is running a projected $3 billion deficit in its efforts to treat and monitor 9/11 responders and survivors — a gap that could start affecting services late next year.

In the past, Congress ignored similar deadlines, such as forcing the 9/11 Victim Compensation program to slash payouts in 2019 before eventually restoring them and making compensation permanent.

But Congress only did that after dying 9/11 responders like former NYPD Detective Louis Alvarez made difficult treks to Washington, spending some of their final days alive pleading the case.

Now it looks as if Congress may act, with sources telling the Daily News that Senate Majority Leader Chuck Schumer of New York will announce a solution to the funding shortfall Sunday, on the anniversary.

"Sen. Schumer has long championed securing the funds needed to provide quality health care for our 9/11 first responders, many of whom got sick years after their service," said Schumer spokesman Angelo Roefaro, though he declined to lay out the details of Schumer's solution.

"He is working side-by-side with first responder unions, building trades, and other worker advocates to secure the money needed to fully fund the program for all future participants and will look to pass it at the earliest opportunity."

Schumer has said in the past he would attach the money to a must-pass piece of legislation such as stop-gap funding to keep the government open that must pass by the end of September, or to the annual defense bill. Sources told The News the most likely option now is including the money in the full-year government funding bill, which probably won't pass until December.

Feal noted that in the past there have almost always been unforeseen problems. And while government funding always passes eventually, this year's full spending bill didn't pass until March — a full six months late.

"While I'm 100% confident this is going to get done, I strongly believe that it will be ugly, somewhere along the path," said Feal, adding that responders would be ready. "Listen, we come in peace, but we're prepared for a street fight if we see something goes wrong."

Ben Chevat, who runs Citizens for the Extension of the James Zadroga Act and is honoring Schumer at the end of the month, said the majority leader can spare stricken heroes from another struggle.

"If Sen. Schumer can get this fixed now, we can avoid having injured and ill 9/11 responders and survivors having to walk the halls of Congress pleading for their help," Chevat said.

While Schumer's office declined to offer specifics ahead of his announcement, the junior senator from New York, Sen. Kirsten Gillibrand, has offered an amendment that was meant for the defense bill which would plug the $3 billion gap and adjust the funding formula to better keep up with growing costs in the future. It would also fix a loophole that excludes Defense Department employees from the program.

"As the nation approaches the 21st anniversary of the 9/11 attacks, we must come together to ensure that 'Never Forget 9/11' is not an empty promise," Gillibrand said.

Some House members have been watching the Senate's slow progress on the funding gap with alarm. House Energy and Commerce Committee Chairman Rep. Frank Pallone, D-N.J., had added a fix to the massive Build Back Better Act, but that legislation died in the Senate. Since then, a group of House Republicans led by Long Island Rep. Andrew Garbarino have been pushing Pallone to move the 9/11 fix again, and pass it on its own. Garbarino and 11 other Republicans wrote to Pallone Thursday, renewing that appeal.

"Congress has a responsibility to uphold our promises. We implore you not to turn a blind eye to the hardship 9/11 responders and survivors are facing and urge you to move this critical legislation forward without further delay." they wrote.

Pallone, however, said it is up to Schumer and the Senate, after his committee already did its part.

"It's now the Senate's responsibility to take action, and I encourage my Republican colleagues to begin working on Senate Republicans, who have the power to pass this bill," Pallone said in a statement.