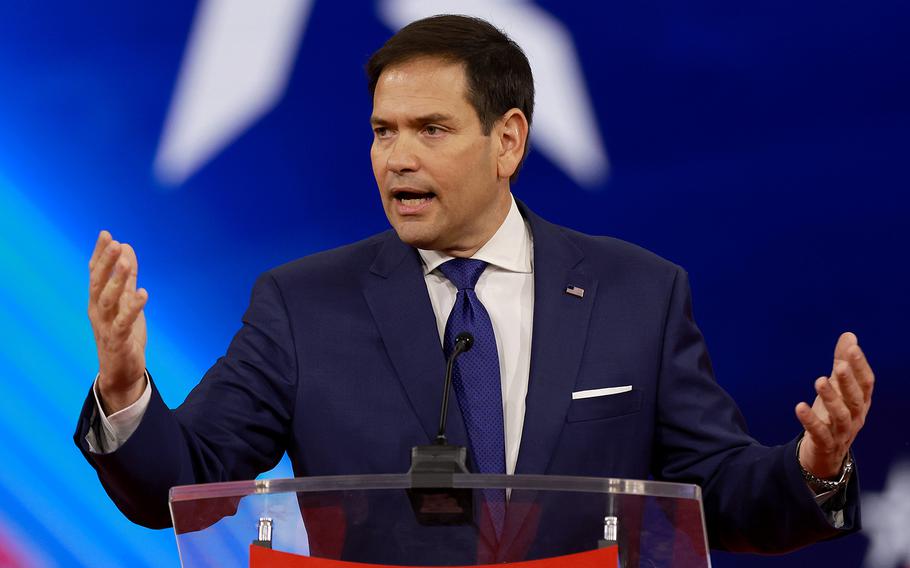 But perhaps no party leader has done so as regularly — or forcefully — as Marco Rubio.

The Florida Republican has emerged over the last month as one of the GOP's foremost critics of the Justice Department investigation, arguing that it is nothing more than political payback from Democrats, dismissing concerns about the reported sensitivity of the documents sought by the FBI at Mar-a-Lago and denouncing media leaks he says come from the Justice Department. Even as some lawmakers, including Republicans, express reluctance to talk about the ongoing investigation, the senator has charged ahead.

Some of Rubio's unyielding criticism risks backfiring as more information becomes public amid an investigation in which much may still be unknown. He initially expressed doubts, for instance, about whether the FBI was even looking for classified materials or just searching for whatever its agents could find — though law enforcement officials later cataloged the documents seized.

The effort from Rubio, vice chairman of the Senate Intelligence Committee, has caught the attention of fellow Republicans. On Wednesday, when asked about the search and whether the senators with access to classified information should be briefed on it, Senate GOP Leader Mitch McConnell demurred before suggesting reporters talk to Rubio instead.

"I think Senator Rubio has addressed that issue, so maybe you ought to ask him," McConnell said.

Rubio's defense of Trump is an extension of his long-standing support of the former president, whom he has consistently advocated for since losing to him in the 2016 GOP presidential primary. And it comes just months before the senator's own reelection race, where he faces Democratic opponent Val Demings.

In a statement, Rubio said President Joe Biden's administration "took unprecedented action against a former president under the pretense of some threat to national security."

"Instead of briefing members of the Intelligence Committee, it is leaking information to the press," he said. "The Administration owes answers to bipartisan requests for information and the leakers should be prosecuted."

The Justice Department is investigating whether Trump broke several federal criminal laws by knowingly possessing government records at Mar-a-Lago after leaving office, and by possibly destroying and concealing some of those records from law enforcement after being asked to return them.

U.S. officials from the National Archives and Justice Department asked Trump and his team to return all government documents over the course of a year. But Justice Department leadership ordered a search of his home on Aug. 8 after learning that highly sensitive national security documents remained on the property, and concluding that the former president couldn't be trusted to turn them over willfully.

"The department does not take such a decision lightly," Attorney General Merrick Garland said in a rare public statement after the search. "Where possible, it is standard practice to seek less intrusive means as an alternative to a search, and to narrowly scope any search that is undertaken."

Trump's legal team has been in a legal battle with Justice Department lawyers ever since over whether the documents that were seized need to be reviewed by an independent body, known as a "special master," before the criminal probe can proceed. A federal judge appointed by Trump has sided with the former president in recent days, directing the appointment of a special master. But the Justice Department appealed that decision on Thursday, citing an urgent national security need for the FBI to work with other agencies in the intelligence community to review the documents.

In court documents filed by the Justice Department since the search took place, government officials have revealed that 33 boxes were seized from the former president's home, including over 100 documents marked as classified. Some of those documents were marked with the most sensitive classification markings in the U.S. government.

The intelligence community is conducting a review of the documents in conjunction with the FBI to assess the potential national security damage of such sensitive documents being stored in Trump's Palm Beach estate for over a year. The property has hosted parties, weddings and other private events since Trump left office, which would have taken place feet away from the offices and storage rooms where the documents were being kept until the FBI search.

The former president's legal team has used a range of arguments in court, as well as in public, to defend him — some of which have contradicted one another. His lawyers have argued on the one hand that the president was not responsible for the transport of the documents to Mar-a-Lago, and had not reviewed them, while also claiming he had ordered them declassified as president.

They also say that the search was unnecessary since the president was cooperating with the probe — something the Justice Department disputes in its charge of obstruction of justice.

Some of Trump's personal items, such as his passports, were found among the classified documents, providing U.S. prosecutors with evidence that the president was personally handling the material.

Rubio's response to the FBI's search has included some bipartisan efforts: In August, he sent a letter with Democratic Sen. Mark Warner of Virginia, chairman of the Intelligence Committee, to Director of National Intelligence Avril Haines and to Garland requesting more information about the search and the classified documents that were seized.

A Rubio official says they have yet to receive any additional information, even though the letter was sent more than three weeks ago.

The apparent presence of classified information in Trump's home, however, has not deterred the senator, who in the last week alone has continued to blast the investigation as unnecessary.

"This is really, at its core, a storage argument that they're making, right?" Rubio told NBC 6 in an interview published Sunday. "They're arguing there are documents there. They don't deny that he should have access to those documents. What they deny is that they were not properly stored. I don't think a fight over storage of documents is worthy of what they've done, which is a full-scale raid."

During a Wednesday interview with Fox News, the senator also decried what he said were a series of leaks about the investigation.

"These people, every single day, are strategically leaking information that can't be rebutted by the way, or in any way analyzed, for a reason, and that's politics, to influence the narrative," Rubio said. "So I'm first of all very skeptical of that."

The senator has reiterated a similar message while campaigning in South Florida.