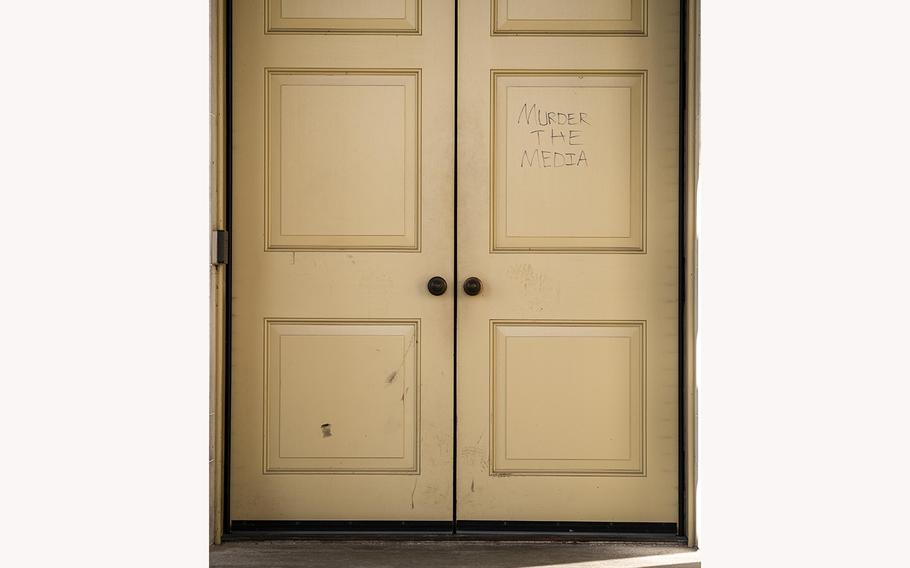 Self-described Hawaii Proud Boys founder Nicholas R. Ochs and associate Nicholas J. DeCarlo pleaded guilty Friday in the Jan. 6, 2021, attack on the U.S. Capitol after admitting they defaced its Memorial Door with the words "MURDER THE MEDIA," the name of their social media channel.

The felony pleas are the latest by accused leaders of the right-wing extremist group Proud Boys, five others of whom face the historically rare charge of seditious conspiracy for allegedly plotting to use violence to oppose federal authority and the presidential transition. Those leaders are alleged to have mustered and coordinated the movements of as many as 300 people around the Capitol that day, including some accused of fomenting and spearheading the hours-long riot that forced the evacuation of Congress.

Ochs, 36, a Marine Corps veteran and unsuccessful 2020 Republican-backed candidate for a state House seat in Honolulu, and DeCarlo, 32, of Fort Worth, Tex., pleaded guilty to one felony count of attempting to impede or obstruct Congress as it met to confirm President Biden's 2020 election victory. The charge is punishable by up to 20 years in prison. But each man faces a possible range of 41 to 51 months at sentencing Dec. 9 before Chief U.S. District Judge Beryl H. Howell under federal guidelines in plea deals with prosecutors.

Ochs, a designated Proud Boys "elder," and DeCarlo said they encountered at least two other accused Proud Boys leaders - Ethan Nordean and William Chrestman - inside the Capitol, but details disclosed in the plea did not explicitly allege coordination, and Ochs and DeCarlo did not admit to a conspiracy charge.

Separately Friday morning in Washington, an attorney for a second far-right group whose leaders face Jan. 6 seditious conspiracy charges pleaded not guilty to a four-count indictment after her arrest last week in Texas. Prosecutors charged Oath Keepers general counsel Kellye SoRelle with conspiracy, obstruction of a federal proceeding on Jan. 6, 2021, tampering with documents and misdemeanor trespassing. Prosecutors, however, said they did not plan to add her to existing indictments against other Oath Keepers leaders, although her case would overlap significantly with theirs including founder Stewart Rhodes, set to face trial later this month.

In Ochs and DeCarlo's hour-long plea hearing, the men admitted posting images and video of the incursion in real-time, stealing a pair of zip-tie handcuffs from a police duffel bag, and to damaging federal property. The men said Ochs watched as DeCarlo scrawled the name of their social media video collective with a permanent marker on a door honoring two police officers fatally shot in 1988 while defending the Capitol from an armed intruder.

"The steal is in fact right here, and we are going to stop it!," Ochs admitted shouting on video as the men marched from a rally that morning for President Donald Trump near the White House to the Capitol. Ochs said he traveled to Washington after he heard Trump invite supporters to attend a "wild" rally.

Ochs and DeCarlo said they recorded themselves breaching the Capitol grounds and agreeing they were "all felons" now. They also admitted to throwing a smoke bomb each at police, although DeCarlo said he forgot to pull the pin.

The men entered the Senate Wing Doors minutes after it was broken into at 2:13 p.m., they admitted. Inside, DeCarlo shouted, "Where's Nancy?" and both men shouted "Nancy's office!" while pointing from the Capitol Rotunda toward an office for Speaker of the House Nancy Pelosi (D-Calif.).

While approaching the Rotunda and inside it, they said they encountered and had a group hug with Nordean - accused of being a key leader in assembling Proud Boys to Washington who breached police lines and another member they said they did not know previously.

Nordean and Chrestman have pleaded not guilty.

After leaving the Capitol, Ochs said in a video posted on an encrypted messaging application, "We came here to 'stop the steal,' " to which DeCarlo responded, "We did it!" Ochs said he added in an encrypted Proud Boys 'elders' chat, "Sorry we couldn't go live when we stormed the . . . Capitol and made Congress flee."

Ochs demurred when Howell asked whether he held a senior Proud Boys leadership role as an "elder," replying after consulting with his attorney, "This isn't some concrete mafia group. . . . It's just a term of respect."

Unlike with most Jan. 6 defendants, the pair's plea agreements did not include a requirement that they submit their digital devices and social media to the FBI or participate in an interview. Asked why by Howell, Assistant U.S. Attorney Alexis Loeb said prosecutors were satisfied with an FBI interview with Ochs before his plea, search warrant returns, and discussions with DeCarlo's attorney.

Prosecutors dropped five counts, including conspiracy and destruction of federal property, and misdemeanor charges of theft and trespassing and disorderly conduct on restricted building or grounds.